Less than a turn of an hourglass ago I sent an “Apology Note” to the Great Keeper of the Library of Bletherad. Growing up sucks when you are embroiled in a war between light and darkness. I hope the Keeper finds me worthy enough to pass the note to your predecessor as Scribe of Light. We shall see what will be.

Less than an hour ago I helped in the murder of four Minotaurs. They were members of my tribe that had betrayed and two I knew for certain had helped in the slaughter of the elders of my Tribe. My mother among those that I had to perform burial rights for. We made it through Karl’s Maze and recovered the Lawgiver’s Right Finger, which we returned to our “Leader upon Land”, and have made some unusual allies but I’ll leave that tale for others to “wax prose” about.

At the time I wrote this I was unsure how they were going to vote, while these weapons had been in stewardship of tribe many factors weighed on me.

Still coming to grips over killing people I had known personally and very well over the years of my life I quietly began laying out the loot in my room and asked everyone to come and listen to a proposal, then vote on it before we got any further rest. I laid out the magical leather armor which would need a good cleaning before the blood and bone bit of it’s hooman owner would be gone. Next to it I set the black leather and iron bound spellbook, which is written in Dwarven! I recognized it from the Etrinan collection! Master Aesyl would be so happy!!!

Tell them about the ring!

Then came the Runic Ring that had begun speaking to me and even Callandor said non-weapon rune items seemed rare to even him.

It is true I have never heard of one.

While this may not be completely accurate I believe my proposal was along these lines, “My friends, I have had to slay four people I grew up with. The twins, Nav’rox and Xor’van were part of my brother, Zeelik’s group. They must have switched sides to avoid being murdered, but that is still a betrayal after they chose to attack me, another tribemate. I wanted to save them but when they hurt my friends they made their choice to stand in the dark. Their horns I have taken because of our beliefs of the after life. Without the Horns our tribe believes your gods will not accept you as whole and a broken soul wanders the realms of the dead forever with no home and no afterlife among the worlds beyond ours. After what they did I felt they did not deserve an afterlife as a Minotaur.”

I believe that next I turned to each of the members of CrIsis letting them know something I was thankful for about them.

Looking now down at the six rune weapons I named them off and what I knew about each of them. It was so good to see them again even if the circumstances were horrible. I began with gesturing at the the large 7ft spear that Mar’azhu was so fond of using in either single or dual grip stances. Let me continue… 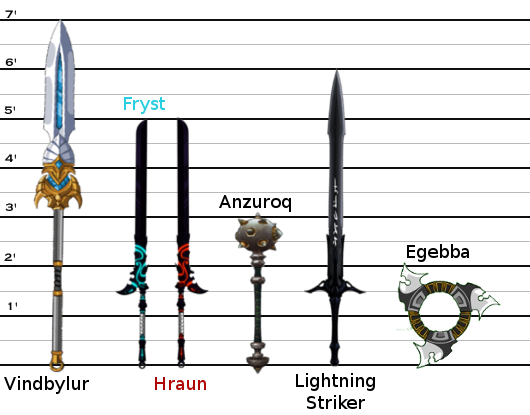 Vindbylur the Lightbringer Runespear, A dark grey war spear with golden accents and golden runes. It was wielded by a priest of Horus in his tribe, Mar’azhu, whom died in the third raid on the Temple of Isis in Troker to save the day.
Fryst, this black, single edge greatsword where its runes look as though they’re ice breaking through the surface of the blade was wielded by Xor’van – one of the now dead twins. it always kept the owner cool in body and mind.
Hraun, the fitting twin to, Fryst, where the only difference in appearance was its runes look as though they’re lava beneath the surface of the blade trying to crack through. It was wielded by Nav’rox – the second twin. In personality it was the polar opposite of Fryst, it always kept the owner warm in body and passionate of mind.
Anzuroq the Stone Mace, a long grey “stone” rune weapon that can bring the power of earth and petrification to bear. It was my brother – Zeelik Stonemace’s & my second father – Rostam Stonemace’s weapon.
Lightning Striker, a massive black two-handed sword with silver runes that didn’t talk much and preferred communicating in dreams. It used the powers of air and its namesake to wreck havoc for its rune-friend. It was wielded by Zii’clymnt – a one time friend – before he murdered my brother Zeelik.
Egebba, this chakram or bladed flying ring when translated into Elven speech from Dwarven. I couldn’t help but touch it fondly even though it nearly tried to kill me less than an hour glass turn ago. This one is a patriot of its bonded rune-friend but loves a good scrap, and I am just glad it didn’t turn into its three duplicates when Groun’na threw it at me. Groun’na is the one that betrayed my tribe and gathered others to the banner of the dark!

These old friends are the legacy of my people. Growing up I used to sit and talk with all of them so they would not feel lonely. However, this group votes and I would like your vote as a group to perform a small mission and hope you all to come with me. We now have the ability to perform some of the minor tasks we have been given, which I feel will have a great impact in making our reputation seem more trustworthy.

First, their is a sword and harp that need returning and if we do it as a group ritual then we can perform these tasks.

1st Vote: Will you allow me to return these rune-friends to my father in Sekti-Abtu, as an elder of the tribe he can best decide what to do with them. Before you all answer please know that you have an equal say since without you I could not have succeeded against those foes. It would be wrong of me to not seek your judgement on this issue.

2nd Vote: Would you come with me as I present the horns of these traitorous Minotaurs to my father. Then we preform a group ritual and teleport back here to this room. Regardless of the first vote I intend to do this so the tribe knows they have been dealt with and can move forward in whatever manner they can. Brother Indaris, on a side note could you help me figure out a way to officialy join the Church while staying a wizard? Is there someway to become a Mage-Priest, Magi-Crusader or some such thing? I would be a like to serve Osiris directly more in line with the Church of Light.

3rd Vote: I would like to give this book on Shadow Magic from the Etrinan Collection to Master Azariel. Groun’na looted from the library but at that time our law would have allowed him to take it and do what he wished so he broke no law giving to the now dead elf wizard. Master Aesyl liked you and he never liked anyone I could remember. I would just like to study a spell or two from it but I want you to have it so you can make some magic items other Alchemists can’t.

4th Vote: I would like to keep the rune ring? It has been speaking to me and likely both of you (I was looking at Masters Azariel and Burlap). You see when I gave back the giant crystal to Gromhuran I had given up the tribal rune item I was to possess. This ring would allow me a rune item as most of my old tribe have once again but was not part of the Etrinan Tribal collection. Also I know I currently possess Callandor and we are forging a bond unlike any seen since the Time of a Thousand Magicks! I have taken a part of my soul and tied it to Callandor, so when I die part of me will always be bound to it. I will be immortal in a fashion I believe. However, when I see Mary I intend to give her Callandor and make it a legacy of the Glandar Clan. It will be wielded by his children the way my rune-friends are cared for by my tribe. It is not a light decision but Callandor has a family he just doesn’t know it yet.

WHEN WERE YOU PLANNING ON TELLING ME!?!?!?

Stop! You have access to every thought I possess even ones I find embarrassing! Nothing was hidden from you. In order to keep my promise you will never be alone we have to finish bonding for the spell to complete. I am fairly certain you can feel that as I can.

YES I CAN FEEL THAT LINK!

Wha, …
…Was that really necessary? Would you protect Overkill’s wife and children?

Then you know the same way I am trying to get the rune weapons back home I would do the same for you.

I had to explain to my friends why I looked like I was talking to my hip where Callandor was because they got to hear my part of the conversation. I elected to describe “elf-humper” in more pleasant words. Everyone still laughed, sigh.

Now I just await their decision as I finish this up.

>> Written by Xerx’ses Goldenhorn, upon the of the wee morning hours of the 27th of Set, 70th Year of the Wolfen Empire, 2nd year of King Guy the First of the Timiro Kingdom, and 343 year of the Dominion of Man. <<

Lady in yellow dress, picture by Nomuh.
Anzuroq the Stone Mace from Cremuss.
All other weapons are found on AQW-wiki.

I tried a very sneaky approach to putting a Thanksgiving tribute to the characters of all the players I enjoy spending so much of my time with. KillerVP Brother Malkin represents you when you see it. Cheers from America to my Tasmanian friends!

“I hope the victory over the Dark was tasty even if their hearts were bitter. " Amen….

A hearts a heart, personally Cami and Nosse didn’t find them bitter at all :p

I’m sorry I totally forgot you two ate them as well! Ack, my bad!

Asher had a god idea, and I have some leeched over paranoia about things coming back :p

Redbeard Forever The search for pirates

A Riddle Only A Sphinx Can Answer