A lone Kobold monk creaks open the stone door that should be much harder to turn were it not for the engineering of past civilizations. The monks visible hands change shape in the process of pushing on the door in the torchlight from a Kobold’s to a Human’s. In the room is a long table and lit by candles and three iron chandeliers. Smoke vents through unseen vents near the ceiling as the room is warmed against the winter of the past few months.

In the center of the long table is an object shrouded but four heavy (3 centimenters thick by Elvish measurements) crystal legs stick out from below its leather shroud as four small votive candles surrounding it. Sitting at the center of one side of the table is an eldery human woman and white and black robes. Next to her is a human in a cloak, however, his plate armor is visible beneath its opening and glinting in the candlelight. On either side of these two sit more Kobolds, three Goblins, two Ogres, seven Orcs, and four other humans one of them was elderly, like the lady.

"You’re late," muttered one of the Orcs to the human-shaped changeling.

"My Lord, appreciates all of you coming," replied the human-shaped changeling ignoring’s the orc’s disapproving grunt, "especially, both your eminence, your lordship, and our famous writer."

Tossing several copies of the most recent Books of CrIsis on the table to everyone the human-shaped changeling goes on, "Some mystic pigeons, bards, minstrels have been spewing forth words about the funeral hymn of the Golden Minotaur and the hearts that bonded with him over his pain of loosing his friends.
…brief pause…
While he is not the first member of this group to be non-human, nor is he the first to strive for redemption in the eyes of the races seen as “good” among the dominant nations of our world. He likely doesn’t realize that he may be the most successful chance all of our various races have!"

"Wait!" uttered the grumpy orc, "That tune was an old Elvish hymn sung before the Elf-Dwarf War! How the hell did the Golden Minotaur even learn of such a song?"

Everyone in the room perked up!

"W-W-What if he is not lying," queried one of the Ogres dressed in monastic scholar robes?

"That is a good point, and my lord has been looking into their past. Providing aid where it won’t tip his hand or profits to do so. However, the information gathering has been very successful."

"In what way, spill it! How does the Golden One remain “Gold” and not simple “Brass” hmmmm?" demanded one of the legitimate Kobolds in the room.

"The stories of his home have to be true," the human-shaped changeling retorted and then continued, "While the dates are unclear so give or take about three or four centuries in either direction. The Dwarven Empire established a Fortress City of small for that time below the Golden City of Baalgor! Now, now, let me finish, so before the destruction this was done. Other stories of the once jungle paradise corroborate that mass graves of Minotaurs were found and many monks & priests of the Elven New Kingdom placated the spirits to help prevent undead and ghosts. However, not all the Minotaurs were dead. Whether the Entrinan Fortress was named for the Minotaurs of that “tribe,” or the Minotaurs of that “tribe” adopted the name of the Fortress is unclear. A friendship developed among them and in a noteworthy act of good will that influence likely changed the tribe into good and caring members of their race. When the “Great War” broke out they sided with the Dwarves. Now from what I was able to gather through a contact that is indentured to a group of Wastelanders that I’m not sure where their species originates from. Well the contact said he had spoken at length with the father of “Golden One” during a chance encounter with them and a boot of desert liquor. According the father the “Golden One” had never been to the surface before he was chosen to serve in the Gods’ holy quest. He had only studied from a fraction of the books that were available to the tribe because of what happened after the war and he did not truly understand how long has passed between the “Great War” and now. After the great disaster it seems the last surviving Dwarves even seen by the tribe, all scholarly monks arrived with thousands of books and filled the library. They never left and died a few hundred years later passing on all they knew about what had transpired above. The Etrinan Minotaurs vowed to keep their secrets and buried them with the rest of the kin that died during the war.
…brief pause…
So it seems he doesn’t completely grasp the importance of the books in his possession. That is the only way he didn’t lie."

"I have to inform my superiors if any of those books might still be out there!!!" exclaimed the Ogre dressed in monastic scholar robes.

"So, what you’re saying to the rest of us is he only thinks he is trying to help his race be seen for their hearts and not their past deeds of eons ago. He has no idea that he is likely forcing people to re-evaluate how they view all non-humans," stated the grumpy Orc.

"Precisely. Now, may I direct your attention to the leather shrouded of crystal upon the table," the human-shaped changeling gestured with his hand, "What you are looking at is a relic of the Titan scholar, Newton-Asalow. Great grand-father of the Titan leader, Kinto-Asalow. The Titan that told the elves they would not support there actions that led to the “Great War” which followed. Now the most amazing thing about I will show you is that NONE OF THIS IS MAGIC!!!" 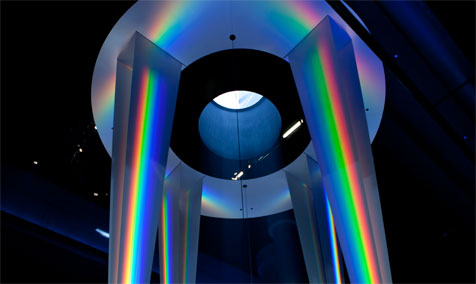 Now everyone was paying attention.

The human-shaped changeling walked over and reached down to remove the shroud and light hit the crystal object cascading rainbows around the room!!!!

"I can sense no magical energies from it," said both a Goblin and Human that had raised their hands at the object.

"Why are we focusing on the “Golden One” then," asked the grumpy Orc?

"The “Golden One” swept the Lopanic Games, he won the hearts of the crowd to a monster race told to scare children, and now with his funeral hymn he was shown the world monsters actually feel like they do.
…brief pause…
However, I am helping him because of one sentence barely mentioned in the Books of this group.

…I have to admit part of my anger was the desire to crush this fallen race of light, this Changeling that had turned to the Dark in Gavin’s and one other’s name…

He knows we stood for the light and he knows that there are those among our people that still are good. It is said he wept for the impostor Empress. His tale must be spread and that is why I made sure a writer heard all of this. Decide to do with it as each of you see fit. Have those you know to be good make their way to Sekti-Abtu and offer themselves in service of the Light. This effort will seem small but begin growing with steam.
…brief pause…
Should the Company of the Dead God succeed they will change the world!!! I am off to talk to my people about aiding this cause as we did in ancient times."

Those present nodded the meeting was over. The last to leave was the elderly human male having just watch the elderly human female and her plate clad protector teleport away via scroll. He sat there alone in the rainbow colored room. Moving the candles to verify the light did behave the way the object made it appear to do so. As he left and walked to his carriage to take him to Nisi. He stopped to listen to a pair of Elves a knight and squire discuss how dead Elf warriors were coming back reincarnated as Minotaurs to deprive evil of such creatures. On his way out of the city he heard a minstrel singing “The Golden Goodbye” in the street.

The world was indeed going to change.

A war of ideas and the soul had begun.


Scene takes place somewhere on the 4th of Grekar and is seen via a vision by Brother Malkin at that time.

Picture from Museum of Science and Industry Chicago.

I hate it when one of my players gives me reasons not to kill him, lol….
Really truly brilliant- way to think completely out of the box AZ_Rune!

The first unofficial meeting of the Order of the Rainbow.

Great piece. I love the ironic characters throughout. My only question: “What poor Scholarly Monk did that Ogre EAT in order to get his robes?”

Ask yourself a better question, “…why does he refer to the one kobold as legitimate?” Know ye this and thine question will be no more.

I really enjoyed how everyone talking had their own font.

I thought that was important to help distinguish between speakers.

A meeting of changelings, and changeling sympathizers. The legitimate kobold, truly is kobold, not changeling…

A WARNING End of an Era