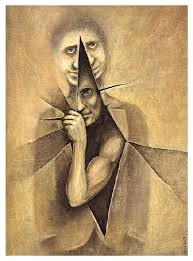 I have been having a nightmare for the past two weeks – I fear the stresses on my mind are taking their toll.

I stood at the foot of a sheer cliff. Harsh winds cut my face, and the stench of rotting flesh filled my nostrils. Fog surrounded me so that I could only see a few paces in any direction, but I could feel that I was in a forest – possibly the Yin-Sloth; the pressure at my back, as I faced the rock, was only too familiar. I could hear sounds, but they were muted and distorted, as if my head were underwater. I felt my body chill, as though touched by Taut; the Darkest; the Heartsbane.

Through the mist, I saw massive eyes, red like blood, and glowing. They were several paces in the air, and they were pointed straight at me. I heard a roar and felt the breath’s heat brush past me, humid and suffocating. In my fear, I drew a massive circle. I knew that I could defend myself, if I could only finish the circle. When I started to chant the words of power, names of men and gods long dead, the beast started to charge. I could suddenly see it, no mist or wind stopping my vision, and it was leagues away. It was the form of a jackal, walking upright and as it came closer, it shrank.

I chanted the words, their cadence falling into time with the beast’s massive footfalls. With a final “Iacta – Est!” I completed the ritual. The summoning was complete; now for the control over the being. Only then did I realize what words I was using to summon. It was my own name I was chanting. Staring down at me, I saw my own face, etched in anger, hatred, and stone-cold, remorseless intent. Our eyes locked, and the Battle of Wills started. My mental defenses are strong, but caught off guard as I was, I was no match for my alter-ego’s attacks.

A thought stirred in the back of my mind – Why fight? It IS me, right? From the power emanating from… me… I think I can defend myself. In fact, I think I will offer him control. It has to be me, but the Strategist, right? Why fight it – him – me?

Power started to flow through the circle under my feet into me. The fear ebbed, replaced by confident dominance. All of my fears, inadequacies, and inhibitions were washed away by the tide of power I felt at my toes. This wasn’t some alien being. It wasn’t a demon or god. It was ME. This power is MY power. Why fight it? I didn’t. I was Azarevil.

I looked down at me, tiny and afraid and I felt cackles of glee bubble up from within. I never had to feel fear again. My over-sized foot fell on top of my tiny form, and banished it with a satisfying crunch. I whirled to face my attacker. It was so huge when I was weak – when I was afraid of my own power. Now, it seemed inconsequential! Pure, hot, electrical power arced from my bosom through my arms. The power of life, undiluted and twisted to my own will, lanced out like lightning-fast serpent’s tongues, tasting the air and searching for my prey. At last, the power found its target, and the beast wrenched in surprise and pain.

I saw its pain, its suffering, and I did not relent. Contempt for its weakness overwhelmed everything else, and I pressed harder. It Would DIE. Through the power connecting my arms to its almost lifeless body, I raised it, and brought it in to me. I opened the jaws of my soul, and devoured its power. I felt its pain rack my body, and its hatred sent pins and needles over my arms and legs. I was its master, now. With a thought, its struggles stopped. I grew even larger, so the cliff that was unfathomably tall was now a mere footstool. I saw all of Palladium, and it was mine. I walked through the forest of mortal mens’ structures, leaves crunching underfoot. The stars above me warmed me with their power. I bathed in the oceans, and laid my head on the mountains to rest. I was God, and I had come to wreak vengeance upon the world. Mortals were disobedient children I had to castigate.

I opened my godly eyes, and stood on tiptoe to grasp the sun. Before I swallowed it, a sharp pain in my foot brought my attention back to the earth. I shrank back to my normal size, at the foot of a Pyramid of the Lawgiver.

I looked around me, and I saw great swaths of devastation. I was in Shandala. The Guild of the White Ash lay in ruin, rubble scattered about for miles. The pyramid was untouched by my reckless, remorseless hand, and suddenly my withered heart began to beat. The pain, fear, despair, and loss of all of my victims filled me, blinding my eyes, and muting my hearing. I knelt in repentance toward the Pyramid of Osiris, rocking backward and forward, unable to scream from the infinite ocean of pain drowning me. I looked up, and set my teeth. One thought hit me like a cudgel: Where is Sezar?

I rushed to White Ash. Before I was closer than a league, I heard the cries. Jumping over boulders, and dodging scattered trees like toothpicks, I pushed my legs harder. I saw the survivors, a mere handful of people, picking through the wreckage for some sign of their loved ones. I ran along the familiar yet now-alien streets, ’til I got to the home where Sezar was. The skies cried over its near-lifeless heap. There were a few people walking aimlessly, still refusing to believe the death and destruction around them. “Help me!” I cried to them, but they turned their backs on their would-be god. How many of their cries had I shirked so? I started to dig through the rubble, feeble cries becoming louder as I got closer to my victims. I moved a great beam, and there on the ground, huddled in its mother’s bosom, was an infant, its feeble heart struggling to beat; blood bubbled at its mouth and nose.

I did this. I didn’t even feel the pain until it was too late. I thought they were leaves, fallen already, not sprouts starting to grow. That crunching underfoot, forgettable and ignorable while wielding my power, was my wrath and vengeance destroying all those that I love, and those that I had no right to harm. – the Innocents. “In casualitatibus pessimus de guerra sunt innocéntem.” The worst casualties of war are the Innocents, a philosopher once said. Holding this struggling babe, I now knew what that means. The child changed before my eyes. It grew fur, and a little tail snaked out from under its gown; whiskers tickled my arms, and the ears pulled up in points. I heard feline growls grow around me, and they started to vibrate the rubble around me. They grew in pitch until nothing was stationary, and reality was bending and straining under the shuddering sound of feral hatred. I hunched closer to the ground, and wished that I could bury myself under the rubble. I feared for my life.

That is always where I wake up.

I have been neglecting my prayers. I always offer thanks in the moment I am blessed, and I ask help or forgiveness in my heart, but I have been forgetting my ritual when preparing for bed, and when rising.

I would meditate for a half hour, pondering upon my goals, and upon existence. I would offer a prayer to Osiris, in remembrance of his life, his death, and his imminent resurrection. It is more of an orison, memorized and recited word for word. I think I might dream less about my fight for compassion within my quest for power, and would be able to focus better on the tasks at hand if I were to pick it back up. Perhaps I shall.

Power to Osiris, and Glory to Ra.

>>Journal entry from Thoth 1st in the 22nd Year of Emperor Voelkian Itomas II, from Azariel, Apprentice Alchemist. Acolyte of Osiris and the Lady Luck <<

In a word, powerful!

Truly captures the mental battles of a summoner! Great piece of work!

These magic using types are such complicated souls! ;)

And by “Complicated” you mean twisted. haha. Thank you all.

Great job, again. Truly perplexing. What a great description of an internal struggle. Hoppefully, Azariel can learn fromthis dream and be better, do better.

Hey, Azariel- Your Dad Is Dead So You Shall Be Soon Without a Change of Heart

A Word for the Bard