This will be a short rundown of what happened as my time for writing this is short.

What an up and down ride the Titanic Games have been, we have physically tested ourselves against the best the world had to offer and while we were bruised and beaten in the end, and there were more twists and turns then Tiimiro’s poor quarter. I can say that however that I am sick of this place and will be happy when we leave it, the assassination attempt a day is bad enough, but having Xerx’ses winning 2 events including the dueling, and not getting the Lung, and worse still, the Follower of the Dark attempted to teleport out of the Tower so we couldn’t even follow them to find out where it was going, but as always their trick was misdirection and rather than teleporting they actually did the old trap door down trick that has worked so well for them before, but this time, thanks to the sharp eyes of Tyvernos and Xerx’ses they were followed out into the town proper. Azariel and I headed to the Heal for a Steal to make sure they weren’t leaving that way, and the others took off after them, and from what I was told they didn’t put up much of a fight and were handed over to the authorities to be dealt with, and then will be hopefully sent to Sekti-Abtu for a further reckoning. Heal for a Steal however was a trap, and the Dark had left a majorly powerful death ward behind that we disturbed, and this killed a lot of nearby inhabitants, but luckily for us The Lady Isis’s power flowed through me like a flood and I managed to bring all but a few back into the warmth of life.

The evening was also as event rich, The Lord WordSmith, Thoth himself came down to us to advise us in our time of trouble, and he did indeed clear a few things up for us, but mostly told us to be true to ourselves, oh and the other thing, my severe diatribe against demon summoning to Azariel seemed to have the opposite effect I was hoping for, he admitted to secretly, and against his word, summoning another Demon, he actually asked The Lord Thoth to help with some magic to bind him to his word and us, but that wasn’t what I wanted at all, if that sort of magic needs to be used on a companion to keep him true, what sort of companion would he be, we all make mistakes, and I would much rather be with him if he summons a demon, to help protect him if nothing else, than for him to be doing it secretly and in the Dark, and The Lord Thoth said words along the same lines. 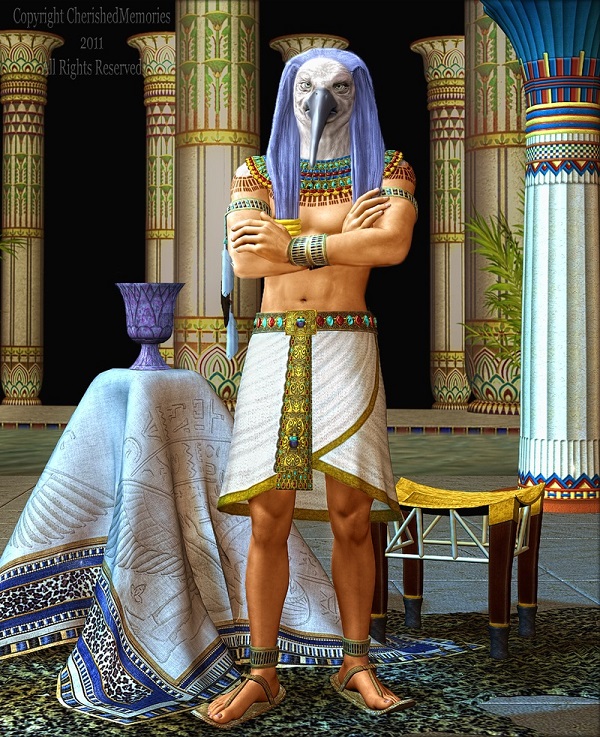 Just like in the other places a miracle has occurred and Thoth showed himself here in this place, and just like Troker I’m going to endeavour to raise a shrine of good here to work against the foul plots of the Dark, and hopefully help bring the foes of the light to the courts for an accounting of their crimes, but hopefully as CrIsis leaves so will most of the machinations of the Agent.

On the good side, even after all that has happened to us, we seem to be closer. I will be happy when we leave this Island, but we had a few more things to do before that happens.

Happily there was a new ceremony for the Lung and it was passed to Xerx’ses, whom I believed always deserved it, and we had a small celebration ourselves and we were in for another surprise. The Defilers had us for breakfast, and what a breakfast it was, they told a few little anecdotes and they all asked if there was anything we needed, and with all that was going on all I could think of was a tale from them, which we got from their mouths, it was a fun affair but slightly uncomfortable as we were in the presence of living legends. I also managed to get Perfone aside and asked about Oathebringer and she gave me her condolences, that isn’t very comforting but she did give a few helpful tips on getting along with her.

Unhappily Tyv was going to have to leave us again for his tasks had not yet finished but he gave a small hope that he might once again rejoin us once done. We all then said our goodbyes and went off to resupply ourselves with magic and items needed for the coming adventures. Xerx and Az needed a bit of training so I followed Overkill around while he was looking for his old fellow companions and I got to meet an interesting and strange group of people and all Overkill could find was a few of the female persuasion, and I believe Cammy found some quietude to relax in. Asher meditated a lot, I guess he was looking for unknown answers but I’m not sure if he found what he was looking for. Eventually we gathered together again, and finally left the Vegie shop that had been our home for these past months, and left for Rogtilda.

The trip back to Sekti-Abtu was quiet and uneventful, and I was hoping to meet the bandits we had had a run in on the way here, they might have waited for us but the I guess the pickings of the other visitors was more than enough for them (or they met some knights). The week passed slowly and we enjoyed the leisurely pace back, I was practising my new telekinetic abilities by trying to swap condiments on people while they were eating, but it was hard to say if I was successful or not but I guess having to live on some the things we have extra spicy soup probably isn’t all that noticeable. Eventually however with the sun setting to our backs, we rolled back into Sekti Abtu.

p.s. could you please send the following description with the painting provided to my brother, he would love to see and hear of the fights.

Ever had that moment, when you look over shield, across the blood soaked sand and wondered, what the Hades am I doing here? You watch your opponent closely whilst keeping your shield firm and high, looking for weaknesses in form or chinks in armour, and only see rippling muscles, determined eyes and a very well trained practice swing that sends what looks from your point of view to be a 9ft sword whistling through the air. Armour, muscle and bone would barely slow that thing, and all you have between you and it and death is the green and white ceramic enameling over the reinforced steel of your shield.
You both charge.
Your heart hammers as your opponent thunders towards you. You would swear he’s 12ft tall, the light glints off the horns on his head and down the deadly edge of his sword.
You jump forward with all your might and swing as hard as you can, his sword does an intricate weave, and deflects your blow, the razor sharp point of your weapon flashing down his past his arm along his sword, sparks flashing into a brief firefly’s existence, down past his greaves and crashing into the ground, and then the weapon in his other hand immediately flashing around the from his other side and slams into the hilt of your weapon, sending it spinning up and over the sand.
Yes I have had one of those days. 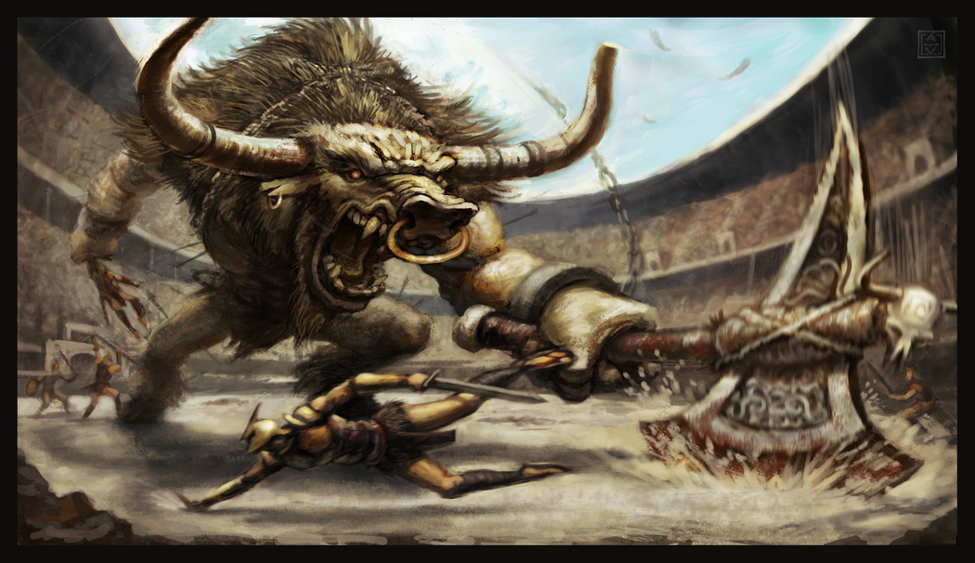 Yes bro, that is what I fought. Luckily this one likes me so I didn’t get ripped limb from limb.

This was awesome! I loved the commentary to your brother about the fight! :-)

I think the pic says it all :)

I really like all the behind-the-scenes details that seem to get overlooked….

I luv the piccy

That image is epic.

A Defiler Story As Told by Xar Xar