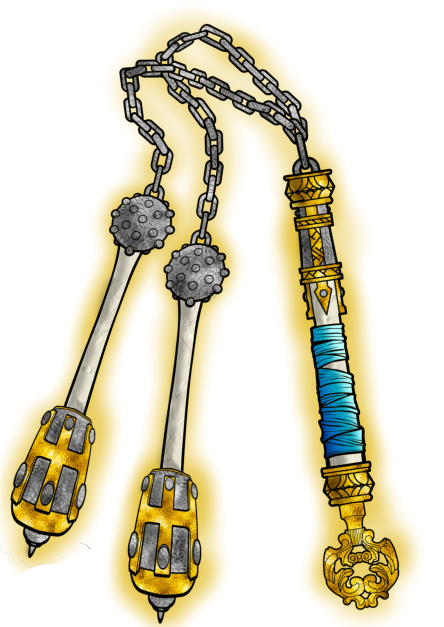 I have seen the promise of, Apis, take form and aided in the construction of a holy weapon dedicated to Osiris! I was asked to keep a secret till the Festival of Apis, about what the gift is so please don’t publish this till after the coming holiday.

I was returning from Auntie Ev’s place when I heard a voice say, “I’m going to teleport you.” Then before I could blink I found myself in the Pyramid of Avramstown looking at an ancient elf standing next to the Tongue of Osiris floating in blue flame as it is suppose to be.

He introduced himself as Greminor Lector and he was part apologizing and part commissioned by the Gods of Light to make a holy weapon for their new demi-god! I had no idea such an event had taken place. Azariel appeared briefly in his official robes as an alchemist of the Church of Light and Dark, and he presented several components to me and Greminor including the bones from King Sunder Blackrock! He teleported away as fast as he arrived but had an angry look on his face. Greminor chuckled when I asked if he knew why. Apparently Azariel is pissed he was not selected to build Osiris’ Unyielding Strength’s new holy weapon! Xerx’ses is immortal but now he’s been elevated to Demi-God!!! Greminor nodded and added that while he knows the spell hymn/prayer books to make a holy weapon they require a powerful priest or priestess of light to read and draw the magic of the gods through them. I was the final missing ingredient.

As we left the Pyramid and ventured to his shop it was night and we were cloaked in magical darkness. So I cannot relay what I saw of Avramstown’s current situation. It took a week of time to make, sanctify, and enchant the new flail. Scouring ancient text we have elected to call it Prodromus Lex, or in Eastern and Southern would translate to the “Harbinger of Law.”

However, when I had left only a few hours had passed and I was teleported straight to my room on Rogtilda. There are still two items of import I must convey.

Bishop Tutu please inform his Majesty we sail for Timiro on the morning tide and Rogtilda will spend its final days in its favored home of our kingdom.

Professor Malkin, please inform the Librarians and their Guardians of the current events. They will need to pursue the books in Shadowfall and Bizantium. We will be headed north shortly but it will be to engage Terosh and stop the destruction of Bizantium. Be careful, the same demon that held Duke VasPasseon under his sway has a cohort in the impostor Queen Fala performing the same trick. Spread the word.

I will write more about it later but we have defeated Ratel and the dark god Kirgi! The great rat revealed that he is the true leader of the Zealotry before attacking us personally!

Sleep calls but I had to share this miraculous news of my friend’s elevation with someone.

May the blessings of Isis be given to thee,

Sent via Greminor upon 12th of Gryphon after his being sent back to Rogtilda. Upon the 4th Year of King Guy of Timiro.

I guess it’s official that Xerx’ses is considered a Demi-god now? Congrats! I love the idea here that the gods spirited Indaris away in order to do this. I can’t wait for the weapon to be unveiled.

I like how the flail ends look like mini bone & steel stonemason gavels. I love the name and cliff hanger about fighting a god!

I really like the arm bones in it, looks mighty cool.

@Toko- Greminor Lector will be happy you referred to him as a god. Nice teamwork on the log Indaris and Xerx’ses.

OK, seriously, I just read the description, wow talk about “Harbinger of Law”. Carry this just made the wielder a walking lie and evil detector. Now you just have to fit an entire jury inside.

To The Esteemed Commander Of The Dawn

A New Era for CrIsis