He Wears Many Hats

Walking though the streets toward the docks in Sulanok is not for the faint of heart and skill. The swarthy, darker, skinned man dressed in colorful robes and draped in an abundance of steel jewelry etched and inscribed with symbols. When one of the older street urchins got to close he flicked his hand in disdain sending a jolt of lightning thru the would be thug.

A raised eyebrow to the brief crowd as he continued onward was all the care he gave the youth with a blackened arm and leg. He would heal – the robed dark skinned man thought to himself. Snapping his fingers he heard the footfalls of his Orc manservant. Carrying a large wooden crate bound shut and carried in a make shift rope harness. Together in single file they made their way through the smells of spice, fish, and sweat. Standing at the gangplank's base of their destination was the one elf on the street. Platinum blonde hair was bound in a braid. Naked from the waist up with spiked leather bracers running to a heavy set of knuckle dusters. Billowing silk sash, linen pants and heavy leather boots completed the look. The plethora of scars upon his skin suggested that he had been a gladiator, or worse the victim of a dungeon master with a taste for flesh. The dark skinned man swallowed hard when he thought about it being both. 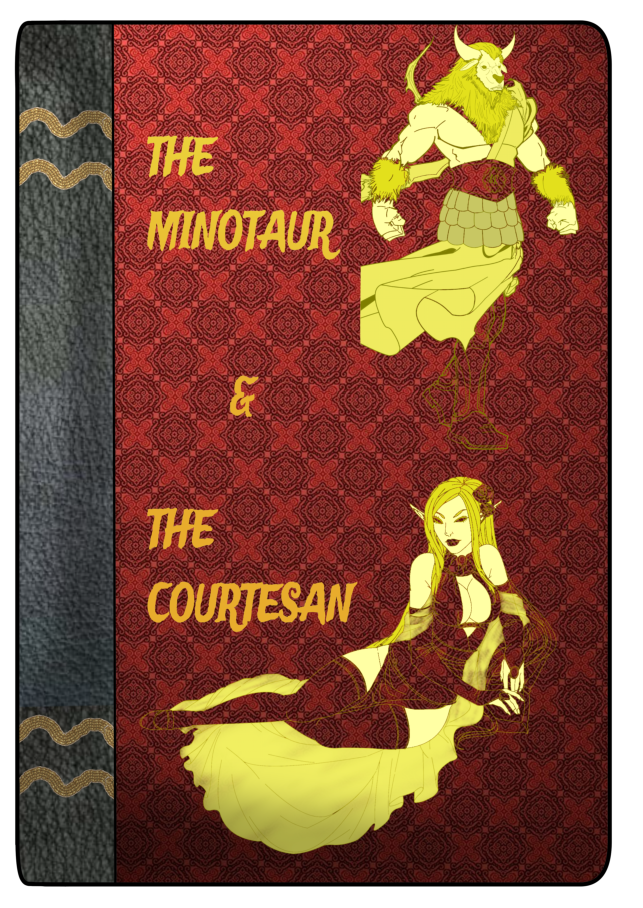 "Book, please, and entry is yours," the heavy western accent to his native Elvish words told the dark skinned man he had at least been in an among the Gladiators of that land for sometime. The dark skinned man handed over his copy of 'The Minotaur & The Courtesan' and waited for the Elf to turn to page 69. Upon reading the passage he nodded, "Master J, you and your companion are welcomed aboard the 'Shifting Tide' good ser." Upon entering there cabin next to the captain's the Orc manservant sets down the crate. The crate bearing the emblem of a scale with a "K" in each bowl. The symbol of Karowyn’s Merchant House was known to many in ports across the more civilized spots of the world. The Orc shuddered as his makeshift black leathers shimmered and turned into faded, black, pants, shirt, eye-patch, and cloth head covering. It was in response to the Orc's body changing back to a Human's form. "Master J, clever captain, simple too." The dark skinned man began a similar transformation in both clothing and shape. Now a younger Human in a rough spun uniform of Karowyn's Merchant House. Handing several scrolls to the now other human he informed him that since they had all the coded copies of the most recent set of books about Golden, Unyielding, Strength of Osiris and his most recent Elven lover, the courtesan, Rhiana. That they needed to get them to those in the know. "But, Master J, uhh I mean captain," the black robed human had both arms up in pleading relief for his verbal error, "Captain, we made sure that black gloved broker got his copy where are we headed to now?" Knowing the Morphean Fellowship needed help steering certain events to a positive conclusion for non-accepted races meant moving forces to Wisdom. The only man that controlled a silent working of informants in lands that far east was Mangy Carl. Besides the members of CrIsis that probably remember the exact promise they made the underworld leader were gone. The "Golden, Unyielding, Strength of Osiris" was not known for being a fastidious mental fortress. Father Indaris, the Seeker of Isis, was fifty-fifty if he might remember. The bargain they got from Carl was tenuous at best because it would mean if it worked he would get two favors for switching his forces at the last moment. However, it was still the best shot to help the most involved. He told his crew mate that Marmana was their destination to put out more books to interested parties in that kingdom. Next, they would wing south and west back to the Western Empire. Alone he activated the amulet that allowed him to pass through the walls to his cabin. There he took stock in making sure the wards and other deterrents were undisturbed. It was then he took yet another wardrobe and physical shape. Jaymus Murray sat down a desk and removed a black piece of slate marble from his satchel. Whispering words the marble lines began to swirl and soon he was looking upon outline form of Phlixt The Keeper. "Report, Jaymus, on the events leading up to coming election in Wisdom. Then the effects you have witnessed regarding the Books about the Golden One. Lastly, I know you made it in time for the fights in Sulanok. Whom won, and did my bets make headway?"

His vision begins to return as this is seen by Rod Rambler on the morning of the 19th of Gryphon in the 4th Year of King Guy of Timiro. However, he is aware that the scene may have happened even earlier, or later. It was hard to tell.

I love seeing this side storyline continue! This is very well done! What is the Morphean Fellowship angling to ?!?!?

I enjoy reading these snippets which show the larger world at work. Poor Rod Rambler, he’s always getting these random visions – I hope they don’t come at inopportune times.

It seems, on the outset anyway, that this Master J fella is very interested in getting “The Golden One” elected as one of the Guild leaders.

Of course, he may have wagers on it and is trying to cheat the results in his favor.

Of course, my comment was erased- trying again
Anyone else hear Harley Quinn on “Master J”?

Yay! Someone caught it!

Can the Mountain Forget the Sky?