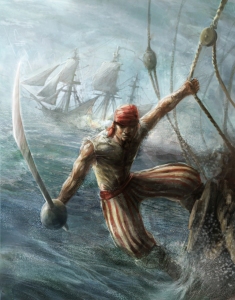 Bexx was taken in the night by some sort of sea creature. A cry of alarm, and a splash. Not the greatest of deaths, but honorable, and a better way to go than some I have witnessed.

Chu has decided to go home, claiming he was called away by his God. It seems odd to me that a God would do that, especially after going through so much trouble to set him upon this path. He doesn’t seem the type to cut and run, however, so what else could it be? For whatever reason, we will make port at New Crests so he can be on his way.

The perverted Harbormaster at New Crests attempted to force his way on the ship at our arrival, apparently to satisfy a wager. This must have been some bet, as he demanded, then threatened — several of us, myself included, felt compelled to do him the honor of drawing our weapons on him — then begged to inspect our vessel with increasing desperation. In the end, he dismissed our harborage fees and paid us 600 gold for his access, although he was not allowed to go near what Chip calls the “Engine Room.”

Why “Engine Room?” A siege engine could never fit in a room so small.

What kind of shipbuilder puts siege engines below decks, anyway?

Perhaps my trust in the Gods has been misplaced.

To the left, I have seen marvelous weapons of curious workmanship on this ship. Perhaps it would be wiser to take a greater interest in the workings of this remarkable vessel rather than beginning to doubt the Gods now. I will discuss the matter with Chip at the earliest convenience. Perhaps I can learn to fire that Lightning Cannon, or maybe even pilot her. Either way, I should at least take a tour of this mysterious “Engine Room.”

At New Crests, we were joined by two more, a man and a child. What business has a child with us? I know only too well what fate has in store for those who go adventuring at too early an age. There had better be more to this Gavin than meets the eyes for our Wolfen could easily make a meal of him in two or three bites, and he seems the timid sort.

I might have known. The man Rell is the one who made the wager which set the filthy Harbormaster upon us. Apparently he wagered several nights of his sexual favors against several days of charity work from the Harbormaster that a ship would arrive made entirely of yellow wood. Fortunately for him, the ship is so made; I am unconvinced he could have survived one night with that man, much less three.

Clearly the Gods told him a great deal about us, else how could he have known about the ship. More to the point, why would he have made such a wager? Does this show faith, or a secret desire to lose? Or both?

Bah. I will keep an eye on him. He will have to prove himself trustworthy, the same as everyone else.

Cracks and shards! I knew piracy was endemic in these seas, but never did I imagine we would encounter so many so often! We were set upon by five pirateers, who demanded our surrender!

The fighting was hot and thirsty work. Some of the pirate ships were armed with catapults, while the others were armed with ballistas. As I was in the crow’s nest, and had reached out to greet them with my bow, they returned the compliment with their siege engines. Isis was with me, and I was able to avoid several ballista bolts which destroyed the crow’s nest.

I am unsure of how the others comported themselves during the battle as I spent much of the fight clinging to the riggings, but I do know that several shots were fired from the Lightening Cannon, and one or both of the new people is a mage of some strength, for a barrier of some kind was erected that protected the ship from the fireballs shot from the enemies’ catapults, and I saw nearly the entire crew of one ship keel over, apparently senseless. Two of the pirate ships gave up and fled, but Greldarr, Chip and someone else (I am unsure who) boarded two of the remaining pirateers, and wound up accepting their surrender.

We spent a long time arguing the fate of our prisoners. Greldarr, of course, wanted to kill them all, or turn them in to the local authorities, which amounts to the same thing, and sell their possessions for charity. Others wanted to strip them of their possessions and abandon them on a deserted isle, or load them all on one ship and set them adrift without any navigation aides. I myself wanted to desert them, and make them watch as their ships burned before their eyes.

The “discussion” began to get rather heated when I noticed Gavin had begun to pray. The last time we dealt with pirates, I had wondered why nobody thought to ask the Gods for guidance. Again I made the mistake of relying on others when I should have done something myself, for clearly prayer was the answer.

We are nominally a religious order. You’d think we’d pray more than we do.

Regardless, Gavin received an answer of his God. We were commanded to make port at Ironshod, and turn our prisoners over to the local authorities. There we found a suitable magistrate, who called upon me for an accounting of our prisoners’ crimes, and asked us to testify at their trial tomorrow.

We found lodgings for the night, and no sooner had we entered the taproom, than the Dwarf and the Wolfen began to fight. It looked as though their stupidity was catching, so I decided to take a walk rather than watch the fight.

This is difficult. I have little interest in being around people anymore, much less drunken brawlers who don’t even have the courtesy to get drunk before they brawl.

I know where he lives now. I could easily leave and pursue my own path, but I have given my word.

To Isis, for all love.

When I returned to the taproom, the others had ceased their brawling and were discussing a book being written by magic pigeons, or some sort of nonsense.

I don’t care. I’m going to bed. We have the trial in the morning.

At the trial, all the pirates were found guilty and sentenced to prison. Not a surprise when the jury found out their accusers were selected by the Gods of Light for a higher purpose. Interestingly enough, it turns out Rell knew these Dragon’s Tooth Pirates. Apparently he’s a Collector, and was sent by the Teamster’s Guild to recover a ring from them. He went below decks when he realized who they were in an effort to avoid getting involved! He eventually came up and joined the fight, but I will keep a sharper eye on this one. His actions served our purpose this time, but if he continually runs away he could become a liability.

I must to bed. We sail on the morrow. Hopefully we will not meet any more pirates for a while.

There’s another one who requires watching.

Posted by Cava on the 5th day of Majestic, in the 340th year of the Dominion.

“Perhaps my trust in the Gods has been misplaced.”

Well, he should rest easy knowing that he is not the only one.

What Rell Did A rough beginning to the journey

Pirates? What the.... Here we go again