Must We Tread the Same Ground as Magic? 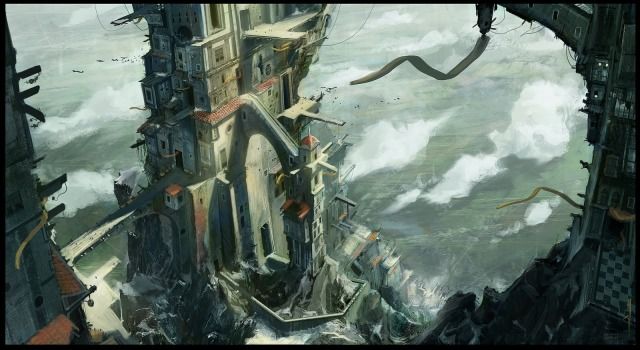 This is a reply from your friend Silent Dream. I was surprised to receive a letter from you! It was good to hear from you. Your words were comforting and true. They were something I didn’t know I needed to hear until I heard them. As always, your advice is wise.

I hope you are able to get into Renvin and see what is happening. I know we used to wonder why they closed their doors. We thought it was because of the war. But the rumor you said makes it seem like there was another reason. This is exciting! I almost wish I could be with you. But I am very much needed here, with CrIsis.

Here are some of the things which have happened since I last wrote you.

I became a member of the Tri-Arcanum Guild. Their symbol has magically attached itself to my pack. I did this to support Xerx’ses as he became the new leader of the Weavers. I have told you before how I wished the Humans of the Eastern Territories and we of the Wolfen Empire could see each other peacefully. Well what better way to take a step in that direction than to become a member of their guild?

This was not a decision I came to lightly. It has been tough. Many of the people I try to talk with here refuse to acknowledge me. I have been called many derogatory things. This does not bother me. But it makes me sad. I am thankful to great Apis that there are just as many people here who will talk to me. Some even accept me. It gives me hope that this peace between our nations can last.

Last night I sat at a table for dinner with the rest of CrIsis and King Hafton. I was very nervous about being there. I did not want to be there but I stayed anyway. I ate my meal. I did my best to avoid saying anything. I did not want to say the wrong thing. Thankfully he was distracted by the news that the Wolven were created by Humans and Elves. Also that Humans may be a race as ancient as the Elves and Dwarves. He asked for proof and was promised copies of the books which CrIsis found that asserted these claims. As soon as I was able to leave I did so. I even left politely. I think it went well. Peace is hard.

We are of course still in Wisdom while Xerx’ses acclimates to his new station. Once acclimated he will make preparations to leave so that we may all return to our quest. I have begun to explore the guild. Grignak was kind enough to accompany me as I purchased magical trinkets which seemed useful. I met an Alchemist here named Thurweard Getor. His prices and his selection were especially amazing. I don’t know anyone who would come here to the guild in order to shop for magic but if I did I would recommend they see him.

What I found most interesting about my interaction with the Alchemist Getor were the beliefs he held about the Wolven Empire. Such negative things! “Is this how my country is perceived?” That is what I thought as he told me about how terribly the Wolfen treat Humans in their lands. I told him about Havea but that did not change his mind. His comments did make me think about you. But I know that was different in ways I could not discuss with him. We talked very cordially but he stayed firm in his misconceptions.

The psychics of this guild call themselves Internalists. That makes me an Internalist. I was very excited to learn about their wonders. I found that all the guild branches have expansive libraries. Taken all together the guild has the third largest in the world. Only the libraries at Sekti-Abtu and Bletherad are larger. At least that is what I was told today. I did not get to see those other libraries while I was in those places. CrIsis was in and out so fast. I will have time here, I think. I will try to at least explore this library while I am here.

It is in confidence that I will confess this next part, Moli. I am so far very disappointed in this guild. I know I have only begun to learn about it. But I was let down by what I could discover. They seem focused on trying to mimic the wonders of magic. Is that the path we are limited to? Is there nothing new to discover? No new abilities crafted from the imagination? No advances in meditation? They even rely on magic and Alchemists to aid in the teaching of new abilities. Maybe I am missing the wonder. The Emirin did not need magic to guide me in learning my abilities. They encouraged me to break past the limits of convention and seek the answers within. This guild does not seem to do that. Not that I have seen yet.

I admit it has only been one day. I am also new. And almost one-third of the people I try to talk with reject me angrily. Others are more tolerant. For example I met a fellow guild member today who offered to teach me how to turn water into wine. I know this is magic which exists. I have seen Father Indaris do it several times now. Though the wine he makes barely affects Ursus I know The Nameless Man seems to enjoy what is produced. Despite that I declined the offer for now. If emulating magic is the path to follow then I will seek other abilities. Not parlor tricks.

The last thing I have to tell you is the most amazing. Last night I was visited by Great Apis! She was kind and warm. But stern. “My gifts to the Church are sorely lacking. I must be more generous to those that have given me so much.” That is what she said to me before she disappeared. I admit I was confused and disappointed all over again. Once more I was unable to talk with the Goddess about my place among CrIsis. But a talk with Father Indaris set me straight.

Tonight is the blood moon. I will join CrIsis in a ceremony to Khonsu. Both Ursus and The Nameless Man are leading this ceremony to their God. I do not know what the night will bring. You taught me a lot about religion but I couldn’t recall anything about ceremonies to Khonsu. I think it will be interesting.

May the Gods always stand between you and harm in all the empty places you walk.

Note: This letter written in Elven, on parchment paper, on the 23rd day of Grekar, in the seventy-second year of the Great Wolfen Empire.

I like seeing him being just a little more open-minded, especially when it comes to Ursus & No Name and how they worship. We are sometimes just as surprised by what happens.

Dream believes in all the gods – his preference is just for Apis.

This is a fantastic log, your best yet. Really reveals much about Dream, and the way he thinks! Moli would be proud, if she yet lives…

I have to admit it I have wanted to say it for a long time, the guild feels like any other town. There is a higher percentage of dying in a magical fashion, but beyond that it feels, ( I am sorry I know this will hurt ) cliché. I feel the logistics of time don’t allow us to actually see the wonders here in having all three branches of the mystical world at ones disposal.

Well I for one am done sightseeing in the guild – 5 days won’t be enough time to learn new psionics cheaply, and if I spend too much more money to learn things quickly it will hurt our travel plans. I think 5 days of library research are my plan of attack once we return. Besides… what could the guild possibly have to teach?

I think you might be able to help Thoth out as like some kind of sub god of wisdom.

Memoirs of a Cat

Do You Find The Speech Worthy