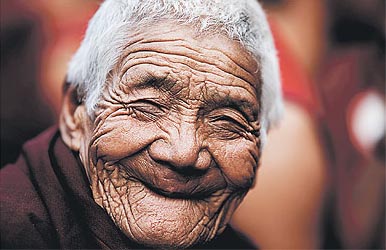 Being a member of this group is by far the most magnificent experience that anyone could hope for. One reason, for instance, would be the constant hand of the gods on their wheel, allowing for glimpses into the infinitely mysterious.

While assaulting the Dungeon of Wo-Elfenbrut, I happened to take a sizeable deathwave in the chest. It was quite the experience… dying, that is. As the world faded from view, cold seeping into my hands and feet, I saw an emaciated boy dragging a giant scythe behind him. Though the room and my traveling companions quickly faded into nothingness, this boy stayed clearly visible to my eyes, and in fact, became clearer and brighter. He increased in brightness until he and I were hanging in blackness complete.

We sat there for a while, the boy and I. He stared at me, and I could feel my soul shifting, as if unseen 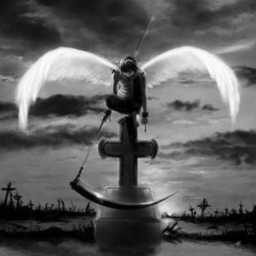 balances were playing back and forth with my eternal reward.

“You are a strange one, you know. You proclaim the righteousness, which is the bread of priests, yet you swindle and con your way into the pits of lust and lasciviousness.” We had sat for so long that his quiet, voice rang like a clarion against me. I could feel its vibrations through me, like ripples in a pond. After the first salvo of a statement, I recovered enough to wonder upon the clarity of his voice. Almost like a single pebble being thrown into an underground lake, whose cavernous reaches were made of crystal tuned to each other, to resound perfection to the bystander.

’’But it is all meaningless! In fact, doesn’t Bast herself sidle her luscious way into the Pits of Lust herself?!? How can such an act be evil, if it is a sign of a divine?” I asked him, finding my voice at last.

“She leads those willing to follow her, and communes with the like of heart. She does not con. She does not swindle. You do both, every time you are anonymous enough to escape ill repute. You have left children, stolen savings, and – worst of all – have turned believers’ backs against their gods. In any pantheon, that would be worth torment alone. But, to balance the scales, you proclaim the Archons of Ra, bolstering faith where’er you go.”

“I have never knowingly left children behind, and if the women I laid with were to come with child, it is not my responsibility to care for them! Such is the understanding of any woman that frequents the common rooms of inns, searching for companionship. Especially those that capture the Bard! They have no grounding for any claim to support. If people don’t have money to lose, they shouldn’t bet! It is not my fault either! I have fought for Thoth, proclaiming truth and defeating ignorance ‘WHERE’ER I went.” I felt that my time in the unliving was going to be terrible… as I was arguing childishly with Death’s Scythe himself… but he should have known I deserve to go to paradise!!!!

Either way, when I unleashed my poorly planned assault, a look of impish glee passed over his face, like a distant tower seen in the momentary parting of clouds. I felt my soul being slowly lowered downward, as if the scales had finally decided, when a brilliant shaft of light pierced the darkness between Utu and I. On the floor between us… or what would have passed for a floor if we were standing on one, and not hanging weightless in the Abyss… was a hole, as if cut into the ceiling of the room below me, where No Name and Xerx’ses were working over my lifeless body, which had already started to shrivel.

I heard a growing roar, as if the Crystal Lake’s underground cavern were suddenly tipped on its side. It deafened me, and I looked at Utu – its source. His boyish face was twisted and stretched, and he was screaming his outrage at the sight. His jaw had distended, and great tusks had grown from his canines, and what he was becoming wasn’t at all the emaciated boy he’d been before. He grew a muzzle, and his eyes turned to violet crystals burning with an inner light. ‘NO! YOU ARE MINE! I will have my revenge on this Nameless Interloper! YOU WILL…”

I leapt through the hole, not wanting to be in any dimension where the resident God is on a rampage. I landed on the tiles next to my head, and walked over to my waist. As Xerx’ses laid his hands on me, I laid my soul back into my body, like a corpse in a cozy little coffin. I opened my body’s eyes and barely held back, “Heya beautiful, if you’re going to touch me like that I need some dinner first!”

And thus was my brief but telling conversation with Utu, Death’s Scythe, the Disperser of Souls.

Until I write again,
Rooster.

This was a great story- loved the interaction.

It was an enjoyable read.

I’m now imagining that he leaves a pregnant woman in every town he travels through. To follow Rooster one must only follow the trail of fatherless kids. Out of all the possible misdeeds in life, if that’s the thing which the god of death focuses on then you gotta know you’ve overdone it just a tad…

Of greater import was seeing the PoV of Utu being pissed off by the resurrection. The god of death is angry with CrIsis, a group which kills enemies constantly. I am worried that death may begin to come harder for our foes.