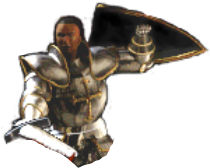 To Sir Quixis Ote
Noble Knight Commander of the Dawn,

~ The 8th of THOTH / Day Seven of the Competitions ~

It is my hope that this missive reaches you here in Lopania because you will still be at the ‘Games’ with your noble retinue of Knights. Tonight after we unmasked the Agent of the Dark, Zizean, leader of ReSet. As the one that tricked Brother Indaris into cheating impersonating Lady Isis herself. We were waylaid by five Raksasha Demons, three Baal-Rog Demons (one of whom I smote with Holy Lightning!!!!), three Gallu Demons, and three Alu Demons! A riot was also in progress between CrIsis supporters and the Elves of Sulestan.

We vanquished the demon horde and stopped the riot with ‘Clouds of Slumber & Spider Web Spells’ and then set to task raising the dead, only two of the five Lopanic / Llornian Knights were unable to be resurrected. Of the Elves and other rioters all that lost their lives were resurrected whether they be friend or foe. Because that was the right and good action as suggested by Master-Sister Caminata and seconded by myself.

Sir Thurgood, has had the veil lifted and the same dark forces affecting the Duke in Llorn we feel are at work among the Elves of the that land. Despite our success use caution and work with the good knight of the LGC to ferret out the Demonic forces that may still be in the city and poisoning a Nation of good people.

Stamp out the demonkind’s cloven hoof!

P.S. Although I am no priest may the Lawgiver’s judgement keep you and yours safe. If I said your title wrong I am sorry.

P.P.S How is Sir Palomedes doing on that ankle? Please pass along the well wishes from CrIsis and I to him.

>>> Written by Xerx’ses,
later upon the of the 8th of Thoth, 70th Year of the Wolfen Empire, 2nd year of King Guy the First of the Timiro Kingdom, and 343 year of the Dominion of Man. <<<

Did you see that thing I did about giving Thurgood allies that hunt evil to deal with the Duke’s evil girlfriend, LOL!!!!!!!!

Too bad the Knights of Dawn are the rivals of the better trained and better equipped Mistoan Knights of Llorn- would be suicide for them.

“…and a Partridge-demon in a pear tree”; you missed one Xerx’es.

The Conundrum of Righteous Summoners

CrIsis Has Need Of You And Thine Noble Band

A Prayer To Isis

A Question of Faith