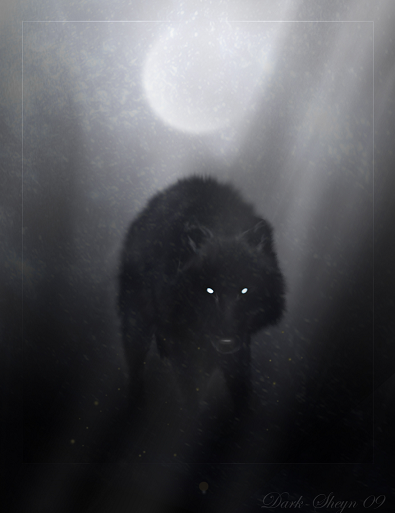 The rain continued to pour down as the royals looked through the crack in the barn. The mysterious man lowered his scythe and the Wolfen snarled ferociously at him. It charged and the man without fear rushed to meet the beast. The mud beneath them splashed with each step. The Wolfen leapt into the air at him and he slid on the ground raising his scythe enough to make contact on the torso of the beast. He used it as a fulcrum allowing his inertia to launch himself over the beast and back to his starting point. His feet planted firmly as he released his scythe from the victim. He stood there facing us. The Wolfen remained standing as well. It’s forearms walked forward while the hind remained still. All that connected both parts was its spine. He let out a roar and the man turned around surprised his foe remained standing. It charged at him whipping its hind around as a club launching the man out of sight.

“Let’s get out of here,” called out Edgar. He was already working on preparing the horses. “Shouldn’t we help him?” Maya asked. Edgar walked over producing a knife menacingly towards Maya’s throat. “If you want to die, be my guest. But if you put us at risk I won’t hesitate in feeding you to them too.” Maya sat there feeling the weight of the gazes of the nobles as they laid upon her. She quietly nodded in defeat. The nobles mounted their horses while Edgar prepared to lead the escape. While he reached down to pull the barn door open, Maya caught a brief glimpse of the book that was read earlier that night in his saddle bag. The doors flew open and Edgar rushed out. This caught the creatures on the other side off guard as he, Anjuli, and the remaining twin pushed their way forward. The Wolfen regained there composure enough to grab onto Maya’s horse and sink their claws and teeth into its warm blood that was now exiting its neck. Maya was tossed off the horse in the mayhem and rapidly tried to crawl back the way they had come. Maybe that Wolfen would finish her quicker than this horse. She reached the door and pushed with all the might she could muster. It cracked open and she slid through at the first chance. There was no one in sight. Then from the shadows white fangs could be seen fast approaching. The rain and the darkness hid the figure until that moment. The head bounced on the ground and landed at her feet. With rapid reflexes she punted the hound’s head away only about a few feet. The man in the trench coat emerged from the darkness making haste towards the barn. As if reading his mind, Maya pointed off towards the opposite door, “They went that way. They swarmed me and….” The man grabs her by the arm and continues trotting towards that direction. With this man, Maya actually felt safe for the first time that night.

Edgar lead way to the main courtyard. He cantered his horse as best he could. Anjuli and the twin were right behind him. Only a short while before they would be rid of this place. Lightning struck. The courtyard lit up and showed to be as crowded as the capital city in a major festival. Still, they made haste. They could feel bodies bumping off of the momentum of the horses. After a short while groans and moans could be heard louder than the downpour and that’s when something grabbed Anjuli’s foot and dismounted her. Her back made a loud thump as it met the cobblestone courtyard. She bounced. It was at this time she saw the glint of steel sticking out of the creatures chest. It looked at her and almost gave a toothy grin as its new compatriots began to tear into her flesh. Nails peeled skin away to reveal the tasty blood and muscle that was once so fair. These creatures have never had a delicacy like this before and it showed. The one with the steel stood there and walked off with the leg as its trophy, not to devour, but to cherish.

Edward and the twin continued to dash forward. They were almost to the road out of the place when they too were dismounted by the beasts that tore into their mount’s flesh. The neighs and whinnies of pain could be heard as well as the simultaneous crunching of bones. Edgar got up and continued on foot hobbling from the fall. At this point he heard a thump and something grabbed his leg. He turned around to see that it was the twin who was being pulled into the hoard caught by the horse’s reins. The creatures took notice and came towards them. “Help me!” she cried out. “No let go you wench!” he exclaimed back. Her grasp tightened at this. Edgar reached into his bag and produced the cleaver he had. He swung at her arm and hit bone. Her scream could be heard for miles. The angle was not good for him to make a clean cut so he swung at the other side of her arm and hit the bone again. Her flesh dangled down like torn leather. The blood mixed with the mud. Now all that remained was the bone. With his free leg, he stomped on her arm and snapped it. He was free. He turned back to his destination and continued hobbling forward. He chuckled quietly to himself. He made it. Then a fist with a black leather glove came flying into his face. He was knocked to the ground. Before him stood the man in the trench coat and at his side was Maya. “Give me the book,” demanded the man in a stern voice. Edgar tried to get up but the man’s boot met his chest and held him down. “The book!” yelled the man. Edgar could hear the creatures behind him notice the yell and start coming forward. He reached into his bag and tossed the tome to the man. “What do you want to do with him?” asked the man to Maya. “Leave him,” she said quietly. They turned and began walking down the road. Shink. Edgar stabbed a dagger deep into the back of the man’s shoulder. Edgar smiled as he looked at them with treachery. Only to see a dagger land squarely between his eyes. Maya let go of the hilt and jumped back in shock of what she just did. The body hit the floor. The man slumped down to a knee in the mud. “Go on, I’ll make sure you are safe.” Maya tried to help the man, but he pushed her away and pointed at the road. She turned and started walking. The man gathered his strength and greeted the oncoming masses with his scythe. Maya lost sight of him after a bit. She pressed on.

“And that was the whole story, I swear.” exclaimed Maya to the two constables interrogating her in a dark town barracks. “Those things could be out there still. You need to raise alert,” she continued. They looked at her and laughed. They talked amongst themselves. It was clear they did not believe her story. “Tell it to the lord in the morning,” said the taller guard. “Put her back in the cell,” he continued. “The lord doesn’t take kindly to your types around here.” The other guard grabbed Maya and tossed her into a damp cell with human waste scattered on the floor from its previous tenants. She sat there and sobbed. The moonlight did not bring any reprieve like it used to. Sleep came slowly, but as soon as it came she was awakened by the groaning of the window bars. They were separated and a hand with a black leather glove was reaching through. “Need a lift?”

Tale of the The Forest from A Survivor.

This could be a movie!!!

WOW, just a great job of keeping the suspense.

I agree with AZ, this would be a great movie.

It would make a great book also, reading flashbacks or side stories to better describe the characters involved. Just to get a sense of why they act the way they did.