The Grassy Plains of Ma'ip

Ra is disappointed to appoint Silent Dream to CrIsis.

This is a letter from your friend Silent Dream. Something incredible has happened! I want you to know that. First I must tell you I am safe. I disappeared earlier today in front of you. The light took me away to Ma’ip. The realm of the Gods!

I was dropped into a great plain. The grass was taller than I am. All the smells and sights! I have trouble describing them. How amazing, how much more they were. A great clomping sound shook the plain. A large bird-like foot parted the grass. Then Great Ra was revealed before me. He was easily twenty feet tall. 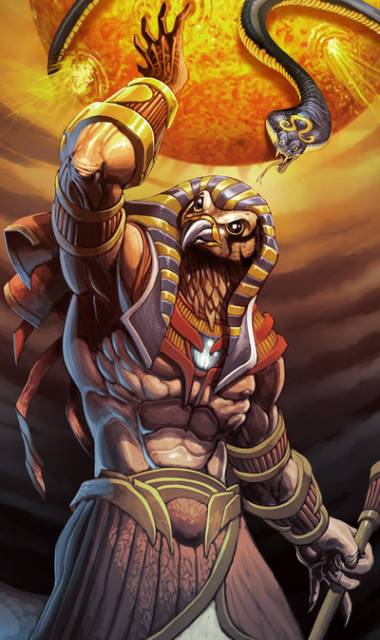 He called me by my secret name. He spoke to me in the language of my people. He was not happy with me. I didn’t know why. I showed respect to him, as was proper. He decided my respect was weakness. He gave me a look that nearly caused me to flee. I became determined to prove myself. I stood my ground.

The goddess Apis was wrong about me. That was what Ra said to me. Apis wanted me to join with CrIsis. He did not think I was what they needed. Was Great Ra testing me? These are things he said to me:

CrIsis has gathered attention from many other beings. Not just those of the Dark. Dark gods. Evil gods. Many other beings who don’t like the power CrIsis has reached. Their journey is no longer just about rebuilding Osiris. Their power is garnering attention. There will be very trying times ahead. The gods and their minions shall attack CrIsis directly. This will happen very soon. CrIsis needs a fighter, not….

Not me. That is what he said to me. He said again that Apis was wrong. But my goddess had chosen me. I knew I must have faith in her judgement. I knew I must prove worthy. Ra asked if I was a fighter. This is what I told him:

This is what I thought: My Goddess believes I can do this. I must not shy from this duty.

Ra said I must forewarn CrIsis. Ra said I shall very soon prove my words. Out of nowhere he dropped 16 books and many scrolls. He instructed me to read them. When done I was to say Great Ra, I have done reading. He left me. Everything around me went silent. There was no wind. There were no longer bird sounds. No rustling of the grass. It was as if all time had stopped.

I read all 16 Books. I read the additional 44 scrolls. This chronicle of their deeds was different. These books are the true record. The published books you remember are different. Sometimes little details change. Occasionally major details change. The general story is still true.

Great Ra, I have done reading. I said that out loud as instructed. Everything began moving again. I heard the strides of Ra again. This time when he arrived he was only six feet tall. Still magnificent. He instructed me to go to them. Suddenly I was standing in the Baalgor Wastelands. I was outside a cave. This must be the last place I read about. Where CrIsis sought refuge and recovery from a recent battle. I walked in and met them walking out.

Moli, their books do them no justice. Not even the true books. I was humbled to meet Indaris, Xerx’ses, Grignak, Ursus, and The Man with No Name. I delivered Ra’s message. I realized I now wear an Eternal Torch Ring. I have joined them in their quest.

Note: This letter written in Elven, on pages ripped out of a book, on the twelfth day of Gryphon, in the seventy-second year of the Great Wolfen Empire.

Xerx’ses read these words and thinks to himself, ‘Great and Terrible Ra, maker of all we know I ask thee one humble question.’

Ra definitely had someone else in mind….
Great intro log!

I wonder if Ra had a specific person in mind, or if it was more like he literally wanted anyone except Silent Dream?

You make the character sound a little humble, yet quietly confident. A God says you are not worthy, you bow but stand your ground. Wonderful God meet tale.

Hale and Well Met The Return of Terramore Gleba