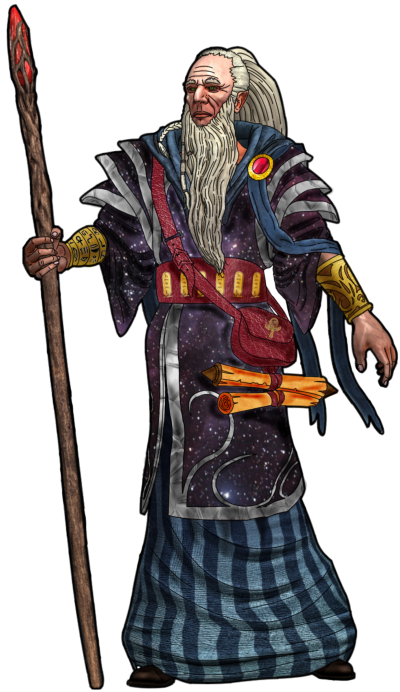 As told to Chip at sunrise on March 5th, PA 109. Later translated by Rod Rambler

So the group of us, we did ok… we grew together, had many adventures, all in the name of Isis. We even rescued one of Osiris’ body parts, and they built a temple to house it!! Then we defeated an army of sorcerers, and recovered the Palladium of Destiny for the people. Then the trouble started. We started to believe our own rumors, our own legend. We stopped fighting for Isis, and started fighting for our own glory. Ashamed, we chose to leave our land, leave our beloved Palladium, and leave each other. Each of us chose to go alone, other than the 3 married couples in our group. So we set out to 11 different planes, and I ended here, on Maga Island, on Rifts Earth. That was 100 years ago, March 5th. That day is today. I left Palladium 300 years ago…on that same day.

Isis appeared to me last night in a dream. " O thou of countless names, " I asked, " How may I serve you?" This is a hint, my young believer…. she likes to have you start that way… It helps….
She told me that she needed me back home, for a tough mission, and she was going to ask my closest friend, the official leader of the Defilers, the wizard Xar Xar, to join me. I told her that I would be glad to, but I was of advanced age (although for 1200 years old I think I am doing ok) I said that there was a young believer and his companion that would serve well. I gave her your name.

She will call on you soon, probably on the anniversary. She likes symmetry and symbolism. You will go to Palladium…. why, I do not know. Use my name if needed to open doors. I am known as Elanu the star lord, there. On the morn of morrow you will find a ring outside your door. Wake with the sun, and bless Isis as you pick it up. It will shine from within upon the blessing once worn, and the gem will glow with a picture of me beside my beloved goddess. Show the blessed ring to anyone who doubts that I have sent you, with the blessings of Isis, back to my home. Beware, however, the Defilers are still known among the evil and selfish, and many will oppose you, and want to tear ( OR BITE) the ring off your finger.

I still have power, although I am aged. I can help you at your direst need, but only once in our lifetimes…. You must touch the ring whilst you wear it, and call my true name- Cornelius Lipschitz (now you know why I went by Elanu). I will appear by your side in a blink (your next attack). This again will only happen once, as the link between our two homes is tentative and unpredictable.

Seek out these places when the goddess allows- my name still carries weight there, I believe and hope.

Glade (a secret place in the Eastern Territory, with a Millennium Tree such as we have on Rifts Earth. Seek out good folk in Yggdrasil, north of Hadrian’s Cove.
Haven- Where the Heart of Osiris is held, Husband of my beloved goddess Isis.
Wisdom- I am, or was, a member of the Tri-Arcanum magic guild,, where I hope my name is still held well.

Inner Cadeth- Seek out Stonelogger, or anyone close to his family.

Mishala- A young… well he was young.. elf named Mikala. Also, Sulyott the All-Knowing … make sure you show him my image.
Terrellia- Sir Derrick

Enry Island- Bishop Tutu, or any of his friends

Vequerrel- Gabriel the Fletcher, Bellowan or anyone taught by him at the Church of Light & Dark, Sallowan Willowwatcher (woodland friend… not liked by city folk)

8} Somewhere
The Slayer of Mountains…. I know not where he is, but if he is gone, a true light has died in the Megaverse.

There are also many temples devoted to thou of countless names, as well as the Church of Light and Dark, where you should find welcome and shelter. Be generous there…. always give, and you shall receive.

Be strong and true in your belief.Never Stray!! I have seen what happens to those who lose their way, and it is not good. Praise Isis, be strong, vigilant, and generous!

Help the lost soul Bexx on his journey. Help him see the true light, and help him believe. He is a good soul that needs saving, and without his belief you will not succeed… Push him, prod him, coax him…. whatever it takes, but turn him to the true path.

I may appear again before you go….. I may not….

I began believing many, many years ago… she protected and nourished me, helped me through dark times and light…. There is much evil in the world, be a beacon of light.
Bless you, and may the blessings of Isis be upon you.

Ah, in my aged mind I forgot 3 men of note. One resides at the Great Library of Bletherad, Malkin Falimede. Another is a wandering bard who may be found anywhere, Jase Wendryn. Lastly, there is a mage in the Northern Wilderness named Firsar.

This is really handy and sometimes reminder helps.

Ok, we need to do alot more research. Iknow Raulph doesn’t seem the research type, but he does have skills that could help. To bad we can’t go back to the Wolfen Empire, unless we are very creative.

His death and our allegiance/formal ties to a kingdom at war with no one has opened that path for us once more.

There’s a fair number of people on this list that CrIsis doesn’t seem to have met yet! The Dragon Blood Descendant, Stonelogger, Sir Derrick, The Arch-Mage, Gabriel the Fletcher, Bellowan, and Mother Ashassa.

The Goddess & A New World Trip to Palladium

Rifts Earth Before the Move to Palladium