Better Than Two in a Bush

CrIsis solemnly stated each name of Isis with the pontiff U’Selekma as they slowly climbed the stairs of the Great Pyramid. It seemed that not only had all of Sekti-Abtu gathered below to watch, but all of Lopan! No wonder, as CrIsis once had 3 Gods from 3 separate pantheons join them at a Pyramid, and now all that could come watched to see what would occur this time. 100 stairs, and 100 names later, CrIsis had arrived at the top of the Pyramid. They turned to wave at the crowd, along with the Pontiff, and then went inside, disappearing from view, entering a set of golden gates.

Four elderly priestesses await inside, with a large wading pool outstretched in front of CrIsis. Each member, having been through the process, strip naked to cleanse themselves in the holy water, emerging on the other side to receive a robe. They then each pass through the glowing arch, entering the holy sands of the desert of Ma’ip. They then climb the 100 steps of the true Pyramid.

Awaiting them at the top they find a Seraph, a Sphinx, a Ramen, and a Phoenixi, all greeting them by true name. The Ramen is recognized as Thabu by both Tyvernos and Overkill; the former advisor to Bishop Rose. Before placing the piece upon its altar they all say a prayer to Osiris, solemnly, each adding their own devotion and resolve to continue in their quest. Asher, being the holder of the piece, approaches the altar. He tentatively places the Right Hand of Osiris down, and it is immediately engulfed in blue fire, rising above the altar. Asher instinctively removes his hands, but not before he hears a distinct “Thank You” in his head, a powerful male voice he identifies as Osiris himself. 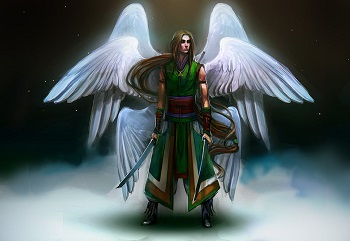 The Seraph looks at each member of CrIsis before he speaks. ‘’The Pieces of Osiris now protected and accessible by the Great Lady now numbers four here on Palladium. One is of his head, two of his torso, and one of his arms. The legs still have no representation. You have risked your lives in His Name, and for that you have our’’ and he motions around his companions, ‘’eternal thanks. Gathered here are one of each of those that commonly worship and revere the Gods of Light. Knowledge we have, but are subjected to the terms of the Agreement. Direct questions of our own subjective knowledge however, we can answer. How can we help you further your quest?’’

Asher speaks, ‘’Having gone back through the logs of CrIsis and having conversed with my companions, it seems that every piece did not at first grant health to the bearers of the pieces of the Lawgiver. In fact, it was not until the Ribs were put into safe keeping that the other pieces gained in power, almost as if the god himself were gaining in power. Ar any of you aware of the effect that any of these pieces have upon the others that we still carry?’’

Thabu answers, “This is a matter of debate, not only among those of the Church, but here amongst us all. As a historian of Osiris myself, I know only this- the single time that at least 3 parts were gathered, reported visions of the Great One increased tenfold. I feel that the God gains in power with each secured piece, but that is only my belief. Did you hear his voice or see him when you placed the Hand upon the Altar?”

Asher replies, “I did not see him, but I did hear him distinctly say ’Thank you. ’ While not quite the answer I had hoped for, this does give me a lot to think about.”

Thabu grins, seeming to rise even taller than his 11 feet, and says, “The Gods are beyond our understanding and comprehension, right Kresnik?” The Phoenixi shrugs, seeming to find something in the distance of interest. Thabu chuckles, “Asher, you have made me a happy Ramen. Only CrIsis have heard Osiris’ voice in a very long time, and the fact that it was a distinctive answer to a piece is truly remarkable! I hope that you all,” and his gaze fixes on Xerx’ses, “put him together soon. Perhaps if he had a leg to stand on he would be able to move around more.”

All four of the protectors bow in unison in front of Asher. The Sphinx speaks, “Asher, you have not only brought the Hand of the Great One, along with CrIsis, but you made a most generous donation to the Light of Ra. Your generosity is commended.”

Indaris turns to the Pontiff and says, “Lord U’Selekma, I have posed this question to a friend in the south, and I thought I should put forth the question here as well. As priests of the Church of Light and Dark, does that mean if one of the Gods of Dark came to you and ordered you to do something, aren’t they bound to obey the Dark gods just as much the gods of Light? It does make it hard to know who to trust in the difficult situations, and this alone makes it hard for me to know when to trust the orders of a priest of Light and Dark.”

‘’Father Philip has trained you well, I see- that is good!’’ U’Selekma continues with a slight grin. “The first question is true, in normal times, but these are not normal times. Each Priest will receive the Agreement, as it is signed by their God or Goddess. There will be no unity between the two sides except here, in the Holy City of Sekti-Abtu. All those of Light must be true to the Light, or be forever forsaken, as is true of the Dark priests as well. Here all is of unity, but even here, while a priest of Dark may not attack you, cooperation should not be expected. It would be true of ReSet should they journey here as well. The line in the sand has become stone, and it cannot be unmade.”

“As far as your point of Set deciding to come, that may be true. It would be a grave risk, and one I would not expect of Set himself, but may happen with Anubis or Bes. However, as a combined unit you may have the power to slay them in their weakened state, so I feel it unlikely- but possible, yes, possible.”

Xerx’ses bows and asks if the would rather have the Leg now and he holds it outstretched as he did for Isis. “This is my lord, my savior, not my possession.”

U’Selekma, Pontiff of the Church of Light and Dark, Holder of the Sacred Ankh, possessor of the Greyhound Head Staff of Ra, and wielder of the Sun Disk.

Another one bit the dust?

By Any Other Name