Ferrel is of an average height, but definitely not average weight, for an elf. He looks more like a human with how much weight he carries on his frame. Which is to say that his weight is much more in line with human sensibilities. His hair is glossy black, so black in fact that it seems to have dark blue highlights.

He wears loose tops that show off skin, and really tight pants. He is gorgeous and he knows it. It’s not that he thinks he is the gods’ gift to women, it’s that he knows he is, and most women agree. This isn’t to say that he’s arrogant, just that he’s experienced a certain amount of success in the past, and expects it to continue into the future.

He always has a flask of peach brandy on him, not for the alcohol, but for the other drugs he mixes into it.

As a song mage, he always has a musical instrument at hand. His favorite is a Lyre, but he knows how to play both the lute and pan pipes as well. He also has a beautiful singing voice, something he uses to pursue his favorite pastime, as mentioned before.

He loves life, and often life loves him right back.

Ferrel Fesqueue is a boy to give his mother a condition, although only a boy in the Elven sense. At forty-three, only an elf would consider Ferrel still a boy.

At the ripe old age of ten, Ferrel apprenticed himself to a human Song Mage and ran away from home. Even at the time Ferrel had an avid curiosity, and deft fingers, and had thought to use the human to get to another city where he could find entrance into the thieves guild. What Ferrel didn’t know was that he also had a talent for music, and a love for the same.

Before they’d made it anywhere important Ferrel was hooked on his new profession, and spending every waking moment working on his voice to improve it’s quality.

By the time he reached the age of twenty, his master had had enough of the rash boy and left him in a city in the Western Empire to try and alleviate himself of the individual.

This is where Ferrel delved first into the drug culture and found himself a place among them. His drug of choice is Rashad but usually takes it well diluted with peach brandy.

It allows him to see the world in a much more vivid way without the severe debilitating effects of the hallucinations normal to Rashad use.

Ferrel was born under the sign of Selestra the Mermaid. Patron of sirens and song mages, those that are born under this sign are often playful and curious.

The morning sun coming up over the beach burned my eyes and bored into my soul. Three days with no Rashad, and already I was feeling it. Everything, except for the sun, was dull and flat. The light from the sun just hurt. Not like a headache, but more just prevented me from seeing anything at all clearly. I much preferred trying to find my way by moonlight. It had been luck that sent me from the bowsprint where I’d been playing Cherlindria into the water. Luckily for me Cherlindria is enchanted. I dragged myself from the surf and onto the beach. My addled mind was not up to the task of heading back into the waves to find people, and my weakened state didn’t allow me to use my magic.

Three days later and I still mourned my own stupidity. The hulk was where it had grounded on the reef surrounding the island. There it was, only three hundred feet from the shore where I now sat, but that three hundred feet seemed an insurmountable gulf. Bodies littered the bay between me and the boat, and I hoped beyond hope that someone was still alive clinging to the skeleton of wood and canvas.

In three days I’d seen no one.

The dragon might have had something to do with it, but I hadn’t seen him in a day and a half. He ferried bodies from the moment of the crash until he disappeared.

I sat there the entire day, looking at the crash. A little spring ran past my perch at the edge of the beach, so I had water, but I’d soon have to begin looking for food.

Move Object makes an excellent snare. You simply target the fowl you want to capture, and there it is, ready for the plucking in mid air. Fire is a bit more problematic, as I’ve never needed to start my own in the past. I’ve been living off coconuts so far, but my mouth waters for some meat.

I may just have to swim out to the wreckage tomorrow to retrieve a knife.

There are other dangers beyond the dragon. I saw his bones at the bottom of the lagoon, and assume that whatever killed him killed the crew that tried to get to shore. Why I am alive and they are dead is even more of a mystery to me now. I walked the reef from my little island to the ship. I barely got my boots wet. I wonder if the time of day matters for whatever beast lies in wait down below. I got a knife as well as a flint and steel. I don’t know how to use the flint, so I might have to do some trial and error. After all, I have nothing but time now.

After two days, I finally have a fire going. Two very long days of attempt after attempt. I’m going to do my best to keep this fire burning because I’m not sure I can get it started again should it burn out.

I cooked the unnamed fowl today, and enjoyed it greatly. Tomorrow…

I curse my own stupidity, and my lack of foresight. The leaves I’d been recording my story on were too close to Wendig’s cage. How could I have been so stupid. So little remains of the time I’ve spent here. The breakthroughs I made. The songs I wrote.

The songs are the greatest loss. I had so many songs, songs of beauty that I simply can’t describe and the went down the gullet of that stupid pig.

Some times revenge is better than companionship, and it is a dish best served hot with some plantains and coconut milk.

With Wendig gone, and my home empty of any hope, I set of in search of a way off the island again. Again I see that I am alone on this ocean. In a fit of rage I set my home alight…of course that might have been caused by the hangover I got from the fermented coconut juice as well. The pillar of smoke was a sight to behold and I had to retreat to the beach to avoid contributing myself to the blaze.

A ship! How did I never think of this before. The thick black cloud from my home was obvious signs of life on this forsaken rock. It attracted hyenas of the two legged variety. Their pirate flag was at first worrisome, but the female captain set my heart at ease. Never has there been a woman who I set my sight upon that has ever failed to succumb, eventually, to my charms.

I could tell by her smile that she’ll be striking her colors before we’ve even put the island over the horizon. Now the only question is how do I get out of a pirate crew. 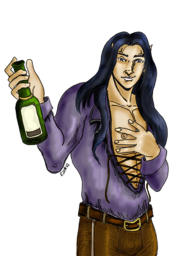