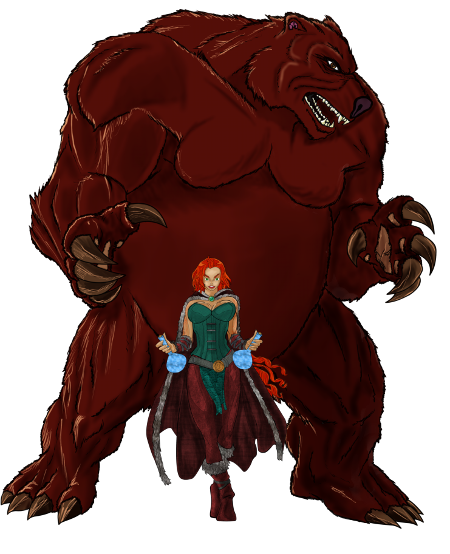 Ansa is a Werebear that currently lives in Avramstown, in the Kingdom of Havea. She is the adopted niece of General Tinor, Supreme Commander of all Havean military forces. Her true name is Arcadia Nita

When in human form she is 6’4" tall and weighs 230 pounds. She has brownish-red hair that flows down to her knees. Her hair is so long and thick that she could could belt it around her waist and it would look like she is wearing a dress, in fact she does this quite often while out and about. Her Uncle Tinor tries to discourage her from doing this as much as possible, as she still doesn’t have the full modesty of her adoptive home. Her arms and legs are quite hirsute, with the color matching her hair. While she is quite hirsute her face is relatively clear with the exception of thick bushy eyebrows that almost go all the way across. She has abundant breasts and wide hips, but she is not considered fat or overweight. In fact, there is very little fat on her body. She is all heavy dense bone and thick banded muscle.

When she is in bear form she is 15’ tall and 2300 pounds. Her fur is also brownish-red, but has a stronger red tint. She looks just like the red bears of the southern Algor mountains. Curiously she maintains her human style breast but two pairs of smaller breast appearing one below the other. She is able to walk and run on just his hind legs, although she prefers all fours.

She is originally from somewhere in the southern range of the Algor Mountains. Exactly where, no one knows and she has never stated. Her birthday is the 2nd of Corg PA33.

Many score years ago during a very familiar “Killer Winter” in Wolfen history, Ansa was forced to come further south down the mountains in search of food. While she could survive long stretches without sustenance, she was at the very limit of her survivability. She made sure to travel and hunt only at night to keep disguised as best she could, finding or making well-hidden shelter every morning. She was resting well one day deep in in a snow drifted cave, when she heard a grand commotion. She quietly crept to the edge of the cave and could see a small army setting up camp all around her hideaway. She slinked back to the very deepest part of the cave intending to try and sneak past the encampment in the darkest part of the night. Thankfully, the army had been traveling most of the day and the sun was to set soon. She sensed it and couldn’t wait. In her human form she was barely able to ward of the sub-freezing temperatures. Several hours passed, and she was almost ready to embark, when there was a large clamor from outside. Shouting, yelling, and clanging of armor, weapons and shields. She couldn’t make out the language all that well, it was a strange dialect. Then there were other NEW voices of a completely foreign language. She only knew that she had to escape as quickly as possible and she bolted at full trot. When she broke through the barrier that had built up around the mouth of the cave it sprayed snow like an avalanche, falling down and putting out several of the camp fires. She kept running taking in very little, but she did notice something strange. There were two forces fighting, a small group of Wolfen surrounded by a very large group of strange looking Humans wearing heavy furs of various animals. The humans seemed to be overcoming the Wolfen, but it was very costly. One very tall, very large, pure black as night Wolfen in particular was very tenacious in his fighting; felling human after human with single blows of his weapons. Upon seeing this, something clicked inside of Ansa and she began to slow. She was well far enough away to keep going and none could catch her, but she stopped and just stared at a tree in her path. She then did something completely counter to every instinct in her body; she turned and raced back at a full gallop. Upon entering the clearing she saw that several humans had gotten the upper hand on the mysterious Wolfen and she shifted her path and headed straight for them. One of the humans saw her too late, and was plowed deeply into the ground under her massive form. She gouged into his chest ripping flesh asunder. She quickly turned and went after the others, slicing at legs as she galloped past many at a time. Once the small group had been taken care off, the large Wolfen howled out a strange call and all his compatriots seemed to rally at that. They re-doubled their efforts and soon, with the help of Ansa, every last human laid dead or dying in the falling snow. Once the survivors had a chance to breath, they all saw Ansa in their presence and turned their weapons towards here. She was about to bolt again, when a loud thundering growl echoed through the clearing. Every one of the Wolfen sheathed their weapons and fell to one knee, facing the source of the blare. She also looked and saw the Massive Wolfen approaching her. She was trembling, preparing to bolt at the first sign of threat. Then she was completely and utterly shocked by him kneeling in front of her and speaking. She was unable to understand him completely, some of the words were familiar, but still strange sounding. “…Heroine…saving…blessed…death…gratitude…” The Wolfen soon realized she didn’t understand, by her canted head. He started speaking a language with different tones and sounds; she just canted her head the opposite direction. He tried a third language and she was able to understand the words but they had a very strange accent. She started to jabber like a teenage girl (which basically she was). He inquired as to why she would return to help and she replied that she didn’t like seeing fellow animals being killed by humans. From that day on the Wolfen leader, none other than the General, was forever in her debt and doted on her like a niece. Because of his rank and status amongst all Haveans and the shear fact that she saved his life, she was fully accepted into the society and looked upon as a walking epic hero. This led her to adopt a new life in the capitol city, even though she was much more at home in the wilderness. She still takes extended breaks from city life to run around in the wilderness remembering her roots, hunting and running free.

General Tinor ensured she was educated properly and trained in special warfare. She is often sent on secretive missions alone. With her skills she is quite adapt and has not failed a single mission that her Uncle has sent her on.

On the 7th of Kym-Nak-Mar PA113, while headed back to her estate room in the Wolfen Minstrel, she literally bumped into Ursus. This chance encounter was filled with sparks and was the catalyst to the two of them starting a relationship. For more on the encounter, relationship and its greater implications see the logs URSUS DID WHAT? and URSUS FALLS IN LOVE.