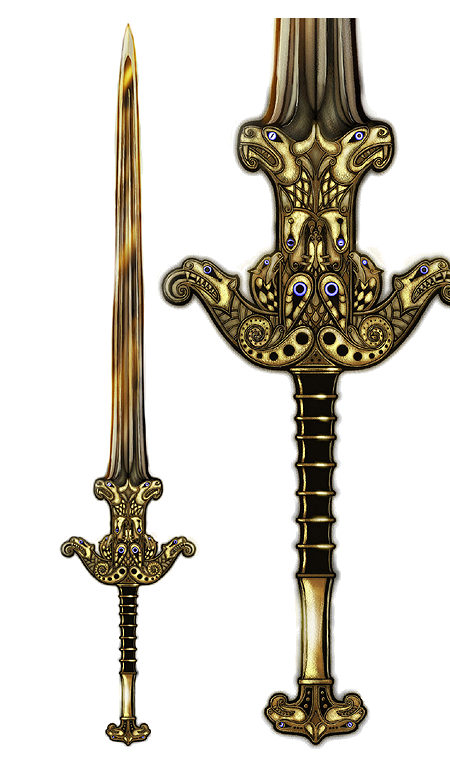 Raulf has this weapon. Quingia Raulf Bozkurtlar received this grand weapon as a reward and gift from the Commanding Legatia (General) that he defended from a rear sneak attack by Eastern Cavalry. This is interesting because the weapon was given to the Legatia by Raulf’s Father. Raulf has had no contact, much less gifts from his Father ever since pledging loyalty and Faith to Ra and the gods of Light. It was a slight insult at the time, but has gone to the wayside with time, as It has been used to slay the enemies of the Empire.

UPDATE: Since Raulf’s display in Haven the story of his grand weapon have resurfaced, the consequences are unknown as of yet. UPDATE Stories of the origin of this weapon have resurfaced. It all begins with the forging of the great and noble Wolfen Empire. Early in its creation, Wolfen were considered vile, awful creatures by all Hoomans. On the contrary they were reviled as honorable creatures by non-hooman, especially Giants and Giant-kind. This is the where the tale of Amara begins. Wolfen, especially the Iron Claw tribe, have been fighting Easterns for some time, trying to keep them from encroaching on their territory. Often that territory included and rightfully belonged to some of the Algor Frost Giants. On a cold mid-Algor day a large raiding party of Eastern Hoomans invaded an Algor village. At first they held their own, but they were severely out number and could not hold out long. They sent pigeons and runners out to all allies begging for assistance. Many messages were received but only one was answered. This year was a Killing Winter year, and few risked leaving the safe confines of hearth & home. The Chieftain of the Iron Claw (Raulf’s Grandfather) summoned every able bodied Wolfen and began the march towards the Algor Village; they Forced March through the night in a massive blizzard. Miraculously they lost less than 10% of the force. Arriving very early, they were able to surprise the Eastern horde, mostly because they didn’t expect any force to come out of the night and a massive blizzard. They, with the help of the Giants were victorious and the village was saved. The Algor Chieftain wanted to reward the band with half of the stores. The Wolfen Chieftain utterly refused, stating that he could never take any ones provisions, especially in such a brutal winter, plus he had full satisfaction that the Easterns were blown a huge defeat and lost many of their force. With that he and his pack left and Force Marched back to their encampment. A few months later during the spring festival, a large assembly of Giants arrived to celebrate with the Wolfen. After the usual customary greetings and fanfare the Algor Chieftain presented the Iron Claw Chieftain with a very special prize. A giant-forged, giant sized claymore lightbringer rune weapon. It was called Amara, the word for friendship in giantese. It was destined to be passed from Chieftain to Chieftain in the Iron Claw tribe. After the Wolfens passing it did go to Bodolf. He broke tradition when it was awarded to one of his commanding Legatias, but it seems that it is fated to stay with the bloodline, when the Legatia gave it to Bodolf’s estranged son Raulf. Is this a portent of the future?

This Holy Rune Claymore, or Lightbringer, has the following qualities:

Giant-sized- Must be at least 8’ tall to wield, even with 2 hands. Only Giants could wield Armara one-handed.
Protection Circle
Remove Curse
Negate Poison
Extra Damage (Does a total of 6D6 damage to any creature- plus damage bonus)