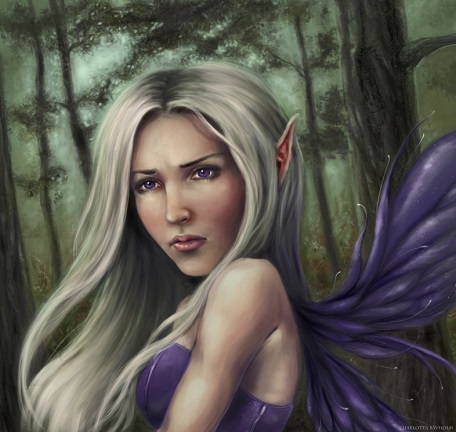 She commonly goes by Lerianashaniel, not Ashianterarielia. Many of her friends and family don’t even know that she has another ‘true name.’ She most commonly goes by Ash to humans, but she occasionally goes by Morning and to one individual she always went by the name Mourning.

It is rare that a human will ever be there for the birth of a fairy, and even more rare that the human will have been lead there by a vision of the future. When an Old Woman walked into the Fairy village at the moment of a birth bearing the symbol of Horus, many of the fairies in the village thought it was auspicious and would mark this fairy for a wondrous future.

When she intoned a prophecy that the Fairy would see the end of her kind, the fairy was abandoned leaving her to the woman alone. The woman picked up the young fairy and took her to another fairy village, calling her Mourning along the way. The woman told her about the future, and what could possibly be the result of her prophecy.