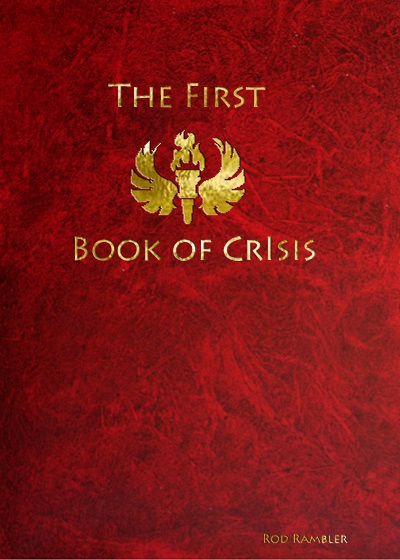 The first six books of CrIsis were written by Rod Rambler, as are all books after 10. Books 7-9 are written by Lady Torchwood.

The title of the first collection is “Introducing CrIsis”. The first release included The Wanderer, The Goddess & A New World, Emerald Ghosts and Wimpy Wolven, Secrets of the Library, and Lost in Tranzlation. It was first released on Thoth 1, 109.

The second collection is much longer. It includes all of the logs from Greldarr’s First Day With Humans to Pirates? What The…?, a span of 17 logs. It’s title is “CrIsis- Heroes?”. It was first released on Corg 21, 109.

The third book runs from the log What Rell Did to Knives, Glorious Knives, a total of 47 logs. At the end of the book there is a false entry, written in Chip’s style, that states erroneously that CrIsis is going south to Dragon’s Roost. It is titled, “The Quest in Earnest”. It was released on Grekar 2, 110.

The fourth book is called “CrIsis Triumphant?” and is from the log Choose Wisely to Missing Home, a total of 39 logs. The end of book has Chip stating that the group is in Sekti-Abtu for the Festival of the Pantheon of Ra- which would have been Ra 1,110, when CrIsis was actually in Sinza. This is Chip’s last ever entry. It was first released on Kym-nark-mar 14, 111.

Book 5 is named, appropriately, “CrIsis Changing”. It spans 49 logs, from The Mourning After (6/23/12) to Who Is Patch? (10/13/12). It starts with the deaths of Robert & Chip, includes all of Lemaria, and the acquisition and deposit of Osiris’ Rib Cage. It covers Bafag’s death, and the crowning of Minischmee. The book ends with CrIsis in the Northern Seas. Terramore & Quixis have joined to assist them. CrIsis is made up of Overkill, Cava, Gavin, Tyvernos, Drauka, Karma, and Ferrel. Book 5 is published worldwide Algor 1, 112.

Beginning with Book 7, Ondemeira the White takes over the writing duties, under the pseudonym Lady Torchwood.

Book 12- (The Golden Minotaur, and the Death of Overkill) 51 logs, Starts with The Lopanic Games:The Isis Gambit(8/2/14) to The Beauty of St. Jarvis(11/8/14). At end of book CrIsis is Asher, Azariel, Burlap, Caminata, Indaris and Xerx’ses. Begins release on Gryphon 1, 113, and is authored by Rod Rambler.

Book 16-(Giants and Loss) 59 Logs, Starts with Audience With Ra(9/26/15) to Azariel’s Notations(12/5/15). CrIsis had failed at Yggdrasil, but had succeeded in Nimro, although they had lost Hannah, and had thought they had lost Mack. At end of book CrIsis is Grignak, Indaris, No Name, Rooster, Ursus, and Xerx’ses. Begins release on Algor 1,114, and is authored by Rod Rambler.