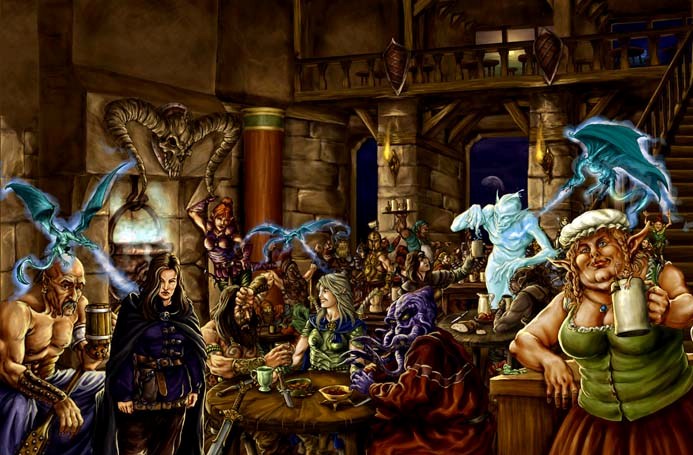 Have tables set out with clear empty one for CrIsis. Crudely made banner says “Congradulationz CrIsas!” Ogre standing near it clearly made it. Everyone is wearing party hats and have party blowhorns. Some people have Rams horns. Everyone has tables set out with a feast for CrIsis. People of the party try to seat crisis and pull chairs out and set napkins on crisis. A feast is presented with a large boar with an apple in its mouth and the best delicacies of the world.

As CrIsis is seated Mangy Carl stands up from his chair and the crowd goes quiet. Standing next to him aside from his group is a hairy Neanderthal of a man. “Now everyone as you know it’s Hairy Ted’s birthday today!”

CrIsis cheers alongside everyone for Hairy Ted!!!!!!!!

Mangy Carl continues. “Now Hairy Ted, what was it you were telling me would make a great present aside from what lies on the gift table?” Everyone notices a table stacked with gifts. A kobold is sneaking over trying to put something “on” the table but now the whole room is looking at him. Carl starts rapping his foot till the kobold sits down and he the puts his arm around Hairy Ted and draws him close to his side and waits for him to talk. Hairy Ted sheepishly says, “for CrIsis to win…”

Mangy Carl says, “For CrIsis to fucking win! And what did they do? They won!” Mangy holds up a goblet, “To CrIsis and the end of the reign of the church of dark!” The entire room joins him. Then he holds it up again and says, “To Hairy Ted! Happy Birthday!” The crowd joins in again and the feast begins.

Caminata stands behind Xerx’ses and uses her Osiris Jewelry for words of Truth of Carl and the magic is successful.

Mangy Carl congratulates CrIsis on their victory. “Congrats CrIsis on your victory. I knew you would win it. You don’t know how many people tried. Anyhow enjoy I am glad you are back to being one step closer to bringing balance back to the world.I know you probably still wish to hate me, for my past acquaintances, but I assure you I wish for the downfall of the dark agenda. You see I don’t want one side to win or lose. I want balance. I want normalcy. I want to return to normal, but I can’t do that till things are restored. I have screwed up my life and I will always have to deal with that. But with your help we can prevent the dark from taking over the whole world and ruling over us. I want to help you, but you have to want it. To relationships are give and take. I have done my fair share of taking, but not its time to give a bit. If you wish to ally with me I can make your lives easier. I can help oust some of the dark power around the world. In exchange I will have some tasks that will pop up here or there. For now I offer this free advice. I have a contact in Cynopolis he can get you information you may need one day. I will put you in contact with my aid if you agree to our truce. What do you say?” He looks at the party with a genuine look. One small tear forms in his eye as it looks like some sad memory came to mind while he was talking. He waits for a reply, but does not argue or try to win them anymore.

In a private room they verify as secure from hidden ears Azariel voices a case to kidnap Mangy Carl. Almost a half hour is spent in pros and cons for various plans and Burlap is nearly swayed, however, the group votes this singular idea is a bad plan and then agree to coming after him after Osiris is back. They agree to ally themselves for now with Asher as the contact to this world. Xerx’ses and Indaris were against it.

Caminata goes back to ask him to further clarify their arrangement, and test his truth, to which Carl wins over the group with the following.

"Look I liked Overkill he was a pirate and I am a procurer of information and ideas. I was the one that cast the River of Lava and killed him. I didn’t have to tell you that I don’t expect your forgiveness and when this is over I am sure to get a visit from the Lawgiver. However, I have read the books of CrIsis and to prove it I just exercised one of Overkill’s rules.

Wiping the tears away happily and a guard brings the party a silver platter with scrolls on it. “These passes will allow you to fly to your next destination without hassle from the Western Empire. Check out the seal. It is official and binding I promise.” He also looks out over the group and says, "Cami, please step forward. To you I grant this gift. He tosses a ring over the firey grates to her. "This was a ring that belonged to your friend. I find it only fitting that it should return to his comrade to carry out his goal.

THE RING OF THE WANDERER

I am filled with regret about this, but I feel that fate has brought us to this point. ReSet will pay for what they have done. Call to me when you fight them and I will do my best to try and aid you. They shall know my wrath!" He clenches his fist and pounds on his throne in anger. “I wish you all the best. Seek out my aids in capital cities. Ask for a Carl Mangerman the 3rd in each city, obviously through the thieves guilds.. You will find them or they will find you.I bid you the best. I must retire for I am tired.” With that he teleports away.