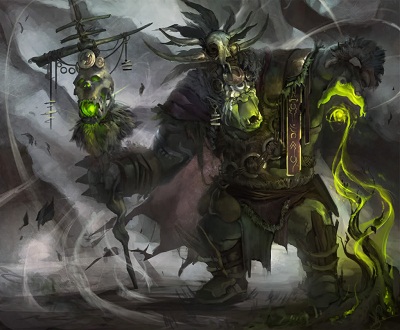 Corrac the Brutal was a mainstay in the Arena of Caer Itom for close to thirty years where he made a name for himself with his brutality in the arena. When he was a young shaman of 14 years, an adult among the orc, he met an trained a young troll in the ways of the shaman.

Currently he is 57 years old. Corrac is half blind and no longer able to participate in the games directly, but the Gamesmaster still keeps him around in order to assist Grignak in healing the participants. With Corrac’s ability to heal 5 people per ceremony he runs and Grignak’s ability to heal 3, they are able to heal 8 people at a time. It won’t replace lost limbs, but even so, they are able to bring people up to fighting form faster than many other arenas in Caer Itom.

“Did you have to take off their legs?” Corrac said to his young protege.

“It was only one guy’s legs, and he interrupted my speech.”

“This isn’t a battlefield, Master. These are the games. I’m just being a showman and providing more glory for my goddess.”

Corrac laughed even as he finished preparing for the ceremony. Grignak took his place beside his mentor and they began to chant,

There was a slight flicker in the torch light that might have been a trick of the eye.

It began to sound as if there were a quorum and not just the two men chanting. Slowly they began to dance around the injured warriors. For once there was no division: slave lay next to free and human next to kobold. In pain there is no racism. They knew what was required of them and the men inside the circle pick up the chant.

The lights distinctly dim as one of the men in the circle draws in a sharp intake of breath, but he doesn’t allow it to still his chanting, knowing from past experience that it will make the pain worse, especially now that he has a moment of respite.

Their wounds closed almost immediately and the color in their faces moved from a grey pallor to a more healthy pink glow, and least for those with non-monster race skin tones.

“You’re becoming powerful, Grignak. Both as a shaman and as a warrior. Don’t let that power suppress the good man I see inside you.”

“I will do my best, master, to live up to your teachings.”

“Now, go bathe yourself. I think there’s still a bit of intestine on your face.”

Image by Nik Silva at conceptart.com.