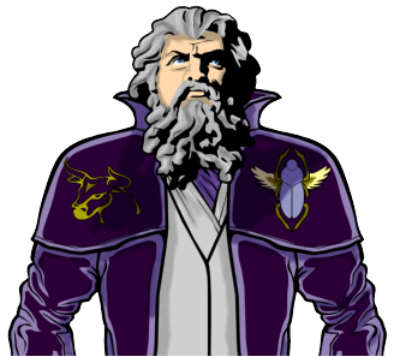 Donal is a priest of Apis that Azariel met while on a journey through the capitol of the Western Empire, Caer Itom. Azariel was pointed in his direction when his wife was poisoned. After their midnight meeting they became friends and the aged priest has become one of Azariel’s closest allies beside Nipshanks. He has a codename known only to himself and Azariel for safety. Azariel has promised to write to the Priest once a quarter to a pre-determined location outside the capitol city.

The Priest informed Azariel of the startling news that Father Lamriel and Az’s mother, Lady Shara Lechellsa, are pawns of Set and Anubis. They plan to set the world aflame, so that no matter what CrIsis does the Gods of Light will lose. If Osiris is resurrected to late, they will have diminished the followers of the Pantheon of Ra so much that they lose all their power. If they focus only upon the parts, they leave the worshipers to perish in darkness and disbelief. Azariel told of the allies of Set from other pantheons, with the story of Vald-Tegor in Baalgor, and of Utu at the Etrinan tribe. He also told of the Light’s allies in Dragonwright and the pantheon of the North, which led him to set up talks with fellow good priests and pantheons.