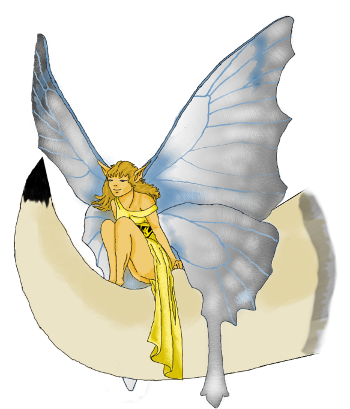 Hannah is…_______I can write my own description. :p. Wow…that’s about exactly the right size for my tongue in real life :). So, I’m perfectly tall. It’s not my fault that all you people are so overly tall. I mean how can you stand to get out of bed in the morning…never mind. You people have no sense of humor.

My hair is a perfect shade of crystallized honey when left to dry on a lavender leaf. I have a beautiful pert little nose and a perfect fairy figure, even if I do cover it with clothing. I love the way that a nice dress hides just enough to make everything that much more tantalizing.

I never wear shoes, as they get in the way of feeling what I’m standing on, or sitting on for that matter. In short :) I’m a fairy and I know how to use it.

Hmm? Oh, you want me to sit still? I have to…oh, no, sorry, I’ve never had someone paint my picture…oh and you’re writing down my words? That is so…

Have you seen the sunshine out today? It’s beautiful in it’s own way. I loved the sunrise. It was a fiery gold that went on for ages. Of course I danced this morning. I could…but dancing is fun! Fine!…

No, fine, I’ll stop pouting, but I think I look cure when I pout. How do I know? Well, I looked at myself in the still water of the pond and I practiced. Yes, I know, that smile was cute too. Yes, same reason. What, you’re telling me that you don’t practice all your best expressions in the still water…no, I’ve never heard of a mirror…I’m not stupid you know. I figured from your reference that it was a surface that reflected…that is as big as I am. How would you expect me to be able to lift that?

Oh, you just wanted me to see it. Well, I can understand that. Are you sure you don’t want to dance? Oh…well…I guess if it means I can get out of here sooner. Is anyone else hot? I can cool all of us off with my win…oh, I’ve done that already. Well, I had to do something. Sitting still is boooooring.

No, it so happens I’m eight…of course I’m fully grown. You wouldn’t expect an immortal being to have to mature would you…oh, you would. Well, have you ever actually seen a baby fairy…I’m fully aware of what laughing does to my bosom. Would you like a closer look?

Has anyone ever told you that you’re no fun. Yes, I meant to pout. It breaks up the monotony…well, we spring forth fully grown, of course. Life would be so much more interesting if you humans did the same thing. Your children have a much better grasp upon what matters than you do.

Well, of course there are new fairies. When a fairy mommy and a fairy daddy…ok, so this isn’t a how question as more of a why question. You do know we can be killed, right? Well, if every fairy who ever was or would be had already been born, then I’d have to assume we’d all be dead by this point. We tend to incur the wrath of the big folk, after all…oh, really, you’re not mad? I can see your nostrils flaring from here….not that I should be surprised. They are cavernous after all. I mean, do you have to use a ladle to pick that nose? Instead of being a scholar, why don’t you hire yourself out to a sailing vessel.

Huh? Oh, well, you know…for becalmed weather…all they’d need would be some pepper…look if I have to spell it out for you…sorry, but see, you just made me angry…of course I practiced that pose. How else would I give you just the barest glimpse…well, fine. I’ll sit still…for five minutes you say? Ok, I’ll sit here for five minutes.

Dum, de…has it been five minutes yet? But it’s soooo looooong. By the way, I can think of something else that must be long, considering your…wow, he’s already blushing and I never even got to the good part. Humans are so easy.

Oh, so you really want me to sit here quietly for five minutes. I thought that was more of a, you know, guideline. You know, as long as I don’t change my pose…did I mention that sitting still is boring?

My name? But you already know…oh, you want it in fairy…well why didn’t you…oh, yes, you just did. It’s Hannarataleriarehsodiaforimlinia. Hmm? I told you, it means Blue Bell. Of course it means Blue Bell…oh, you want a direct translation…no, I’m not scowling, I’m thinking. Of course I look like I’m in pain, or angry or something. I don’t like thinking. When you start thinking, then all these consequence things sort of come at you, and you have to worry if you’re doing the ‘right thing’…oh, the air quotes? No idea where I picked that up. I think it was from a ranger or something.

Why wouldn’t I hang out with another ranger? Yes, of course I’m a ranger…well, I’d show you my badge, but I keep it in my other pants…oh, you realized that all on your own, did you, or could it be you’ve been trying to sneak a peek under that skirt all afternoon…Yes, I realize it hasn’t even been 5 minutes yet, because if it had been five minutes, you’d let me leave.

Thought you’d forgotten that. The problem isn’t that I’m trying to come up with a nice way of saying no, it’s that I’m trying how to say yes. Fairy isn’t the same as your human languages…no it’s not like dragon…not it’s dragon. We fairies have been around long enough to name things correct…I know I’m only eight years old. Are you slow or something…I meant in the head…nevermind. My best insults would just be wasted upon someone of truly staggering mental dwarfism as seems to have been inflicted upon the parents who would condescend to bring the blinding lack of brilliance that stands, well towers at least, above me at this very moment.

A fairy must have perfect pitch…no, this isn’t a tangent, I’m explaining some of the background. Of what? Of language you dolt. I mean seriously, if you’re not going to pay at…ok, fine, but I was just getting into a nice tirade, and beginning to really huff and puff…you’re no fun, you know that. It’s one of my better poses. I call it ‘Sexy in an Angerferno.’ No, the air quotes were there I just didn’t feel like using my fingers that time.

See, that was a tangent. I’m explaining this so that you can recognize it the next time it happens.

A fairy must have perfect pitch…really? you don’t say…I mean, if you hadn’t just interrupted me, we might actually have gotten past the first sentence.

A fairy must…ha ha ha. Now you’re trying to make the fairy mad? Really? Have you ever seen a fairy mad? Yeah, I don’t pose when I’m really angry. I just end you.

Afairymusthaveperfectpitch! HA! finished. The reason for this is simply the fact that we were made that way. It is important, though, because our language was made for us as well…of course fairies were made. You think magical perfection like this just ‘happened’? Yes, of course I grabbed…it takes two hands…one each. You really are slow.

A fairy…just kidding. Our language, as I mentioned, was made for beings with perfect pitch. That means that we understand what pitch is being spoken…yes of course. It is the same as what you call song. It’s closer to chanting, but whatever.

So, as I said, we have twelve pitches that any syllable can be spoken at, and about three hundred syllables…I just did. Just because I was referring to the future as the past doesn’t give you leave to glare.

So, when spoken correctly, there are over three thousand syllables in fairy speak. The average word is twelve syllables long.

Hmm? Oh, well I don’t like being called Blue Bell, and I’ll take just about any option I’m offered.

Oh, no, I’m not upset or anything. Just thinking. Yes, the whole hummingbird-in-a-typhoon is tiring…to you humans. I just occasionally like to stop and look at the world around me. Since I have to sit here and wait while your artist friend finishes painting my portrait. I saw that look you two just shared. I mean if you two…I don’t judge. It’s a big world and everyone needs love somewhere…

You’re faces, I mean, that is a joke. That right there, that expression. Worth It!

I’ve seen some of you wear the symbols of your gods like a badge on a shield or sleeve.

Oh, you’re done? Thank goodness. You wasted a whole half the morning already…what? I never answered your question? If I answer, then will you let me go…not that you could really stop me…fine. I worship…no. I’m not hedonistic. I’m pretty straitlaced, for a fairy.

I was flirting. I mean, it’s not like I really could…eww. That’s just nasty. You have a dirty mind. I wouldn’t want to…even if I didn’t think that was about the most perverted thing I ever heard…I wouldn’t want to have sex with you. Of any sort…No, that was a real shudder. Thanks. Now I’m going to have nightmares for weeks.

Isis? I’m flattered, but no. We’re just too flighty for a studious b…road like her. Same goes for Thoth of course…that and my people still haven’t forgiven him for…look at the time. I’ve really got to…of course I worship the pantheon of Ra. What do I look like to you? A Spriggan?

Fine…and yes that was an artful sigh, wasn’t it? Apis? Really? I’m not a pixie either. They raised that squalling brat…I mean pretty collector for her not too long ago.

Really? Because I’m a girl I have to worship a female deity? Haven’t you noticed that most of the worshipers of Bast are men? Oh, really? It seems that way on most of her feast days.