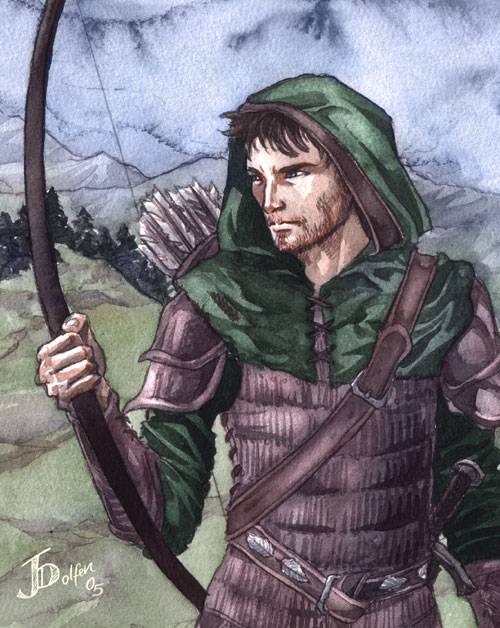 Herald is a ranger’s ranger. He has spent a grand total of 2 months in cities over the past thirty years. He makes his own clothing from the skins of the animals that he hunts and is fully capable of making his own weapons and equipment.

He is outgoing and likes to make a good impression on those around him. Originally met with CrIsis at Auntie Ev’s in Bletherad.

He joins CrIsis in their quest to find Glade.

He has the following definite skills:
Language: Elven
Language: Eastern
Language: Wolven
Imitate Voices
Disguise
Sewing
Cooking
Hunting: Eastern Territories
Hunting: Disputed Lands
Skin and Prepare hides
History: CrIsis (may or may not be accurate, but he has studied CrIsis. Likely only taken in the last few levels)

Use Cava for anything else skill or combat related, except Herald is level 14 (Critical does 3x, 8 attacks, 12 attacks with bow only, 1025’ range)

Gavin could be considered a terrorist for many of his actions, so this doesn’t necessarily define him as evil.

Herald is a terrorist. He feels that if citizens of the Eastern Territories are no longer living in the disputed lands, then they will no longer be disputed. He is not a part of the military. While he does a lot of scouting for them, many of his scouting trips result in burned out villages and murdered peasantry. He is a great proponent of the ends justifying the means, and will use whatever means at his disposal to achieve his goals, even if that includes manipulating stronger groups to work for him.

Stolen by Herald:
From Indaris-
Pass note for flying in the western empire from Carl, teleport to Sekti-Abtu amulet
From Ja’Deir-
12 Karat Emerald!