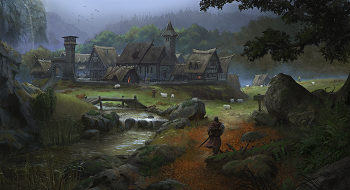 Hewe’s Landing is an Eastern Territories Colony located across the Inland Sea, at the southern edge of Northern Wilderness. It is the smallest of the three notable settlements in the area. This tiny village is little more than a homestead with a few extra buildings scattered randomly around it, connected by well-worn walking paths. The large, extended Hewe family sailed haphazardly from the Eastern Territories and built their homes pretty much right where they managed to land. As more settlers followed, some of those other people stuck around and built around the Hewe’s. Before anyone knew it a small village was formed.

Jeb Hewe is the current patriarch of the Hewe family, and essentially the mayor of Hewe’s Landing.