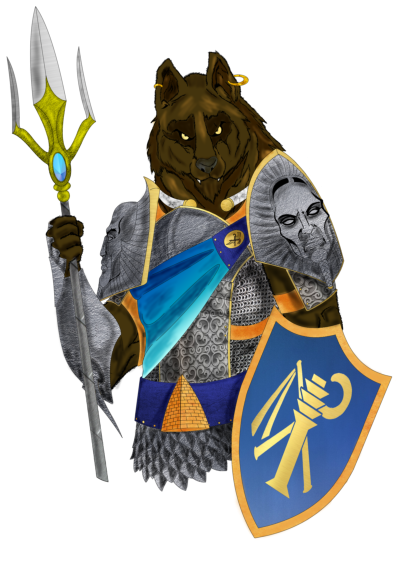 A very tall, large Wolfen, Huro is very muscular, and stands as if in the military naturally. His brown fur is a little darker than most of the Gold Ear Tribe, but identifies him clearly as part of the Komba, or Turtle, Totem. Of course, to reflect his tribe, he has large golden earrings.

He is often seen upon his Obaru, Mbawala, and is never far from his weapons.

His family, and his closest friend, call him Mikondo, but he has taken the name Huro to protect his family. The “Dustdealer” name comes from his mother, who said he was always playing in the dust of the mines.

Huro comes from a famous old Totem, or small tribe, in the Wolfen Empire- a founding group of not only the Empire, but of the Gold Ear Tribe itself.

Huro’s family are historians of the race, and of Palladium. Known to very few, the legendary Chronicler was a member of the Komba Totem. This sense of history has motivated Huro, with knowledge passed through the ages, to achieve Balance in the World, before the Wolfen and Eastern Humans repeat the slaughter of their peoples, like the Elves and Dwarves before during the Great War.

Huro’s father is Chief of Lore, one of the four chiefs in the Tribal Council, and pretends to worship Set, but actually worships Thoth. Anubis and Set are the most popular gods of the Gold Ear Tribe.

The knowledge of the Great War, and the loss of balance, brought Huro to Osiris, and in turn, to CrIsis. Huro hopes that the completion of the rebuilding of Osiris will occur in time to stop the Wolfen-Eastern war now raging, and is fearful that it is too late.