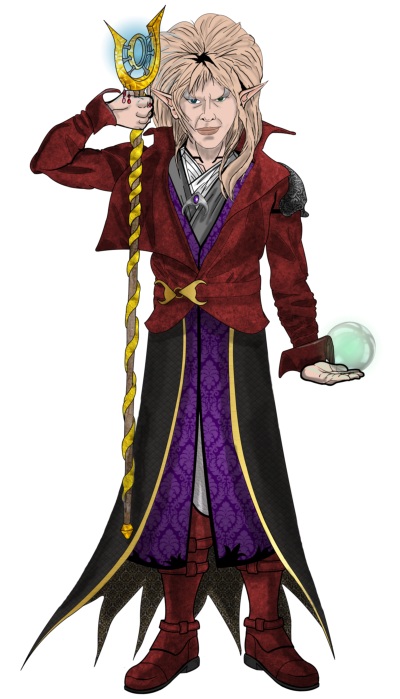 During the fall of the Elven New Kingdom one of the last Arch Mages among the Elves ran into a Goblin tribe loyal to the budding Kobold city of Skola Dur. Located on the side of the Silver Range Mountains that border the Timiro Kingdom. In the area what would become the Old Kingdom lowlands.

It did not take the Arch-Mage very long to subjugate the tribe and have them quivering in fear for their imminent death. In exchange for their lives they became his subjects and while the Purifiers look high and low for signs of the Arch-Mage that had conquered no less that six tribes of goblins and even the Kobolds of Skola Dur wanted him found. After 103 years of carving out a home for himself and his guardian tribes they all vanish without a trace. Though tales persist of appearance in the the Old Kingdom Mountains, Northern Hinterlands, Land of the South Winds, even one story of a raid on Phi 1,500 years ago.

Lock your children up or the Goblin King will come for them is the tale told to naughty children to keep them good.

This NPC is in honor of the late and great David Bowie and his portrayal of the Goblin King in the movie Labyrinth.