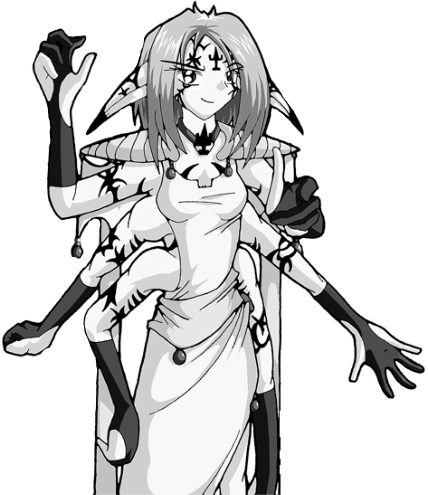 Thought to be only legend by many, the Jeridu date back to ancient times; they were one of the races that fought both for and against the Old Ones in the Chaos War.

The Jeridu are tall, slender humanoids most visibly distinguished by their six arms. These alone would make the Jeridu fearsome melee combatants, but they also possess natural acrobatic and gymnastic abilities. Jeridu look vaguely Elf-like (most notably in their almond-shaped eyes, delicate nose and mouth and attractive features).

They live between the Land of the Damned and the Northern Hinterlands, in the Great Northern Mountains that form a barrier between the two. In the last fifty years, some Jeridu have begun to leave the shelter of the mountains to go out into the world. Adventuresome Jeridu (especially warriors, mystics and scholars) love to join up with adventurers from the outside world and accompany them to other lands.