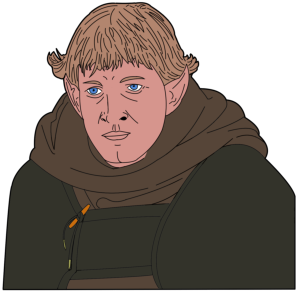 Ley-Rhy is not your dashingly handsome elven playboy you might see on the stage of one of Peedar Jaxstone’s epic adventure plays. No the dwarven playwright/director mogul would have definitely overlooked Ley-Rhy during a casting call. If you did not know better you would mistake him for a mere simpleton. It is only for his scratchy ungainly monk robes that even gives him an ounce of respectability. But, if you were to pass him off as a mere fool, you would be so far from the truth.

Ley-Rhy is rarely seen outside of his robes. And when he is he continues to hide himself beneath a long white linen garment resembling a nightgown. Ironically, he does not use it for sleeping. No, that would take too long to change in and out of. You see, his philosophy of fashion is two fold: Rule one, a true Monk is always modest; Rule two, a long-lived Monk must never be left to choose between dressing and bolting for cover. The world is a whole lot more dangerous place when you KNOW what is within the dark.

In addition to his earth-tone robes and linen undergarments of his orthodoxy, Ley-Rhy also has a string of meditation beads crafted from varying black and white pearls, which he makeshifts as a belt around his waist. Ley-Rhy can be seen at various times through the day, methodically counting the excess pearls. The pearls all seemed to be of different sizes, and in no particular pattern. When in uncomfortable situations Ley-Rhy’s counting habit increases. Rounding off his attire, the monk has two pairs of shoes depending on the season…a monk is always prepared for the worst. His spare pair he keeps in a messenger bag, which Ley-Rhy keeps VERY close to his side. Only in the most safe of circumstances, the elf will open this bag, which appears to be of stout worked leather with a very sturdy strap. Most people are only privileged to see the outside of this bag, which sports an embroidered Eye of Horus above a golden pyramid, and the letters D.O.O.S.H. Ley-Rhy is proud to claim that he is the founding member of the Defiance against the Old Ones’ Succession and Heritage.

Upon meeting Ley-Rhy for the first time, one might see pain and apprehension in the elf’s ashen-blue eyes. His nervous looks are sometimes off putting, making it hard to warm up to him. But he does have a bit of humor that is quite comforting. His smile is all elven, with perfect teeth like a Western Imperial noblemen. His wheat blond hair is course and full with thick curls at the tips. His chin has a noble cleft, that many scholars and public speaker covet. Though, his voice is not that of a rich baritone found in many public speakers, but that of an alley cat who sings in the middle of the night.

He is good friends with Malkin.

Picture by our own

1 Though he can’t be sure as he has filled his mind with too many fake memories so as to throw off any mind probes. It is hard to tell what is actual life experience, and what he has read in a book

3 Lands on his feet (no damage!) from falls or impacts that hurl him less than 30 feet (96 m). From a greater distance or height, the roll with impact rule is as normal.