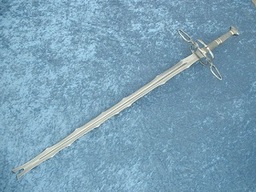 Made by Greminor Lector this 2-handed flamberge glows white when unsheathed. It is a demon-slaying sword, doing 6D6+ 6 damage to most, but double that to demons of Hades. It was given to Drauka at a giant discount, with many agreements attached.