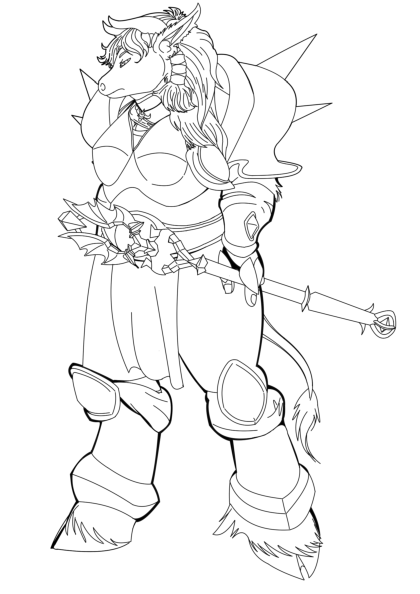 Luur’na is very young for a Minotaur having just turned 23 on the 1st of Ra this year PA-111. 15 is considered barely out of diapers since they can live to 400 years old. Just over a year and a month past she was handed Saraph, a nine foot gold and silver staff with runes, a Lightbringer Rune Weapon! She was tasked with helping her people seek out goodness in the world and not die in the caverns of the buried Dwarven Fort.

In many ways this was the best news she could have heard and now she might lift her mate, Zii’clymnt’s mood the way he did when Xerx’ses the second’s mother, Darakh’zan forbade her from pursuing her son. She had a vision of a path her son would be set upon by Isis herself and he would not go if he had “attachments” here. She always felt sad that Xerx’ses was forced down a path he would not know and may never return from. She trust in Isis that whatever course the young wizard was on was the right one. Zii’clymnt had been there for her and in time she learned she could love someone else. When she was chosen to wield Xerx’ses the first staff she went to tell her boyfriend/mate and he had been chosen to wield the huge black blade known as Lightning Striker.

That’s when things became worse, within a few days the oldest of the “Chosen Eight” Groun’na began warming up to Zii’clymnt and talking with him, showing him how to use a sword properly since he had been used to his ancient Dwarven poleaxe. Zii’clymnt’s view of the world started becomming darker and he got increasingly rude with Luurn’na, and asking if he was going to stay with him or follow her heart. She said they would gather a group and go where fate takes them. Using her boyfriend/mate’s tracking skills they would be find in the land above. This seemed to calm him down until he over heard her yelling at Gourn’na about Xerx’ses the second.

It was a few months later when the fire broke out in Azad’s tower, or one could now have called it Xerx’ses’s tower since that is where he nearly spends all of his time if he was not training with Mergerij. After the fire both Xerx’ses and Zeelik were complaining that Zii’clymnt and Gourn’na’s two bullies set fire to the tower. Luur’na denied it was deliberate and her pleas were all that kept Xerx’ses from going to the Council of Elders. That night Darakh’zan visited her in temple and told her she had done well, Xerx’ses had left for the surface and Isis was pleased. Luur’na cried for what seemed like forever, she knew what sacrifice was, and if she was to save Zii’clymnt from Groun’na and his thugs’s influence they would have to leave soon.

Ever since Xerx’ses received the magic pigeon note titled, “Your Blood is on Your Own Hands” Luur’na has been down dark roads of anger an grief. having lost everything she went to Troker to find Zeelik’s corpse and bury him. What found her was a priest of Modeus, the lord of Hades. While the details are sketchy and unclear exactly how her descent into darkness unfolded. What is clear is that she abandoned her faith in Isis and took up worship of the Lord of Hades and sought ways to wreck vengeance upon Xerx’ses. She tried to kill his last family member but vastly underestimated the prowess of Rostam Stonemace wielding Anzuroq! Out of the 20 priest sent 8 died in that attack with her dark priest’s cohorts helping her.

There was an attempt on Kom’var but the crew of Rogtilda proved to be stronger especially with Kom’var wielding Cynic in battle. It was here she was recruited into the Congregation of Terosh and later became part of the Blessing.