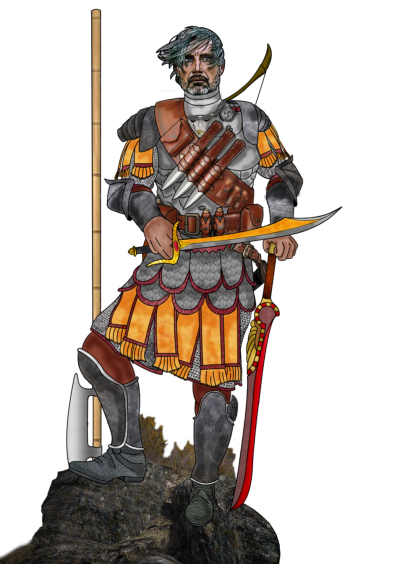 Mack is a 5’ tall human with silver hair and stormy blue-grey eyes. His life spent in the Yin-Sloth jungles have tempered him, giving him dark brown skin marred by several battle scars, including the loss of his left pinky – which is why his guitar’s strings are reversed, and he fingers with his right hand. The saying, “Armed to the Teeth” was coined by a Raksasha, who faced him half a dozen times before finally falling, because when Mack goes into battle, he always has his Holy sword ‘Blood-of-Osiris’ and his Falchion drawn, a short bow slung across his back along with his Voulge, Quarterstaff, and quiver, with his two silver throwing daggers, ‘Life and Death’ in a holster on his chest, and two ‘Eyes-of-Horus’ gripped between his teeth, the other ten in holsters next to his daggers for easy retrieval. He learned early that you should only be naked when you enter this world and when you leave it. Never between. When he worked as a slave for the Orcish Empire, he learned the basics of Blacksmithing, and then apprenticed to a Monster Hunter Weaponsmith. He’s used those skills to fashion weapons and hone the skills to use them in battle.

Mack is resurrected by The Man With No Name in his first use of the spell Athanasia.

Mack is a human slave, turned Monster Hunter, turned Orcish Singularei (meaning high-ranking personal guard) from the Yin Sloth Jungles, who has worked for years protecting the descendants of Doragon, including the current Orc Emperor, Orug.

He was a young warrior in his tribe when the Orcish Empire was founded, capturing and enslaving them. He slaved for years under the orc’s rule, until he learned enough about the orcs’ customs and language to establish a free community outside of the notice of the Orc Overlords. He staged a breakout, and got his people to safety, but he stayed behind to work his way into the good graces of his Orc captors, to make it easier to help the slaves to remain hidden.

He befriended his taskmaster, Thra’hall, and had mastered the customs and courtesies of Orcish Culture. In fact, he was close to becoming a full fledged citizen, with all the rights and privileges thereof. He learned of many gods, but the one he came to worship was Konesh, of the Pantheon of Ra. The writings of the other gods in that pantheon weren’t available to him, but he didn’t think he would need them. He converted whole heartedly. Unfortunately, he was framed by a competing, human-hating orc slave, for the murder of a captain of the guard, so he ran into the depths of the Yin-Sloth, steering clear of all those he knew, so as to keep their secrets safe.

Within a month he had lost them, but he did not have the skills needed to survive the harsh environment. Hungry, beaten, and near death, he stumbled upon the Monster Hunter’s Water Temple, deep in the Yin-Sloth Jungles. He studied there for almost two decades, learning the doctrines of all religions, the Blacksmithing trade, and even apprenticing to a head Monster Hunter Monk. He converted to Horus, who seemed to mirror his core better than any other god in any other pantheon. After his time training, he returned to the secret tribe, but was chased off by them, afraid he’d bring the ire of the Empire down on them.

He went to the now-retired orc taskmaster who he befriended during his days as a slave. The taskmaster pulled strings to get Mack into the palace guard, provided he posed someone else. He served three orc emperors faithfully, but the second one, Morbash, he failed, allowing him to be taken by a Tezcat Necromancer. He has lead several search expedition over the years to take down the villain.

His second expedition would have ended with his death, if not for a wayward tribe of Kankoran who had left the Hinterlands for the undiscovered depths of the Yin-Sloth which matched their ideal of nature better than anything they knew in the Hinterlands. He was nursed back to health, and given the opportunity to perform the Rite of Passage, which was a sojourn to the foot of the mountains leading to the Baalgor Wastelands. He was allowed a single knife, and a single change of cloth clothes. It took him three months, as he had to trek carefully and silently through some of the most dangerous stretches in the known and unknown world. He put all of his knowledge and wits into action, and he came back to the tribe with a dozen weapons, all useful against one YSJ denizen or another. He had pouches of deadly toxins, sleeping poisons, healing salves, and rejuvenating powders. The Kankoran Scouts that welcomed him dubbed him “Armed to the Teeth,” in honor of his most feared foe – the Raksasha that tried on multiple occasions to assassinate Morbash before his abduction – and because his sojourn proved he would never be without a weapon.

He returned to Orug, and told him he would take the warriors of his own choosing, and he would return with Morbash’s body. The last expedition he led consisted of 5 Undead Hunters, including Mack’s own brother. They were all captured by scores of undead, save Mack alone. He followed the beasts to their lair, and there met CrIsis. Sure of the futility of his quest from the tales of death and destruction CrIsis told him, Mack assisted CrIsis, leading them from the lair to the closest friendly city-state of Yin-Sloth. He enlisted the aid of some Undead Hunters to circumvent the Dragon infested lands, and saw CrIsis safely to the Sage’s holdings.

Since, he brought the news to Orug, whose adviser, Grukag (the one self-same orc that tried to frame Mack before) tried to have Mack killed as a traitor of the Empire. Yet again, Mack fled. Skilled and powerful as he was, as influential as any in the empire save the Emperor or his closest advisors, he knew there was nothing but death if he tried to confront it all alone.

As he left the Yin-Sloth Jungles for the first time in his life, he heard of the terror at the Millenium Tree. He set off like an arrow from a bow, to meet up with CrIsis and assist them.