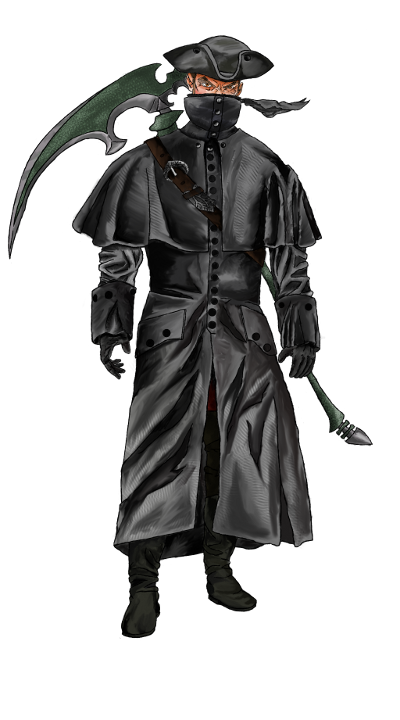 The Man With No Name has long dark brown hair topped with a black tricorn leather hat. He wears a black leather trench coat with a bandolier slung over it. The bandolier has latches that hold his scythe in place when he wishes not to carry it. His trench coat buttons up to cover his face to just below his eyes and under that is a cloth that covers his face as well. His clothes look stylish, yet versatile. They are definitely worn from the many battles he has faced. His appearance gives off an aura of gloom as if to say this man has seen many tragedies.


Picture from our own AZ Rune.

Not all stories have a happy ending. At least not for the man with no name. Life was simple for him. He had a nice little family on a nice farm in the Middle Kingdoms in the Western Empire. For him it was paradise. They grew enough to survive, pay taxes to the lord, and make a little on the side. Things were great. His son would one day take over the land and build a bigger family name. The man was not ambitious or enamored by power. To him family and peace were everything. He took joy in taking his son fishing and going on picnics and hikes with his wife. Unfortunately this would all change.

One night the man was putting his animals in the barn. He heard a loud bang outside his home. With all his might he rushed to his home fearing a bear had decided to invade his hearth. When he arrived there was a band of creatures standing in his home. His wife and his son were huddled in the corner. Terror filled their eyes. Their reaction on their faces betrayed his silent arrival. The female leader turned her malevolent gaze upon the man. Her beauty soon gave way to her cruel intentions. “Grab him,” she said. With that her minions quickly subdued the man. His meager attempts of escape were futile. “He shall watch them perish and it will be the last thing he sees.” With that he was forced to kneel helplessly as his family was slaughtered in front of him. Their screams of terror and anguish filled his ears. As he knelt there sobbing, she said hold him still for that will be the last thing he sees. The grips on his arms became as tight as metal vices. He struggled with all his might. There was no hope. The witch gouged out his eyes one at a time. Darkness filled the night sky. All hope disappeared. ‘’What now Lady Shara?’’ asked one of the creatures. “Burn them and the home. Leave this one’s body for the crows.” With that he was drug into the fields. He could feel the once proud grains brush against his body. Soon he felt the cold steel pain of a dagger to his neck. Darkness filled the already dark abyss. It was over.

“Get up and get your vengeance!” called a gravelly voice of a stranger. A hand protruded in front of the man’s field of vision. Blinding light filled his senses. Before him stood a man in black leather kneeling with one hand stretched out and the other balancing him with a sickle. Was this death coming to take him to the afterlife? No, it was the cruelty of life bringing him back to the mire of reality. With that the man with No Name took this strangers hand. In doing so the man began his journey in search of self and retribution.