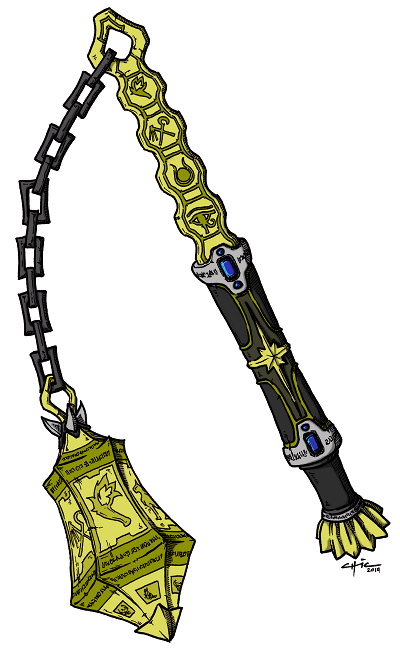 This legendary weapon was wielded by the Defilers’ priestess, Perfone. It was held secretly for many years by the Griffon family and Mikala. In Pegasus, 111, he gives it to Indaris.

It is decorated with runes and symbols of each of the gods of Light, and is a holy rune weapon.

Does 5D6+6 damage normally, but currently does 4x damage to old ones/minions of dark.

IQ 14
Principled weapon that only allows priests of light to carry it. If carried by others, 50% chance of drop each time swung. If picked up, does 3D6 damage to selfish/evil alignments, but 9D6 to supernatural evil/minions of dark.

Only speaks when spoken to, unless a minion of dark is within 200’- if minion is close will speak up and urge priest to kill! Does not change outward color or appearance- just telepathically warns bonded wielder.

Can change shape to any medium weapon, and can shield its powers to be unseen (in other words, appear as normal sword, staff, etc) if bonded. Bonding only occurs if used in 10 straight fights. If wielder wishes, it can also make the wielder appear to be a humble, begging priest- changes clothes and appearance. Equal to disguise 80%, or adds 20% to disguise skill.

Bonded person can sense its location 4 miles away

Will do 3x damage to Old Ones/Minions of the Dark if used for 10 straight fights, which bonds it to user, and 4x damage if used for 20 fights in a row. If another weapon is used in a fight instead the damage bonus resets to only double. However, the Left Arm of Osiris can be used with no penalty!