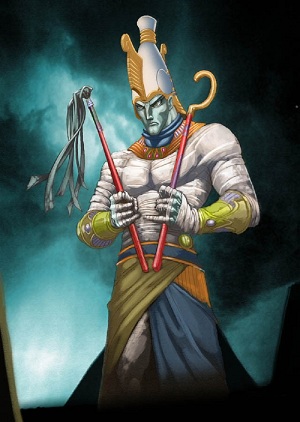 God who was broken into pieces by Set.
Osiris is in at least 17 pieces, spread throughout the Megaverse.

At the beginning of the campaign, there is only one truly safe piece of Osiris, the Heart of Osiris, located in Haven in the Eastern Territory.

There are thought to be between 12-15 of Osiris’ parts on Palladium. The other 5-8 are scattered, and Isis has 2 other groups looking for them. One of the groups is headed by the legendary Erin Tarn of Rifts Earth, who witnessed Isis become aware. The other group is the infamous Megaverse traveling group the Torch of Retribution.

To see updates on CrIsis’ quest to recover the parts of Osiris, please refer to the Osiris Parts Breakdown page.

The symbol for Osiris is the flail and crook, which he holds in the picture on this page. They are usually shown crossed in an x.

Spells available to Priests of Osiris: As scrolls, below. As spells, each is 1 melee/level of priest use, unless otherwise indicated.

Note: Scrolls can only be used by True believers of light.

Note on spells- Based on Parts abilities. There are other parts, and spells, but they are not known by the Palladium people.