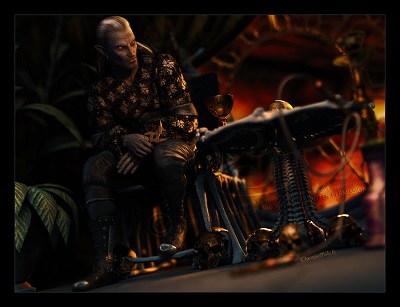 Pippin is a handsome guy. His looks allow for deception a trust that unwarranted but is clearly abused. The man has a rugged almost shaggy face but has the bad boy look to such a perfection that he almost get a woman every weekend; if he wanted one. His choice of clothes are a heavy leather with a cloak to cover his appearance. As Silk he wears a cloak with a spider embroider on it that turns into a sword he lovingly calls stinger. Because of his love of poison he has painted the cloak with poison so that when the transformation takes place it is almost dripping with the stuff. Pippin is a true blond and with his dark eyes and rugged hands he looks like a adventure that should have been in movies (if Palladium ever learns of such things). Pippin loves cigarettes and and occasional drink. A man of little talk, the only people he really talks to are people he respects and never speaks of his family.

Pippin comes from a family of wealth, beauty and prestige. The silver spoon was in his regular means of eating. His father and brother were magicians supreme in Lopan and he was destined to follow in their footsteps. They all wore the latest and greatest and had money to take care of their enemies political and otherwise.

That all changed one fateful night when the thieves guild was pissed enough for all of the money and talking (smack) they had been throwing around that it finally pissed a character (and guild leader) Yell Ash N’yll a Hobgoblin that was one of the chief High Lords of the Thieves guild. He was a cobbler and Pippin’s family had gone two far by revealing the secrets of the guild that his father had acquired and when the authorities crashed their safe house full of their secrets and some of their most precious valuables (stolen of course). Pippin’s father and brother had become sick of the mafia’esk power that the guild had on the locals and the local school of magic.

When the thieves broke into the house on that fateful night, the two most powerful mages in the house and perhaps in the whole family/clan died that night. They attacked with such fury that the family didn’t see what happened. They stole everything that was not nailed down and binding the mages in the home they set fire to the house. Pippin’s mother saved his life while was severely burned by the fire. The whole family died save his dear mother who wore a vial to this day. Partly for mourning, the other for the permanent scars.

The money in the next few months without a provider the magic guild took what was originally theirs and there Pippin stood with his mother, penniless with just the clothes on their back. An old friend offered to pay for his continued schooling and even offered a part of the funds to his dear mother. Pippin took the offer. His anger and lack of skill was a kindle for what was going to be his path of revenge. For fifteen years he studied, taking special interest in skills that would allow him to get his revenge. A month before graduation, his mentor found that the youth, Pippin, had run away to get his revenge. The skills were keen and of a great magic user.

Two months later he was discovered in a gutter, beaten. His magic was good, real good, but his magic was premature. He left the magic order. Magic was going to get his revenge. He wasn’t seen again for another fifteen years to emerge as an assassin called Silk. When Lopan authorities caught him he had killed Yell Ash and a dozen chief leaders and a few minor thieves of the guild. When some of the thieves would be discovered their dying breath would utter the name of Silk not knowing that Pippin was responsible.

Lopan appreciated the work that Pippin had done but he was a criminal and killer and Lopan would not make that kind of character a hero or ‘Robin Hood’. So giving him his last request to be at “The Games” he was banished to Wolfen country. They hoped that he would become a hero there by killing the Wolfen people. How disappointed they were when the legend died after he left.

Silk/Pippin initially because of his strong racist upbringing was a killer of the Wolfen people however when he saw was soldiers of the Eastern Territories attack and kill cubs and go after a she-Wolfen who was unarmed, with the intention of burning her, he saw the thieves in his mind and went to action. Killing three soldiers and watching the others scatter like sheep, he spent the rest of the day nursing an unconscious she-Wolfen risking his own life to save hers. When she came to in the morning, all she saw was the ‘noble elf race’ that had saved her. That was the beginning of his life among the Wolfen people. Though Silk loves his homeland and refuses to change citizenship, out of loyalty, he has the heart of a Wolfen and a strong love of the Wolfen people.

Silk has not been a religious man much at least in public. He doesn’t mock people nor ridicules them for their faith but will not openly pray. Privately the man is in constant prayer. He shows it in a mantra that looks like an assassins exercise, ever flowing. The god Ra knows of Pippin because daily the assassin prays to the sun god with the intent of gaining forgiveness. When the gods called for Pippin he was living in Havea.