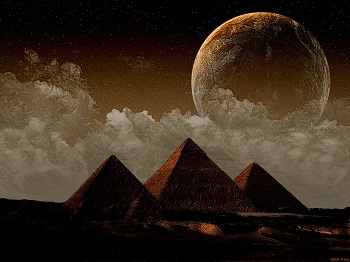 Pyramids of Osiris are being erected throughout the Palladium world. Some will hold pieces of Osiris, and some are decoys. Some have sprung up as if by magic, others have existed for centuries, and yet others are just now being constructed. Update-Gryphon 19, 113- CrIsis finally solves the mystery of the Obelisk of Osiris, and are rewarded with the Pyramid Map, showing the true locations of the pyramids.

There is, of course, The First Pyramid of Osiris, located near Nisi in the Timiro Kingdom. This is a pyramid that has existed since before the Elf/Dwarf war. CrIsis later places the Member of Osiris there.

A second Pyramid has appeared Credia in place of the “Star Plaza” monument overnight one the first day of the new year in 113 P.A. This makes the second pyramid in the Timiro Kingdom. CrIsis later places Osiris’ Lung here as well. See the log Time Is Fear’s Cold Sweat for the mention of it.

The most famous pyramid at the beginning of CrIsis quest is the pyramid located in Haven, home of the Antes Temple and the Heart of Osiris! CrIsis later places the Left Foot here as well.

Overkill’s research at the Library of Bletherad indicates there is one on Inner Cadeth, a Bizantium Shadow Coast colony in the Northern Hinterlands. It is protected by at multiple Phoenixi! Duke Minischmee has visited this pyramid.

Bexx’ research at the library told of one in Avramstown in the Northern Wilderness, protected by Ramen! CrIsis reaches this pyramid on the 5th of Thoth, 109 PA. Here they all meet Isis Herself!! She creates for the Tongue of Osiris the same protection effect that was created for the Heart of Osiris in Haven.

Minischmee informs Overkill in a note that there is a pyramid being erected in Sinza, which CrIsis visits while it is under construction. It is simply named the Pyramid at Sinza. They later place the Rib Cage of Osiris there, with Bast presiding.

A ziggurat-style pyramid that is well known is the High Temple of Shandala in the Old Kingdom Frontier. This High Temple now contains the Osiris’ Right Femur!

Drauka tells of a pyramid that has existed for centuries in the town of Sweet Creek in the Eastern Territory.

Navelo speaks of a pyramid that suddenly appeared in the Temple District of Epiphany. He states that it is guarded by Phoenixi at the base, and there have also been sightings of a sphinx at the top. No one has entered it yet- even the Overlord of the region, Ulstrian Kaze, was denied entry.

Nipshanks tells of a pyramid that is being constructed in the Western Empire town of Springgate, in the province of West Kighfalton.

CrIsis brings the Right Hand of Osiris to the Pyramid in Sekti-Abtu.

Malkin says that a Pyramid is now standing next to the Library of Bletherad on Y-Oda. When CrIsis reaches the Library Pyramid it is manned by Bungo, Caminata, and Burlap! They will tell members of CrIsis that Donal is summoning an Old One, and the date is thought to be the Winter Solstice this year. They wanted to stay, but Isis commanded them to be protectors of this pyramid, but to pass the news to CrIsis. Donal must be stopped!

The Pyramid map makes clear there is a pyramid in Mishala. It also shows that there are pyramids somewhere in the mountains of the Land of the Damned, the Western Empire, and Bizantium. The exact cities are currently unknown to CrIsis.