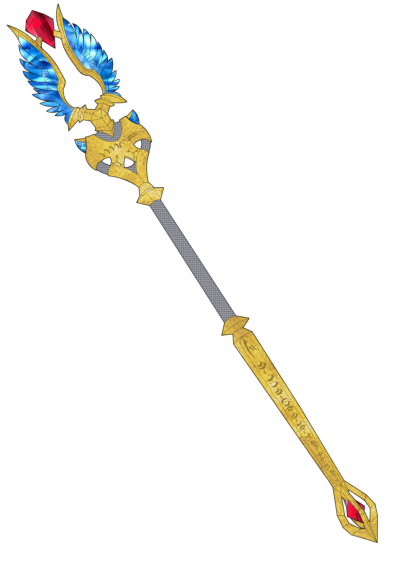 This ancient lightbringer runestaff was thought to have been one of the greatest achievements of rune smithing from the days of the Etrinan Fortress Dwarves. When the fortress and its grand library had been completed a demon was sent by an Elven summoner that had been alerted by otherworldly servants. A Dwarven Priest of Isis called for aid and a single Seraph Angel was sent to aid the Dwarves.

A year before the Dwarves had made a rather unusual discovery when they opened up a tunnel into a subterranean tribe of Minotaurs. They called themselves the Etrinan Tribe and the two became friends and allies. During the demonic incursion their knowledge of demons became crucial. The main heroes were the Dwarven Priestess of Isis and the Seraph Angel supported by their eight minotaur paladins. Whom were each trained by the Seraph Angel! Future legends among the Etrinan Tribe referred to them “Horns of Isis” for even the Dwarven Priestess was gifted with a horned helm enchanted to let her perform a minotaur charge attack.

In the final expulsion of the demonic forces the Seraph Angel and Dwarven Priestess were mortally wounded. The Dwarven Runesmith said he could save their souls that they could continue to fight eternally. The pair agreed and they were merged into the runestaff. Legends don’t record their individual names only the new name the conjoined soul chose for itself – Saraph. It was among one of eight extremely powerful rune weapons given to the Minotaurs for their service then and throughout the Elf-Dwarf War.

It is currently in possession of Laval’liere Lightbringer.

All weapon art by AZ_Rune.