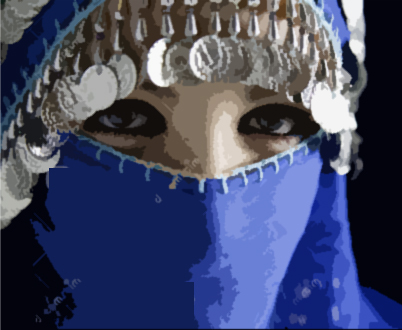 Sharic Tennysun was the only friend Drauka had when he was taken to the Temple in Sweet Creek. She is 5 feet 9 inches tall, and 115 lbs. She serves Horus, in the Pyramid of Osiris’ Library in Sweet Creek. She wears loose fitting robes, and a scarf around her head, that is usually covering her face. Most think it is to add mystery and allure, even though she has taken a vow of celibacy. She really wears it to hide her perpetually saddened expression from her one true love.

Biography: Sharic grew up in a Danzi Shabet with her father, Otriel. They lived openly among the Majec clan. Her mother left them when she was very young, and never knew any other siblings. She felt that the Danzi were more her people than Changelings they ran into, and rarely thought of herself as a changeling. While moving the shabet, they ran into a pack of Changelings from her father’s past. The changelings requested an audience and met with the Shabet-tza and Shabet-ta, and Shaman, who ordered all the changelings currently traveling with the Shabet to leave, principally Sharic and her father. From the horrified look in the eyes of the shaman, Sharic started to question who her father was, and what he had done. They started to travel from city to city in the Eastern Territory she got to know the human people, and even though she had to keep her true self hidden, she fell in love. Through her life she became a confidant woman, someone who could be anyone, more than just appearances. She met her heart’s twin in the temple of Horus in Sweet Creek. He was a priest, and his love for her was only beaten by his love for his god. His sect was one that required a strict vow of celibacy, so his desire to be Sharic’s husband shook his devotion to its core. Otriel saw that Sharic was growing roots, and feared for her life, if his past caught up with them. He met with the priest late one night on a balcony. They fought, and Otriel ended up tripping over the railing. He died instantly on impact. Sharic saw that trying to go against vows made with gods only results in tragedy. She changed her appearance and applied to be a priestess in the order. Thinking back, she doesn’t know why she did; whether to destroy the sect that had destroyed her heart’s hopes and dreams, or to live and grow old with her love in the only way possible. Either way, she rose through the ranks, till she was the priestess in charge of the small library. She learned she had a love for books. In her training she left on humanitarian and proselyting missions, after which she would rest in the stationary danzi settlement run by Raq’el, the Shabet-ta. She got to know Raq’el and her husband, Drauka. They are the only ones in her new life that know she’s a Changeling, and know her true name. She goes by Priestess Tennysun to everyone but Drauka now.