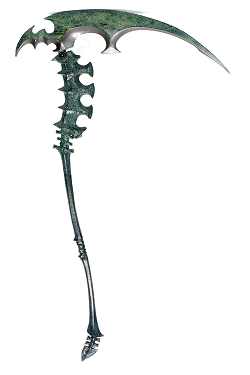 The Man With No Name found The Vindicator while rescuing a small town plagued by a vampire lord. This weapon was chained up in a chest at the darkest depths of the Lord’s keep.

It is a greater holy weapon, doing 8D6 damage, with the following abilities: (Moved from 6D6 to 8D6 damage on 8/8/113)
Negate Poison- 4th level 6(x)/day as well as 1D6 HP
Expel Demons/Deevils- 89% Lesser, 44% Greater. Throw straight up in air. Takes 1 attack, but expels to own dimension for 140 days.
Extra Damage (included)
Circle of Protection-
Silver magic halo- only seen by Priests/Palladins/Minions of Light/Dark
Does Double Damage when used against any undead, including zombies and skeletons, and against Deevils, Demons, Minions of Taut and Gods of Evil.

As of 2/9/114, Vindicator can deliver a soul blow, called The Reaping- Must be called before the attack, can only be used once on that individual. If successful strike, victim must save vs magic at 15. Successful save means the victim takes 2x damage, 3x damage if creature of magic or supernatural. Failed save the victim’s soul is taken directly to Khonsu for judgement! Vindicator can send 6 souls per calendar month to Khonsu. See the Reaping page for victims.