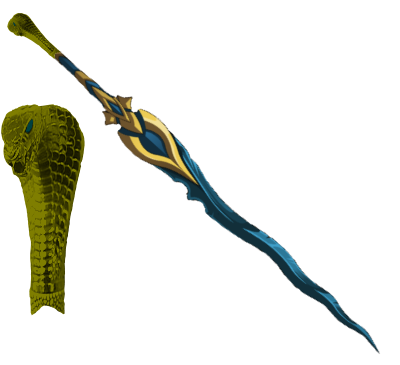 Xerx’ses is given this blade after winning the right to represent the Gold Coast Trading Company as the Swordsman Champion. Forged by Dwarves it was modified by his Step-Father with the chief Dwarven Swordsmith of the Church of Light in Sekti-Abtu. Named for Ra’s chief minion, the golden cobra: Uraeus, its pommel was recast as a cobra’s head. It’s eyes on the cobra head are inlaid with two 6ct. emeralds cut from a stone that was in Xerx’ses possession. The handle is inlaid with lapus lazuli to resemble the crook staff used by Osiris. The blade color forge altered to a deep blue hue like the life giving rivers governed by Apis and used by snakes to sneak up on prey. The blade was etched with eight of the same prayers found on the Flail of Prayers, and taken from the Book of Ma’at of the Pantheon of Ra!

Rostam Stonemace made it clear that he had a vision to give his son another tool for prayer and battle when he was no longer bearing a piece of Osiris. He then whisper to his son the last part of the vision.

“…if you lose this one Uraeus himself will come for you!”

It is just under 5ft tall, at 58 inches in length from tip to pommel. Xerx’ses has been training with it every day and it is always strapped to his back. The flamberge sword is a two-handed weapon except when wielded by a giant race, like the Minotaur, which Xerx’ses is.

This sword is used by Xerx’ses to win the Dueling event in the Lopanic Games and he wins the gold medal in dueling with it. As a reward the lightning enchantment was done for free and Xerx’ses went to the one that did the enchantment to get the other two abilities added. The enchantments were done by the owner of Gabriel’s Alchemy: Master Alchemist Gabriel, based out of Caer Itom.

See the logs Mortals are the Shadows in the Light & Dark, and The Lopanic Games: All Things End.

Sword from AQWiki and modified from several pictures of cobra sculptures in Creative Commons.