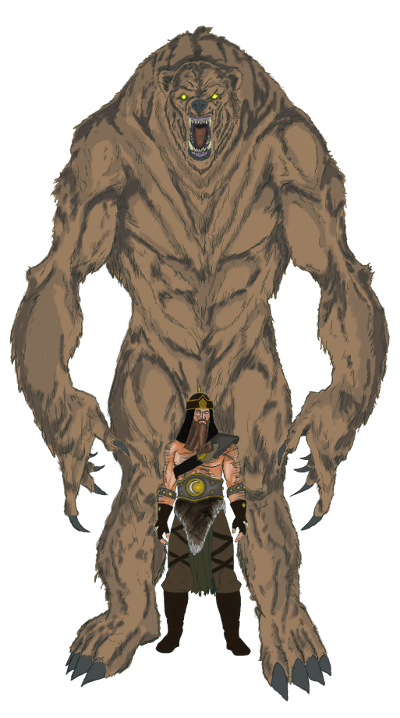 Human by Day, Werebear at Night, Worshiper of Khonsu

Ursus is a very tall, somewhat stocky human. His hair, beard and body hair are all dark brown. His hair and beard are so long and thick that you can only see his stark black eyes staring out from the mane. When he wears clothing he wears very little; usually just his hand made leather armor. This shows off how very hairy he truly is. From His neck down to the tops of his toes, he has very thick hair exuding from nearly every inch of his skin. When fully nude it is very hard to tell if he is fully nude, at least from a distance. Get up close and you can definitely tell he is nude in all his massive glory. Although stocky, he is not fat by any measure. In fact he is very muscular, but not an Adonis type. His muscles are large masses of flesh seemingly strung from his bones.

When he is transformed he looks like a very large (much larger than average) great brown bear from the Nodiak region of the Northern Hinterlands; only you can see the human intelligence behind the animal eyes. He is able to walk and run on just his hind legs, although he prefers all fours.

Ursus Arctos is traveling along the coast of the Northern Sea. He is traveling at night in his full bear form. One, this is his best camouflage when traveling; two, in this form he is immune to the effects of the sub-zero temperatures. He travels a lot, especially in the winter. This is the best time because not too many other creatures are traveling at this time of year. He comes to the crest of a hill which seems familiar. When he is at the peak he looks down. He then remembers why…

The village of Kanáta’; he has been here before, sort of. He avoids all humanity when necessary. He doesn’t like the temptation of his instinct and nature. He doesn’t know why, but he knows that what most of his kindred do to humans is wrong. It is very hard for him to ignore the yearnings he feels inside, so he avoids humanity, sustaining himself on large wildlife, but not the Nodiak that are around, he feels too close a kinship. The reason he remembers is because, the first time he came across this village, a Shadow Colony man happened to see him on the hill and recognized him for what he was. The man yelled, threw a spear at him and ran to the village. Ursus turned back to take a different path. Since it was late, he decided to sleep. Finding a random hole he lay down and slept. The next morning he awoke and continued on. After about a mile he smelled the sweet scent of fresh kill. While he usual got his own kills, this scent peaked his curiosity. He investigated and found three large kalrucks (similar to earth walrus) carcasses at the top of the hill where the man tried to spear him. He sniffed it thoroughly to ensure it was safe for consumption; nothing strange. He took a single bit to test. He waited a few moments; no ill effects. He consumed one of the remains. He realized that the village had offered a sacrifice to him to leave them alone. He had heard of this from his Father, but had never seen or experienced it himself. They had given him what was probably there entire winter store. He didn’t mind appeasing a ritual, but had a problem with taking their entire stock. After finishing the one, bones and all, he used one of the tusks to clean his teeth. He grabbed the other two carcasses and dragged them to the village limits. Once on the very edge, he yelled out as loud as he could in his broken northern:

“I the great demon bear am satisfied with your offerings, but I am not a greedy demon, and do not require all that you have given. I have decided to gift this back to your village.”

At that he dropped them turned and walked off…

He felt joy in seeing Kanáta’ again but something was not right. The smell of the place was different. There were non-Shadow Colony humans in the village, very rare this far north and at this time of the year. He had to know more. Staying in Wearbear form, he meandered toward the village. He didn’t want to attract too much attention. As he got closer, the smells got even stranger, strange fruity smoke that he had never smelled before and human blood, fresh blood. Something was wrong, very wrong. He picked up his paced and reached the edge of the village. He could see strange wolf head statues at the eastern entrance of the village. They were carrying flails in one hand and ankhs in the other. That was when he noticed in the center of the village a large circular stone covered in blood. Then he heard a scream, it was a young adolescent Shadow colonist, who was naked, being dragged by two Werewolves and a very tall human (he could tell by the scent) wearing a Wolf’s or dogs head. He couldn’t tell he had never seen this kind before. The sight enraged him completely causing him to shift into a full rage. 2600 pounds of seventeen foot tall Wearbear came rushing at the two Werewolves. He was able to slice the head of the first one clean off with one blow, the other he gouged deeply but it didn’t kill him outright. He was healing quickly; Ursus turned rapidly knowing he would have one more shot at finishing him before he countered. He rushed him and got both arms on him and squeezed the creature until his head popped off, literally. The tall human, was shocked at first, but regained quickly. He pulled a large Silver blade sword from a scabbard. Ursus threw the body he had in his grasp at him, knocking him over and stunning him. He leap on top of him pinning his arms to the ground. He demanded to know what he was doing to the people of this village. The man was very calm all things considered. He just said

“I am serving my god and master, and I am guaranteed a place next to Master Anubis when I die and will be rewarded greatly.”

“OK, let me hasten your trip; you might want to ask for a new head when you get there.”

With that he bit of the man’s head and swallowed it whole. After he stood up he saw the rest of the remaining villagers coming from the great hall. One of the elders started to chant and the rest chimed in. Ursus realized they were praying to him and he could not stand it. He immediately changed to human form and yelled for them all to stop. It took a couple times but they all stopped. He then tried to explain that he wasn’t a god, just a regular creature who didn’t like to see this great and kind village suffer the way they had. With that he turned and walked out of the village, grabbing the heads of the were wolves and tossing them into the altar pyre.

After he was far enough away he turned back to full bear form headed to the sea and washed off the stench of those foul heathen wolves and defecated the skull of the man. He then pulverized the skull to dust, every last piece of it. While he was sitting in the water the sky cleared and the full moon started to shine, which was strange as it was supposed to be a new moon. Then the Moon started to fall out of the sky, not fast, just a steady pace. Ursus stared in amazement, having never seen the like. The Moon landed on the ocean to the north, but began to rise again, only it wasn’t just the Moon, it was a figure and it was right in front of Ursus. He was totally shocked and could barely move.

The figure spoke, which caused him more shock:

“Ursus Arctos, I have been following you for many cycles of the moon and sun. I have observed your ways and I am captivated by your actions over the cycles. You avoid Humans at all cost, the one time you come across one, you leave him be. After they try to appease the “great demon bear” with a sacrifice, you give it back, well most of it. Then tonight you went against every observation I have made of you. Can you tell me why you did what you did?”

Ursus starts to stammer and sputter. He then pulls it together saying:

“This was the same village that gave me the ‘sacrifice’ those many moons ago. I felt a special bond with them. They left me alone and wanted to be left alone, so I obliged. Plus, even though my nature considers them prey, it just doesn’t seem…right to attack and kill them just because they are there. I just have always felt that way. So when I came across the village again and those vile wolves were helping to sacrifice the villagers, for whatever reason, my blood just began to broil and the only way to cool it was to help them to their death. So I obliged. I tell you one thing, if I ever come across anyone else wearing the same clothes or using those same statues, I may just let my TRUE instincts take over and destroy them all.”

The figure responds to Ursus

“Ursus, those two wolves and the man were devout worshipers of Anubis, trying to establish a religious foot-hold in this realm. You have angered Anubis by killing them in such a manner, for to truly be heralded into the afterlife you must take every part of your physical being to the grave with you. Since you have destroyed the heads so thoroughly, especially the humans, which even I find disturbing, Anubis will hear of it and may send more foes to send you to his hell. Because of your actions though, I have decided that this shouldn’t happen. For I am KHONSU; a god of the Church of Light & dark and God of the moon. My fellow Gods have been embroiled in a battle, in which I have stayed neutral. But because of Anubis trying to over reach and your actions this night, I have decided to take a side, and I have decided to have you as a champion. I see moral in you and I may call upon you to help in this fight. For now continue on your journeys, but be weary of strange beasts that mean you harm. For I know not of when and how Anubis may decide to enact revenge upon you.”

With that the figure sinks into the water, the Moon rises back into the sky, the clouds move in and cover the moon.