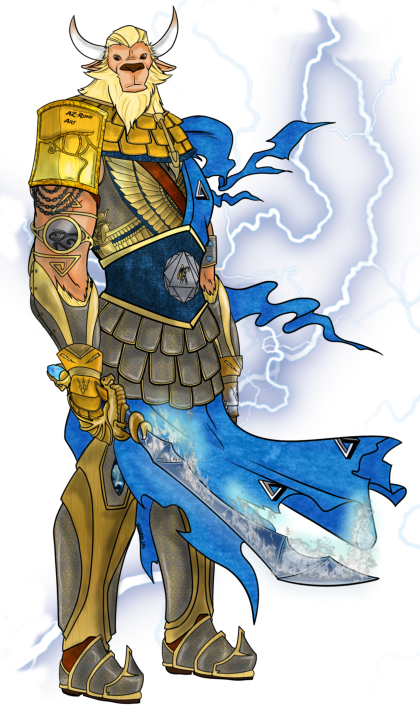 Xerx’ses is among the tallest of Minotaurs and has a body built like an Olympic sprinter. His skin is light grey like a storm cloud and what hair he has is black. His off-white horns turn forward very quickly and jut upward sightly at the black tips which make charges and goring easy. He gained some scarring on his left torso and the back of his neck and head from the fire he was in as a youth. He asked it be treated but allowed to scar so he could remember the abuse of power. Thanks to his time with Mergerij he looks like a minotaur scout in prime physical shape. He has one robe and one cloak (for cold weather) made of the hide of a Mologoth beast and he straps his suit of enchanted, Elven-influenced, full plate-scale armor – the Harness of Law – on top. He has one large bag made from the same Mologoth hide he keeps his supplies in it, which used to belong to A’zad. At night he can be seen praying for guidance and the power to smite evil and redeem his people.

Xerx’ses looked on longingly at Luur’na the Priestess of Isis, “How can she not see the stain on his soul.” Zii’clymnt used to be an upstanding noble warrior, but ever since the elders gifted him with the great black rune sword, Lightning Striker. He has changed and began agreeing more and more with Groun’na the dark reminder of why the world hates his kind. Groun’na has already gathered two of the impressionable young minotaurs to his idea of trying to strike out and either take over a tribe or make their own. Mergerij, has been giving me some training as a way to vent his anger about a situation that has gotten worse over the last 10 years…

:: Xerx’ses leaves his home to make his way in the world ::

…Xerx’ses was the outsider of those his age in the tribe, he was the tallest minotaur he had ever met: 11’ 3" tall and only 600 pounds which also made him one of the quickest, fastest minotaurs around as well. Many among the tribe thought he would become a warrior to be feared and Groun’na took him under his wing, he saw that he was a good with knives, and showed him how to become deadly with pinpoint accuracy, and his father taught him how to handle fast weapons such as small blades which could be used in normal fights to take an enemy down without killing them.

In the beginning, Cyrus (as Xerx’ses was known in his youth) had found some old chains when he was 8 years old. They had manacles on them, used for prisoners during the Great War between the FAIR & the STRONG. Cyrus began learning how to use them as weapons. He made a belt out of the chains, and this really scared some of the elders. Cyrus just told the minotaur elders, “I keep them as a reminder to never let the past chain us from what we can become.”

“Death comes to us all son, be careful you don’t hasten its journey to you,” Cyrus’s father said. Cyrus saw his father smile and he knew that the great and wise Xerx’ses NEVER gave praise or approval when it was not earned. A’zad, the oldest among the elders, also smiled and Cyrus knew fear for the first time! A’zad was said to be over 600 years old and one of three that had seen the surface still living. A’zad knew how to fashion magic energy to do his bidding and was said to traffic with earth spirits!

When Cyrus was 9 his father was an elder of the tribe, a priest of Osiris the Lawgiver and his mother was a devout priestess of Isis and the Pantheon of Ra. She prayed everyday for a chance to prove that the righteous minotaur could rise above the sins of the past. Cyrus’s father wielded Saraph – the Lightbringer, a Holy Rune Staff, and died defending the fortress with a number of minotaur elders from demons that had found the cave and attempted to sway the tribe to evil. Cyrus’s father exorcized them from the minotaurs they had possessed and then smite them with A’zad’s help. However, in the final battle he was dealt a fatal blow that could not be healed. He gave Saraph to his wife and bade her find and teach its next wielder. It would be 19 more years before she would receive a vision from Isis about a child being born within the tribe, Luur’na.

Cyrus took his father’s name as his own and vowed to become powerful enough to fight the monsters of the dark. When Xerx’ses was 10 he began wandering off into the caves and began digging out areas always helping to strengthen the catacomb tunnels or free someone caught in a cave in. He learned how to look for danger moving rock and the script of the races of the STRONG & the FAIR (dwarves & elves). He found a cache of books made of iron plates bound together. He hid them and began to read them each night, they were books on how to feel for Dragon Roads (ley lines) and Gateways of the Dragon (ley line nexus). Others dealt with all kinds of topics about the Great War, Time of a Thousand Magicks, the War of the Gods, and the Age of Chaos. Then came the mother load as Cyrus, now known as Xerx’ses the younger, found a book with writing he could not make out. It was make of iron and bore silver runic sigils upon its cover along with two silver plaque serpents, one on the front and back. When he tried to open the book the two silver plaque serpents came alive! Only his naturally hardened flesh allowed Xerx’ses to withstand the bites and crush the snakes using his fists! Then the two plaques re-appeared and the book fell open. The pages were painted in silver symbols the book seemed to contain more and more pages as it was turned! Xerx’ses the younger took this to his mother whom sent him to see the old one, A’zad.

A’zad listened to the tale about the books and the silver serpents that attacked Xerx’ses and he explained that he would look what he had found. The old minotaur knew what Xerx’ses the younger had vowed when the community watched his father’s body burn on the pyre. He handed the young minotaur a scroll and had him practice words that made no sense to young Xerx’ses. His accent and pitch was flawless, and after practicing the words for one hour A’zad turned to Xerx’ses and said, “You have one chance to gain the power you want avenge your father’s name and prove you can smite evil as he did. Open the scroll and repeat those words then try to read the book!”

Young Xerx’ses did as he was tasked, the scroll flared with a flaming spark and burned away in the startled youth’s hands and before he could react A’zad shoved the open book in front of the young minotaur and Xerx’ses could read it! When A’zad saw the young minotaur’s reaction he told him to read what he could and gave him chalk and a stone slab to take notes on. While the young Xerx’ses set to task A’zad explained to the community that Xerx’ses had his gift and he would be teaching him now. Groun’na was hurt to see his friend taken away from him, Mergerij saw it as a great honor and tried to comfort Groun’na. Alas, Groun’na would not hear of it and got in a fight with Mergerij and won this time. The two have been distant ever since this day.

20 years later Xerx’ses was pronounced a wizard by A’zad after having served the great mage and his community for two decades. He began to be welcomed to elder councils when many of the older members began to die from age. In another 5 years A’zad would join the departed from this world but before making Xerx’ses promise to try and free everyone from the shame of ages.

3 years ago Xerx’ses went before the council and announced the time had come for those growing up to not die in shame, there was light to be had outside. At the very least the council needed to consider opening up trade with others and begin re-joining the world. As he has watched Luur’na become a fine priestess of Isis and he has taken and interest in her, but has no idea that he has fallen for the young minotaur priestess and 2 years ago worked up the nerve to ask her to be his chosen mate. She picked Zii’clymnt instead and Xerx’ses couldn’t understand why she chose him, even though he only did things for Luur’na when it benefited him. Why was she attracted to someone that was just using her? During this time he had been sparing with Mergerij a great deal and asked him about becoming a Palladin and seeking out Darkness wherever it may dwell. Mergerij eventually made Xerx’ses distance himself as well with the constant talks about how he could better himself.

1 year ago the Elder council surprised everyone. They charged the young members of the tribe to forsake their solitude and make their own place in the world. Zii’clymnt is leaning more and more to Groun’na and his view of taking over with the Rune Weapons given to them by the tribal elders. The bladed ring makes him keep egging Mergerij for a fight and I am not sure how much longer Mergerij will hold out?

Thanks be to Zeelik for being his sounding board when Xerxses worries about what will happen to the tribe. Zeelik’s father and Xerx’ses mother became mates after his wife passed away about 5 years ago. Zeelik’s father gave his son a powerful stone rune mace and bade him become the hero Mergerij trained him to be.

The final straw for Xerx’ses was being approached by Zii’Clymnt and one of Groun’na’s followers. Zii’Clymnt accused him of being in love with her and Xerx’ses did not deny it. Zii’Clymnt began swinging at the thought of anyone stealing Luur’na away. They over powered Xerx’ses with their rune weapons and set fire to A’zad’s lab and Xerx’ses was saved by Zeelik. When Luur’na was confronted by Xerx’ses she said he was over reacting about his argument with Zii’clymnt and the fire was an accident, not on purpose. Even when Zeelik told her what he saw showing up to pull Xerx’ses from the flames she kept defending Zii’clymnt.

Xerx’ses left that night with his clothes, and what her could muster from the armory. He touched not a single rune weapon worried they might not be in tuned with him and history he has read about them makes him worried.

What price will he pay to gain the power to defeat evil?

Will it be worth it?

Zeelik gave him a going away gift his father made for Xerx’ses: Update: Xerx’ses has aided in the recovery of 7 pieces of Osiris:

Born under the sign of Aster the Centaur. Free spirits who do not like to be tied down. They crave the road and adventure, and have an insatiable curiosity.