And here we thought this was going to be hard. 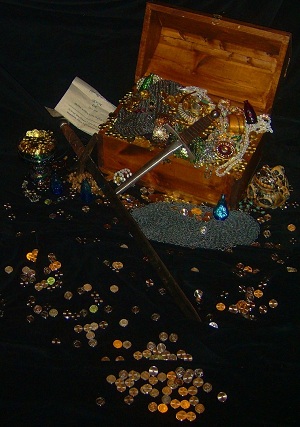 Dated this 22st day of Majestic in the 340th year of the dominion:
Anticlimax, thy name is Rhaznor. After all the build up, the loss of a member of the party and his resurrection, the travel, the flirting, and everything else the gods have put us through, for Rhaznor and his ‘army’ to have turned out this…easy?

We began by following the cowardly orcs who had declared their allegiance to us. They were going to lead us to Rhaznor’s room, where we would confront him with no mess, and no fuss. That failed as we ran unto a patrol: one ogre and seven, I think, orcs. “Kill the Ogre!” I called as I threw my axes. We killed the ogre, and the orcs ran away. They sounded the alarm, though.

Fear filled me, and I had to get away. I had to get somewhere safe. I ran back to that pit of a latrine that we cowered in before we began our final trek to find Rhaznor the weak. Through a force of will, I slowed my racing heart, and moved back to the group. I felt surrounded by enemies, but I refused to allow this to get to me. I would be an asset to this group.

We positioned outself without about ten feet of a corner in the hallway, just out of sight of the approaching ‘army’ and waited. Gavin, Cava, and Greldarr took up their position on the left side of the hall. Overkill, Myself, and Chip took up our position on the right.

We organized by height, with out most defended members at the rear, in case of a rear action.

Another pair of orcs came around the corner, and another orc died in front of Overkill. This one was Chips kill with that trident of his. Remind me never to get him truly angry.

Finally, the first one on the left fell to Cava.

Another pair of orcs came around the corner. Another orc died on the right side. The bodies began to pile up, giving us a half wall.

I decided to help out with the slow progress of death on the left this time with my axes Lion and Truth, throwing them with my might. I heard a roar from behind us, and was almost struck by chip flailing about, but I soon smelt cooked flesh from behind us, which I would later come to realize was another ogre. Greldarr, as usual, sprayed us all with blood, only this time it was our enemies blood and not his latest raw food.

Rhaznor the coward began calling out to his men to stand fast as the flanking force turned and ran. The forward force still had no idea what they were facing as we killed them too fast to sound the alarm.

More orcs fell in front of us, and then there were none. No enemies came at us any more. Nothing faced us. And Rhaznor the feckless fell silent.

We split into two groups to search for the weasel, with my group heading up to search the top floor, and the other group staying on the same floor to search. We found horses and carts.

Rahznor of the dancing blade. Rhaznor the bane of merchants everywhere. The great bandit king who commanded an army of orcs and ogres through fear. He fell to Chip, Overkill, and Cava. Half our party took him down without a scratch.

He thought to trick us as we were opening the treasure vault, but some expert lock-picking by myself, and simultaneous use of the key of the second key by Chip, got us into the great vault of the bandit.

We loaded up the wagon, saw to the horses, manacled Rhaznor, and left the kobold kingdom behind.

On the road, we met up with the kobold themselves. They claimed the kobold manufactured swords and half the gold. They also claimed Rhaznor.

We gave him to them. May he suffer for the pain he has caused others. Apis forgive me.

We finished following the kobold road, and made our way back to Father Morgan, Mary, and everything else at Fort Ac.

Dated this 4th day of Corg in the 340th year of the dominion:
I still have trouble believing it, but we have the first of the pieces of Osiris. His tongue hangs around my neck even now, and I feel its abilities seeping into me. I know how easy it would be to simply take it for my own, but I am only its steward until we can get it back to Haven.

We sold much of the items we’d appropriated from the pirates in Fort Ac to other merchants, and picked up beer in Tax. Chip and Overkill tell us that it is the best, so I believe them. 24 casks. Now if only we can prevent those two from drinking our cargo.

The priest was upset as he wasn’t allowed into the port of Nibis, but he’ll survive.

Now, as we sit here in port, in the capitol of Timiro, Credia, I wonder what other trouble might be on the horizon.

That’s all? Weak GM!! Not even a scratch? What, are you all from Heroes or something? Or did the GM become a pansy?

We just rolled too well.

“May he suffer for the pain he has caused others. Apis forgive me.”

It is intersting to see some remorse from CrIsis, considering all the in-fighting that has went on.