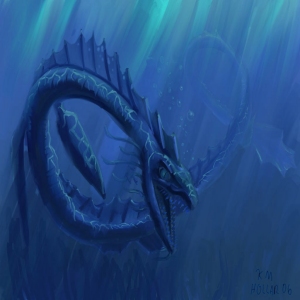 I have put aside my search — for now — at Her command to seek out the portions of Osiris, who was cleft asunder, that She might be avenged of Set.

At Her behest, I made for the Library of Bletherad on the Isle of Y-Oda and inquired after one Malkin Falimede, who put me in the company of those others who would accompany me on this new search. I made sure of them by means of the signet Isis gave to us all.

They are a small party, numbering five — excluding me — and unusual in their composition: Two strange men, Chip and Bexx, both full of mystery, a Pygmy with great intelligence behind his eyes named Chu, a Wolfen priest called Greldarr, and a Dwarf sailor Overkill.

After much disagreement over which portion to seek first, as well as which direction it should be pursued in, they have agreed to go South! Where I determined next to make my search! Could it be that Her quest will assist me on my own? I must trust Isis will show the way.

We made sail the next morning, but to my dismay the others had failed to prepare the ship with every needful thing, and we were forced to confront the ghosts at Zy to gather sufficient provisions for our journey.

The oversight is mine as well, for I did not consider provisioning the ship either. The false tranquility of Greenbough must have dulled my wits. Trusting those who have not yet proven themselves trustworthy is a mistake I must not make. Nath would kill me, if he knew.

Upon resuming our journey, we were attacked by a pirate ship, sea serpents, and some kind of large sea-ape with oversized claws. but our vessel, which appears to be constructed all of yellow wood, and is equipped with all manner of strange armaments, and the six of us, were enough of a match for all who sought to do us harm.

The next day, we were attacked again by pirates—four ships! As they moved to flank us, the Dwarf hoisted a pirate flag! of his own! and convinced them to stand down, but the priest wanted to attack them anyway! The Wolfen insisted it was to prevent them from waylaying any other poor souls, but I remain unconvinced.

We have made port at the Holy City of Haven to resupply, and have been invited by to view the Heart of Osiris by Bishop Rose Nodeki on the morrow! I am so excited that I forgot to make my usual inquiries!

They who accompany me appear to be worthwhile companions thus far, however there is much here that is not what it appears. This is not unusual when involved in the matters of the Gods, yet I can’t shake this feeling of unease.

What would Nath say?

Posted by Cava on the 18th day of Grekar, in the 340th year of the Dominion.

A little initial distrust on the part of the newest member, but that could just be his way. Seems like he is giving them a chance to prove before judging fully though. Raulf was like that at first also, too bad he was killed.