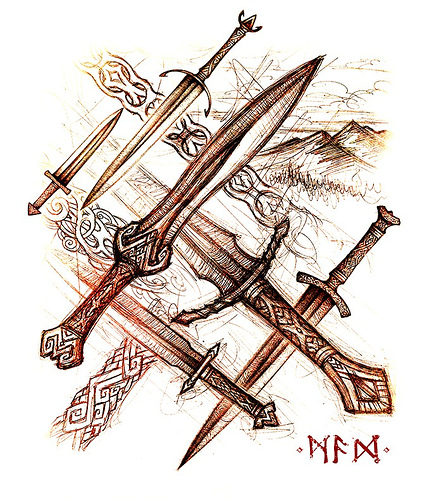 I am at a happy conundrum; what should I name the new sword? This is fantastic! I now have four (count them; four) swords of my own. The first one is my family sword, ‘Striker’ and the broad sword graduation gift ‘Hawk-Eye’ but now there are two additions to the family, a demon slayer I think I will call ‘Hot Lips-The Demons Kiss of Death’ (its a long sub-title) and King Avramson’s sword (still cannot believe that he gave it to me), witch I am not allowed to name that is called ‘Greminor’. Now the two new additions are not dwarven quality but they are equally loved (in a relative term; shut your hole, so I love swords).

I bet you are wondering what has happened since my last letter. Well as you remember I got the two swords but I could not figure out what to use them for or what they were all about.

I should have done this sooner but we’d left the city and had been two days out when we decided to go back for the mage (he wanted to learn how a new way to mumble). At any rate, I thought, Why not and most of us agreed. So we went back for winter supplies and to get reacquainted with the king. I immediately took to the local alchemist to find out about the two swords.

Now I am not sure how you feel about elves since the last time we were together and you know that I would rather be with an elf then with a backstabbing human any day (except Cava, I have taken a liking to him, which is weird as he carved me up like a chicken several months ago; amends have been good so all is forgiven) but when we approached this elf’s humble establishment he was put off by my race. Now we have meet elves that didn’t like us but I wasn’t sure if this guy was playing with me or just rude and because I really needed the information on these two swords I played along with his game. Well it was while I was talking with him that a silhouette approached him from behind and to show my good spirit (and to some degree distract me from wanting to kill him) I jumped over the counter to come at the creature.

I missed. Ever seen me attempt to be gallant and trip (almost onto my own sword by the way), yea it was like that; turns out that the guy has a ‘magic’ cat (?). I don’t profess to understand mages but he laughs at my expense and tells me of the great elf that forged the sword of King Avramson. That conceited elf has some serious talent. He forged the sword. It’s a fantastic piece of work. Almost charged me a fortune to explain it too; again I am not sure if the guy likes me or hates me as he didn’t charge me but 100 for the ‘inspection’.

The demon sword was interesting. When we picked it up from the pirates south of New Crests, I didn’t dare use it as I didn’t know if it was cursed. Some said that it had magic properties so I wrapped it and put it away. Now its on the trip.

Four swords; what am I to do? I love them but I am no Rahu-Man (though that would be cool wouldn’t it).

At any rate, I had a dream one night while wondering if Mary was healthy and alive and a impression, a voice really, told me that ‘he’ had sent his faithful servant to escort Mary. I assumed that it was Thoth as I am now his faithful servant (still digging this tattoo and I am going to show it to you when I get to see you). I do not know where Mary is right now; only that she is safe and on her way to Northolme.

At any rate I will be in your neck of the woods soon and may pay a visit provided that it is possible. I haven’t seen any family of mine and that would be great.

Take care of yourself, you bastard.

Posted by Overkill on the 2nd of Kym-nark-mar, in the 22nd year of King Bafag.

Give the extra blades to a beggar and see what destiny he carves for himself.

I say juggle them! GM is soft, giving you all those blades!