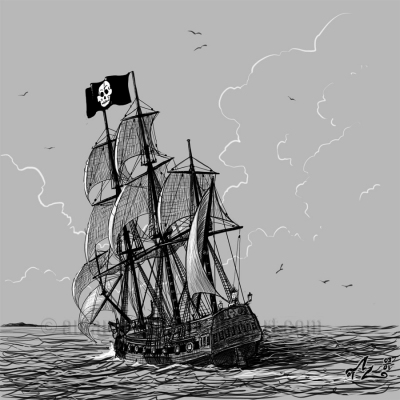 I didn’t realize that the waters were that infested with pirates. Sure the irony is this is coming from a pirate but still really? Pirates? On the plus side we defeated a fleet. Five ships came at us and, well, we tried the peaceful means with diplomacy but they didn’t recognize my flag or they ignored it. Dad would be upset that I keep turning back to piracy to do diplomacy but it worked once I thought that it would work again. At least I am not pillaging and looting. (Man I miss those days.) The battle was epic five ships came at us and after firing a warning shot (a little too soon) they fought the toughest ship in the water, CrIsis (well the ship is actually Matilda). I would not have imagined ever seeing six men fight off 40 unless I was there and I was. They had catapults and ballistas. I honestly do not give the Gods credit enough for the team that they have assembled. Perhaps my prayers will reflect that more so. At any rate when they were defeated through magic, psionics and shear force, the gods told us that we were to take the ship and goods to the nearest port. Irony drew us to a mercenary city called Ironshod. I was certain that the pirates were not going to get justice just the noose. Again the Gods pulled through for these lost souls and after their trial they were given prison time. Didn’t see that coming.

The night before the trial was perhaps a more trying time then the trials of the wicked sailors. I got into a fight. that damned wolf man creature, Greldarr decided to get personal (again). I had got sick of the cracks about the proud dwarven race and he gave the latest and the next thing I know I am attempting to crack that hairy nut job’s skull. Sure he is thrice my size, but was going to get some respect. I had hit him only once and I was certain that he would realize that despite my size I was clearly his physical superior. I was wrong and the fight continued. It wasn’t until Chip cast a spell on us to get us to keep from tearing apart the bar/inn that we stopped. That night I spent cutting wood for the bar. I did it for about two hours until my arms hurt. I hurt inside too. I cannot escape the human prejudice and the wolfen doesn’t help either with his kabob comments. We are not a united front.

I miss Bexx all the more. He was the only human that I really enjoyed. The pygmy, Chu left too (thankfully not in a fishes belly). The team keeps changing. I want to throw in the towel some times and just leave. I suppose that its the sea that keeps me going. The calm seas rock me to sleep some times and I enjoy it. Perhaps I will sleep better knowing that the team is attempting to keep one another’s back.

With that said though there are two new guys, one really handsome (thought odd) and a little man child. These humans are just as odd as humans come. When we were on the ship the man called Rell took to hiding. Apparently he had a run in with the pirates and so he hid himself. Could be the resident thief but our visit to the city changed that. He some important yahoo that appears to the courts. The kid, Gavin, has mind powers. Normally that would freak me out but I have more to worry about with changelings on the loose.

I miss home sometimes and would love the company of an other dwarf to warm my bed. Far to many times I keep running into humans who would do it but I am not interested in short term relationships but more long term. Someone who would remind me of home and my parents and sisters. So far all I have run into is an elf and a couple of humans. I wounder if the wolfen has sworn celibacy? Now I am rambling. At any rate the two new members are a good addition.

Posted by Overkill on the 5th day of Majestic, in the 22nd year of King Bafag.

Dude, you a dwarf punched a Wolfen!!! Did you hit him in the ankle or knee….
I don’t trust that “kid”…. maybe he is the changeling you keep fretting about…
Never trust a monkey!!!

OK, I have to emphasize what Overkill said in the beginning…

“I didn’t realize that the waters were that infested with pirates. Sure the irony is this is coming from a pirate but still really? Pirates?”

Wow, the irony of this statement, while using irony.

What Rell Did A rough beginning to the journey