Whew. Y’know, being a devoted, loyal follower, a willing vessel, to a goddess on a mission can have drawbacks…

Like finding oneself mounting the steps of the greatest Temple of Light this world has seen, the Antes Temple, chanting in unison the 100 names of Isis with a hastily-compiled band of believers, being led by a bishop. In a dress.

Clearly I’ve been spending too much time in quiet contemplation recently. Too long contemplating my navel… while a goddess steered my shell. What was it that Sarge’ barked at me every morning when he caught me meditating? Ah, yep…

A true sailor, Sarge’. Wonder how he’s getting on with the new recruits?

I suppose a more detailed account would be proper, but it’s been a glorious few days at sea, and I’ve got some wake-boarding to do, if cap’n MRD (Overkill) can get us up to speed… besides, I’ve been to Atlantis. I’ve seen the might and majesty of truly alien architecture. So Haven, this city of twin levels, Overcity and Undercity, really isn’t that cool. Not quite so impressive as that. And our quarters, in the penthouse suite of whatever they’re calling the “Ritz” here are nice, but not lavish. Nice, but not packed with artifacts like the magisters’ residences in Tolkeen, and certainly not as much (down homey, I’ll admit) charm as the humble but very comfortable shack Bexx and his family called home. Hmm… perhaps I’m just feeling a bit homesick. Sure isn’t sea-sickness, haw! Man the sun’s shining and the waves are beckoning… better wrap this up, pronto!

So CrIsis, as we’ve dubbed ourselves, are heading up the stairs of this giant temple, variously calling, singing, and growling out the 100 names of Isis, in perfect unison, under threat of mortal dissolution. Yep, it’s that serious. Thank the builders that they had a group like us in mind when they built the temple… wide, shallow-rise steps cause no difficulty for Chu and MRD, and even Greldarr‘s tall frame manages the steps with aplomb. Once at the top, the Bishop Rose Nodeki leads us to a small pool of holy water, where we disrobe (some under duress, but hey… what’s a communal shower between ship-mates?). I catch Bexx looking… again. Man! You think he’d be used to "it"** by now… dude must think that his people have a monopoly on “heavy equipment”.

Anyhow, I’m only mildly surprised that MRD is covered in tattoos proclaiming his identity… I’ll have to consider that for future check-points in what passes for civilization on this world… perhaps a glamer will disguise him should clothing not suffice or be available. The others are marked in small, subtle ways, which makes me question why they are so bashful about doffing their clothes… do they not realize how the goddess (and gods!) see us? I remain… perfect. As usual. Not a mole, nor a blemish. Heck, I can’t even get a sunburn! I tried piercing my ear at the behest of a girl once… took about 30 seconds for my earlobe to force the ring out and grow back to normal. I even got a tattoo, just to try to spite dad. It was my 16th birthday, and I was in the ruins of a city that used to be called “New Orleans”… the tattoo lasted about as long as the earring…but the tattooist still made me pay. Rats. When the ink came out of my skin, it made a mess of my best shirt. Looked like a gunshot wound when it dried, though, so that helped lend me some street-cred with the outlaws I was shacked up with.

Once inside the temple proper, we are introduced to a Seraph. Some loremasters from Earth called them Seraphim, and this one’s name resonates with her being: Elyth. I try not to recall too vividly Bexx’s black lab he had as a boy, named Elly, in case she’s reading my mind right now… erp! Well, save the name, no two could be more dissimilar… Elly was… stout. Black. Happy and carefree. Elyth is thin, sprouts 6 wings and is taller even than Greldarr, resplendent in golden armor and carrying a flaming sword. Obviously not care-free: she is entrusted with guarding the Heart of Osiris. Elyth makes nice with all of us, but has an awkward, oblique and cryptic exchange with Cava, our ranger. Clearly he’s looking for something, though it is difficult to tell what. Well, I’m sure we all have our secrets, past-lives lived in shadow before coming to the light…

I will not detail our journey to the Heart of Osiris, for fear that the minions of Set may stumble upon my journal, and gain thereby… besides, I promised Elyth. However, I can relate that once confronted by such an auspicious artifact, many in the group were overcome, and simply dropped prostrate to pray. An understandable reaction, given our intended course of action, but not universal. Some few of us managed to actually touch the Heart, and, while merely being in its’ presence put us into a state of calm, blissful euphoria… touching it made all other feelings shrink and shrivel in comparison. Better than sex, better than carving a perfect line through a barrel, better than the rush of being blown-out of the biggest wave Teahupo’o could come up with (and still surviving, watching the reef mere inches below your feet rushing by in all it’s glory). If I hadn’t already been touched by a goddess, this truly would have imprinted divinity upon me. Perhaps needless to say, this caused a noticeable reaction. Elyth certainly noticed. Bexx probably did, too… however, before long, our visit was curtailed and I regained my senses, if not my normal walking functions. Elyth entreated me to return to her, later, an offer I found too tempting to refuse… but that is a tale for another…
publication. 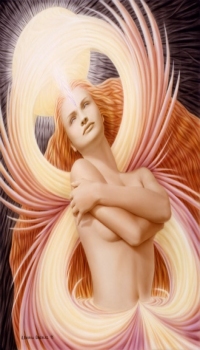 Later that evening, we dined with Bishop Rose Nodeki, who, it appears, is constrained by her badge of office to maintain a coterie of slaves… Wolven slaves. This goes over poorly with Greldarr, and, after some tense words, a bargain is struck: upon the return of the Tongue of Osiris to Haven, the Bishop will have the leverage she needs to amend the constitution of her office, and will be able to deal with the legalities surrounding the slave trade as it impacts the Church. Throughout this back-and-forth, I notice Cava eyeing our Wolven priest with something akin to respect, instead of the guarded fear and distrust. This brings back to mind the play I watched while searching for a… ahem gift, for Elyth. In one of the market theaters in Haven, a history of the creation of the Eastern Dominion or Eastern Territory was on display. I learned a great deal about humanity’s role in the shaping of the current empire
And a great deal about the relations between every other race and humans as a result…

It would seem that Emperor Prosek would fit in just fine here, in Palladium. Let’s hope that never comes to pass.

However, after our bargain with Bishop Rose, Cava and Greldarr share a tender embrace, apparently united by bonds of duty and honor, and not constrained by the skins of their respective races. Progress and unity abound! Also during this dinner, we find that the Bishop’s information about the whereabouts of the Tongue are as current as our own: it has been hijacked by a human bandit-king named Rhaznor wielding a dancing sword and leading a band of orcs, somewhere in the Timiro Kingdom. The journey to a port in Timiro should take 20-25 days, and then some more time to get to Fort Ac from the coast, so it is determined that, despite Cava’s request to have certain items blessed by the Bishop, there will be too much time elapsed for such temporary magics to avail us. Some few incantations are made in case of short-term duress, but before night is done, we retire to the suites afforded us at the “Ritz”, and prepare for our ocean voyage.

The following morning, I stumble back into our suites, more tired and aroused than I’ve ever been… it would seem that Elyth wasn’t quite through with me after our first… interview, and while I suffered a nasty shock to my system trying to breach the defenses of the temple, when I summoned Father William via magic pigeon, he was more than happy to assist in a ‘shrouded rendezvous’ between me and the angel. Once provisioned and underway, however, thoughts of Haven and the Eastern Empire fade from thought, and our minds and wills turn to the voyage at hand: to Timiro, and beyond!

So, now 5 days into that voyage, and great weather has stayed with us the entire journey. At last, we are beset by beasts… Dragondactyls if my fleeting glimpse of them as they sped away through the darkness of night is accurate, but not before they singed MRD with their fire-breath… mmm, toasty dwarf. As usual, our defenses mitigated their attacks, and they left without so much as a bite of tasty flesh. I’m sure they were hungry, and perhaps we’d strayed too close to their nesting grounds… normally they are not as aggressive with large parties as that (at least, not back home they’re not. Something to do with rail guns and mini-missiles, I’m sure).

For now… our voyage continues.
This is Chip Pico-Royas aka just Chip, signing off
dreaming of Angelic Embraces

WOW, Chip and Ursus are kindred spirits. IF it wasn’t for the fact they exist at the same time I would say that one is the re-incarnation of the other. But I would not be able to tell which came first.

He just lives the life HE wants, but is stilled cowed (ever so slightly) by the Gods and their agents.

Hope that you get to meet the player some day!

I would love to at least have a skype call with the player.

What Rell Saw. A change in purpose is not always a change for the worse.