One dwarf in a thousand has looks like this combined with a titan’s physique. Arn has never met someone stronger than him that was not using magic. He tends to avoid wearing much on his torso because its how he attracts employers, so he has bronze skin from being outside a great deal. His walnut brown hair is streaked with reddish-blonde highlights, again because a healthy, attractive looking gladiator is far easier to employ, and noblewomen will often pay for other services. Since acquiring his sword he has all of his leather died some shade of red. He will wear black or yellow to accent the red but nearly everything will be red. He will have his half suit of scales done red to make one think of a dragon.
Most used outfit: Scale mantle/shoulders, a crossed “X” bandoleer over his chest and back, scale bracers, Scale skirt that stops just below his knee, leather pants, and steel toe boots.

“HMPH! SO IT HAS COME TO THIS”

Clouds drift in the sky in what seems like random patterns that collide into each other from the view of those below. Not that this crowd is watching what a beautiful it is, all they care for is the flinging of their favorite gold Imperials and silver Raptors back and forth and the stench of sweat and desperation fill their nostrils with anxiety and excitement! All this crowd sees is the flaming warhammer in cast bronze and stone above the Central box seats of Flamma Malleum Arena. The Firehammer clan had gotten in good with the ruling regional house of the Koerdian Mountains, Oslof. They sold their shares in the mines cheap about 250 years ago to the dwarves of clan Thunderforge. Here on the sand I stand ready to try and keep my family stronghold from being sold to the Firehammers to clear our debts on Imperial taxes that creep higher every year.

I can smell the blood of the last fight, I can hear the roar of the crowd, cheering for my opponent as he enters the arena floor. This is my first fight, pity the tall fury beast is about to die. Old Firehammer has no idea I have been sleeping with his daughter and she can fight in this arena as well as any man. Wolfen, they call the shaggy 7 foot mound of fur, piss, and shite.

The fat old dwarf begins yammering on about the glory of the Empire, if he only knew last night his daughter was proclaiming me the Emperor!

The horn sounds off here comes the shaggy dog. Give them a show she says and they’ll love you for it. When I am done they will pay to wipe my sweat on their skin as perfume.

The shaggy dog leaps and blots out the sun making it easy to see him, idiot. HOWLING, he drops on me slobbering as his tongue wags. I step forward past his chest and raise my tower shield they thought would be funny because it was as tall as me, fools.

It would seem the shaggy dog HAD a manhood, well, before his legs fell to either side of this tower shield and I do believe one of his testicles just popped off and landed in the red mud in front of me, poor puppy. With a heave I toss him into the air a foot over me and 10 feet to my right, the crowd is screaming so loud some tavern whore is baring her breasts, hmm have to find that tavern later.

Stabbing the sword in the ground I walk over and pick up the testicle as the big shaggy dog called Wolfen, wolfie, something comes at me, ROARING !!! I toss its testicle at it and manage to get it in his mouth, hmph! The crowd goes silent as the shaggy dog stops to realize it just ate half its baby makers. Mmmm Tasty, I start clapping and so does the crowd! The glare from the main box is unmistakable! Firehammer must have paid a lot for this beast of a shaggy dog, braggart. Something tells me I am not longer a friend of the family, just a thought.

Oh shaggy dog wants to play! I wait till the last minute and when he can’t stop the charge I set the tower shield up as a ramp. He just gets a push at the right minute and his face eats sand a few feet behind me, more cheers and then I show them a wonder of wonders! I drop the shield move the cloth and go piss on the shaggy dog! That got his attention and he gets up to chase me, and I out run him! I grab a spear and net from the rack as I pass by, glancing back to where I left my sword in the dirt.

Here comes the finale, Firehammer, you old prick! I hook my foot making me fall forward into a roll, now I can see how close he is and he has a studded club bigger than me from the same rack. As I come out of the roll I whip the spear’s butt into my foot as I brace for the charge. His left shoulder never saw it coming and once I hear it go out his shoulder blade I roll off to his left and my right as fling the net over him to entangle the poor sod.

Shame, had they sent something after me that could think and rationalize I wouldn’t feel the need to kill it to save my own life. The net catches the shaggy dog and falters howling as the crowd jumps up and cheers. Firehammer may hate me but it’s because he doesn’t own me, I’m not his slave. Oooh, more breasts in the crowd, looks like I’ll have a pick of beds tonight.

I cry out as I reach my sword and drawing it forth I stick my thumb in the air walking back to a trapped shaggy dog. Blood today the crowd wants and Firehammer and his guests show the thumb down.

May iron nails fester in his crotch if he thinks I murder for him today.

I shove the sword through the left buttock and out the hip into the sand! A pool of red mud begins to form as I cry out to the crowd.

The crowd responses with

Firehammer is calm but furious, at loosing control of the crowd. He is no longer directing the ceremonies of this fight, old prick.

A day later I see shaggy dog in the Ludus Malleum (School of the Hammer) and I see him talking with Firehammer’s daughter. I keep my distance in the yard but near the end of the day before the slaves return to their pens he shoves a note into my hand. That night I trade all my winnings, and profits from wealthy patrons wives wishing for a good time to buy my family passage out of this forsaken region of the Empire. Death and decay stop smelling sweet when you drink them for sustenance. As they head to friends in the Scarlet Mountains with jobs waiting them there I head back to my room at the barracks. My commander dresses me up and down for for ruining his cousin’s spectacle! Piss on those damn Firehammers, they’ll whore their mother for a title so they can stand on a stool and piss on their own kind!

Now I have no job and I can’t read this note so I head to the temple of Light and Dark to beg a pew to sleep in tonight. I meet a young priestess of light dedicated to Horus so I share my story. She asks to see the note and I show her, mentioning it’s Northern trade tongue she reads it.

She told me you were told to kill me and didn’t. Go to Ophidia and find Ser Thaddeua Skozlok, he knew my father has held something for me. They got me before I could claim it. If I am alive when you come back free me and its yours to keep. Lord Crismon of the Long Knife Tribe

9 months and 23 fights later, undefeated I arrived in the northern most province of the empire. Ser Thaddeua is a retired dwarf knight and I pay for his time like any other working stiff, only I doubt it will be as fun as the scullery maid on the ship. When I told the old dwarf my tale and show him the note he hands me a box longer than I am tall! It is covered in wards and magic symbols, things best left in the past the stories say. I don’t know, there was this bloke in the Middle Kingdoms had a flaming sword that was a mite impressive, in my honest opinion. I left Ophidia that day with all the warnings about the box and what would happen if the wrong person opened it. Another 9 months and 28 fights later with everything but what I could spare for my food and lodging going via courier to the Scarlet mountains and my family. I tried to sign up with the military in another province and found out how long Firehammer and House Oslof’s arm did reach.

I found a distant cousin of House Decurance to sponsor me in the games back home and slotted me in every fight in exchange for keeping all the money but making the Wolfen my servant. The story about a debt to a fighting friend had sealed the deal, fat good noble brotherhood had done me but if that is what it took to get the Imperial Golds then so be it.

When the day was over bags of coin were passed and I had made my sponsor triple his money after buying the wolfen for me. 18 months had passed and finally we stood together again, his legs were gone at the knees and he stumbled forward! My sponsors man-servants helped him and I to an inn within the nice part of town. There House Decurance took its leave of me and this shabby province with pockets full and an offer to come fight for him more often.

I showed him the box and he smiled thanking me for the quest completed and his father could rest easy now, his spirit at peace. T’would seem Firehammer’s daughter taught him to speak the Dwarf Tongue while I was away. When he touched the box the wards flared and burned away, destroying the box and leaving its contents upon the now scorched table. The blade was the very shape of fire and the color of blood; its handle looked as though it was a flaming torch. It was then he told me the price for the blade was to free him and he could only do that with his death! I could not believe it but he wanted to die free than live a slave and Firehammer had taken everything that meant living to him for not killing me. He just wanted it over and he put the blade over his chest and spoke to it as though it were alive.

You now belong to the dwarf, Vermiculus Mortem, I release my claim on this life and you.

The crimson blade spoke back, I could hear it in my head! Before I could object the shaggy dog lept at me and impaled himself on the blade! He mouthed “thank you” and closed his eyes forever on this cruel world.

Firehammer’s day would come, by Horus, it would come. 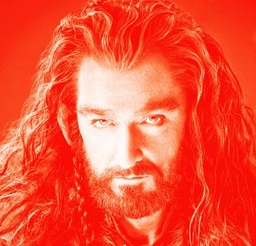