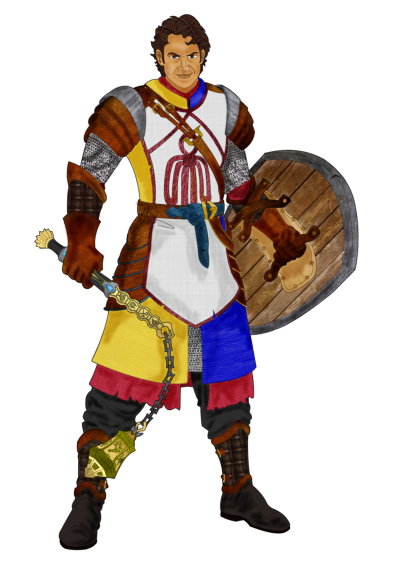 I am 5’11 with short black hair tied back with a black leather thong, hazel-eyed Southern human. Indaris has a burn mark on his left hand from an encounter with a witch, a scar in his hairline from a close call with a succubus’s sabre, a diamond shaped scar in his back from a 4 edged dirk, and a magical ring that gives him some protection from physical attack. I have an acrobatic and well defined body, doing a lot of walking and riding in the sun. I dress in chain and leather with a white tabard with the tyet or knot symbol on the front in rose, as preference when traveling as the roads are dangerous, with my holy symbol over the top, and my robes when I am working or moving through a city. They too are a similar white and Rose. My weapon of choice is my holy flail, Three Sisters of Dawn, and shield. I usually have a pouch with drawing and map making tools and a few maps about his person, and a small sheaf of pages for sketches. I tend to have a friendly smile on my face because on the whole the next person that I meet could be a lifelong friend.

Picture by our own AZ Rune.

Prayers take 1D4 attacks while in attacks, and 2D4 melees while at peace. 1 person or item/prayer. Each prayer can only be done twice/day.

These are prayers that grant special powers to the priest. Prayers take 1D4 attacks while in attacks, and 2D4 melees while at peace. Each prayer can only be done once/day.

Miracles, including great miracles, typically happen only once every 7 years for a priest. If the priest is involved in a quest the deity deems important, they may occur as often as once/year. The most flexible ability. All PPE is provided by the Deity! Prayer of Interventions

Hello,
My name is Indaris Excellar, if you are reading this it means that someone survived. It might have even been me, I hope it was me but as things go if we succeeded that will be enough. Written in the book in front of you are the hopes and joys, trials and failures of myself and maybe even countless others, but darkness stirs in the cloudy future, making guesses about. I hope someone remembers our sacrifices and learns from them so that what we have done isn’t in vain. Remember we aren’t Gods or Devils, Dragons or Syvan so our choices are part guess and part hope, and if the luck of the Gods shine upon us we will succeed in the task ahead.

I’d better give a bit of background info here, for it might help others to corroborate the Great and Terrible events of the last years.

I was born pretty much a nobody in a small town called Tanis in the Kingdom of Timiro, chances are if i hadn’t met Mudaren I would still be there, raising chickens end eking out a living with the other, not that it was a bad place, far from it, the people were friendly and helpful enough, it’s just that I would have been one with the faceless mass of the peasantry and had a mostly peaceful life.

Unfortunately I never found out Mudaren’s last name, or if that was his last name what his first name was, all I know is that he preferred to be called Mud and liked to wander into the Old Kingdom mapping its features. In fact that’s how we met. Mud had turned up at the White Fox Saloon and, lets say dropped one of his many maps, and a youngster may have found it and went out the back and started copying the map into the clay out the back. Mud noticed the map was missing and had followed me, and was surprised by what he found, which was a fairly decent copy and a muddy wide eyed boy pretending to be a Great Explorer wandering the continent. From that point on we were friends, and over the next 4-5 years whenever Mud came through he stopped off and showed new maps and told new stories and fired the imagination of a 15 year old. However on the 6th year Mud came through, heading out into the Old Kingdom, he was worried and in a hurry, he still stopped in for a day (He usually stayed a week or more) and then headed off, leaving me with his compass saying he would be back in 5 weeks. 5 weeks passed slowly, then the sixth and seventh, by that stage i was worried about him and decided to follow him, so the middle of one night I left a note for my parents telling them what i was doing and headed off in the direction he was going, as by that stage fairly competent at reading Mud’s maps and from the ones he had out I had a fair idea of which way to go. A couple of miserable weeks passed as I headed north until I made the last fort (Fort Hilde) before the old kingdom and inquired as to his whereabouts and found that he had indeed headed into the interior. Foolishly I followed, my food ran out a week and a half in, and my water 5 days after that. I was wandering around in circles, driven half Mad from hunger and thirst when I collapsed. I woke up in the confines of a rude mud and wattle hut, with some furs over me for warmth and an ancient lady tending to me. I slowly regained my strength thanks to the Old Lady (she never told me her Name) and on the 9th day she handed me back my weapons and backpack, filled with food and drink and clean, told me to be on my way. She gave me a small amulet and said it would protect me so i put it on, gave her many thanks and left and headed back to civilisation. The trek back took longer and I eventually found my way to Aracho, and while doing odd jobs here there to stay alive while i was doing some gardening the priest who’s home it was noticed my Amulet. Father Philip then told me a story of how that amulet was part of the priesthoods of the church of light and dark and that the Amulet was the Holy symbol of Isis and that I was helped by a priestess of Isis, I hadn’t been particularly devout up to that stage but I realised that a higher power had taken an interest in my life, and if that was the case I should probably thank her for it. I talked to Father Phillip about this and went and worked at the church of light and dark, and 2 years later was accepted fully into the order of Isis as a priest. To this day I’m not sure if Goddess took a direct hand in my fate but I do know I owe her my life.
My life as a city priest fairly flew by as there are always tasks at hand for those helping the less fortunate and my life was peaceful, busy but peaceful. I made a few friends at the church but none such as Father Philip, and even to this day he has been another, I wouldn’t say father figure but definitely an Uncle to me and i thank the Lady and try to walk in the light.
A few months ago my dreams started being troubled and after talking to Father Philip about them decided to take up my Cartographic tools and wander the world. My wandering feet lead me all through East Timiro and into the Eastern Territories before I wandered back, spreading the Path of Light to those who requested my aid. 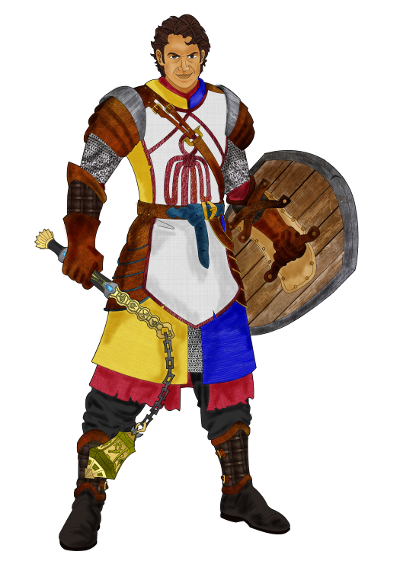